Lest we forget: a personal glimpse back through the mists of time during the Centenary of Gallipoli

EVACUATION OF GALLIPOLI
Not only muffled is our tread
- To cheat the foe.
We fear to rouse our honoured dead
- To hear us go.
Sleep well, old mates, the keenest smart,
Which more than failure wounds the heart,
Is thus to leave you, thus to part.
- Comrades, farewell.

George Reid was elected top of the poll to the New South Wales Legislative Assembly as a member for the four-member electoral district of East Sydney in 1880.lectoral district of East Sydney in 1880. He became Premier of New South Wales, then forth Prime Minister of Australia and then first High Commissioner to London (for two terms) during World War I. While outwardly supportive of our troops’ role in World War I, he held private reservations about the ANZAC deployment to the Dardanelles in 1915. He received a letter at the time from his friend, the First Sea Lord in the British War Cabinet, Lord 'Jackie' Fisher, who resigned from his position in disgust at the First Lord of the Admiralty, Winston Churchill's misguided (as Fisher saw it) push for the ill-fated Dardanelles campaign. Reid had travelled to Egypt in early 1915 where he inspected the Australian troops and was hugely impressed with their standard of training before they embarked for the Dardanelles. However my father, Clive Reid, George Reid's younger son, who was attending Westminster School in London at the time, told me that his father, George Reid, was extremely concerned about the concept of the Dardanelles because he believed it was a misguided attempt to fight the Germans through the back door and was not sufficiently thought through.

Part of the basis of Reid and Fisher's friendship was Reid's agreement with Fisher that the war could have been shortened considerably if Fisher's plan - to invade German soil from the Baltic and thus divide the enemy forces - had been put into action instead of the Dardanelles venture. It is possibly not historically recorded, but my father always said that his father had many worries about this, and he certainly discussed his concerns confidentially with close friends, including Lord Fisher. Fisher wrote to Reid when the tragedy of the Dardanelles was unfolding with mounting Australian casualties. I found this letter in my parents' attic in their Sydney home when my mother died in 1987 and I had it verified by the present Lord Fisher; it is now in the National Library in Canberra. Fisher stated in his letter: 'The inexcusable criminal disaster of the Dardanelles and no punishment for the butcher politicians - Yours till hell freezes.' (signed) Jackie Fisher. Fisher also wrote at the end of this letter 'Please burn and destroy'. One would only write this kind of confidential letter to a close friend. George Reid, as High Commissioner to the United Kingdom, would have been acutely aware of the growing number of casualties among the Australian forces on the peninsular.

According to my father, his older brother Douglas always maintained that their father soon became convinced that the whole purpose of the Dardanelles venture (after the failure of the Allied Navies made the capture of Constantinople appear impossible) was to reduce and weaken the Turkish army on the peninsula so that an Allied victory in the Middle East would perhaps be made possible - in order that the Anglo-Persian oil pipeline would be protected, and also giving access to further oil which was considered to be potentially available in the region. A victory would also prevent the Germans from having access to this oil.

Ironically Fisher, who as First Lord of the Admiralty had changed the British Fleet from coal to oil several years before the war, was appalled by the continuing Dardanelles venture. Yet it seems clear that the top echelons of the British Government were very well aware of further oil reserves in the Middle East.

There was also the urgent need to maintain control over Egypt and the Suez Canal so as to be able to maintain very lucrative trading with India and the Far East.

The Turks were eventually defeated by Allied forces in the Middle East and in the view of many, the Arabs, who had been promised the freedom from Ottoman domination, felt betrayed because the area was divided up and controlled by the British and French to serve their own interests. Several of my forbears and my friend's forebears served in the Light Horse regiments in the Middle East during World War I. These soldiers believed they were fighting for the freedom of the Arabs, so what transpired deeply concerned and puzzled them.

In 1915, the Australian government had been promised by the British, that it would be involved 'most fully' in discussions of any peace treaty. But when the time came to discuss the points contained in the treaty of Versailles, the Australians were not even informed, so that pledge was broken. However the Australian Prime Minister, W.M. Hughes, soon made his irritation very clear, so finally there was Australian representation.

Many Arabs have confirmed to me during my many visits to universities in the area during recent years, that they indeed believed they were betrayed by the Treaty of Versailles, after which the French and British divided up their lands in order to control the whole area. Arab forces had fought alongside the Allied forces against the Turks, on the understanding that they would gain their freedom from Ottoman oppression, but they found they were not free. As T. E. Lawrence said to Churchill's secretary in 1921, 'All questions of pledges and promises … are set aside.'

The official history of the Dardanelles venture was recorded in detail by Australian historian, Charles E.W. Bean, who was permitted to be present at the landing at ANZAC Cove and during the ongoing battles, by the robust intervention of Reid (as Australia's High Commissioner to the U.K.) with the British authorities. Bean was to stay on the peninsula for the whole of the campaign. He was the only correspondent to witness it from beginning to end, and having, as he was aware, a perfect vantage point for recording the Australians in action, day after day, night after night, he set down in his diaries what he was seeing and hearing and what men said when he asked them about their experiences. Like everybody else on both sides he got little sleep during the first week of the struggle. Bean with uncharacteristic vehemence rejects a common British view that Australian troops had 'advanced in an ill-disciplined rush far beyond the positions they should have occupied' (page 602 in Bean's official history of the war). 'The Australian soldier,' Bean declares 'has scattered to the winds once and for all, the notion, often reiterated, that an Australian force would be ineffective through lack of discipline.'

Indeed Bean insists that Australians displayed a remarkable kind of self-discipline, which obliged every man to pay no heed at all to shell fire 'even so much as by turning a head or by lowering the pannikin from which he was drinking.' The landing dissolved all doubts about the relations between the Australian men and their officers, since the appointed leaders revealed 'character and competence.' Bean resolved from the start to offer as a memorial to the soldiers a full and accurate account of what they had done, conceiving it to be his duty, as he puts it in the preface, 'to record the plain and absolute truth so far as it was within his limited power to compass it.' The modesty was genuine; but he knew that he was uniquely well placed to do the job, having observed the men of the AIF at close hand for four years. The odds must have been long against his surviving it all to become their historian. Bean was struck in the leg by a stray Turkish bullet, while following the column of Brigadier General Monash's 4th Infantry Brigade at the start of the Battle of Sari Bair. Despite the wound, he refused to be evacuated from the peninsula. He left Gallipoli for good on the night of 17 December, two nights before the final evacuation. He would return in 1919 with the Australian Historic Mission.

As an Australian journalist, war correspondent and historian who is renowned as the editor of the 12-volume Official History of Australia in the War of 1914-1918,  Bean wrote Volumes I to VI himself, which dealt with the Australian Imperial Forces at Gallipoli, the Middle East, France and Belgium. Bean was instrumental in the establishment of the Australian War Memorial, and of the creation and popularization of the ANZAC legend.

My father, a barrister, joined the Australian army in World War II. Bean told my father, some years later, that he was hugely appreciative of the immense efforts made by George Reid to persuade the British authorities to permit him to be present during the Dardanelles campaign. He also said that eventually the Australian forces would be also fully recognized - not just for their role at the Dardanelles, but also for their heroic efforts in Northern France, which is now certainly deeply appreciated by the people of Villers-Bretonneux.  After the war my father said he often discussed with Bean the concept of the Sydney to Canberra 'Remembrance Driveway,' which my father helped create because he felt so deeply about the losses sustained by Australia in both World Wars. Also his older brother  Douglas lost his two sons, Bruce and Ian Reid, in World War II. My mother's two brothers, Colin and Keith Ross Munro, were killed in World War I.

One result of Australia's faithful and sacrificial effort to the cause of WW I was an enhanced international status. After the war, the question of Dominion independence arose. As Australia developed a diplomatic service, the government pressed for more autonomy from Britain in enacting laws. The Statute of Westminster 1931 (UK) was passed by the Imperial Parliament in the UK and established legislative equality between the self-governing Dominions of the British Empire. In effect it gave the Dominion parliaments equal status with the British Parliament, and established that the dominions were under the authority of the Crown as opposed to the government of Britain. Australia finally ratified this law in the Statute of Westminster Adoption Act of 1942.

I am certain that my grandfather would have been extremely proud of the positive symbolism of Australian 'mate-ship' galvanized under horrendous circumstances during World War I, which has emerged as symbolic of our way of life. I never knew my grandfather - I was born many years after he died. He married my grandmother, Flora when he was fifty and she was twenty.

I have done considerable research into his life and written about his and his wife's contribution to Australia. Flora as one of the first women to receive the title of Dame; this was bestowed for her huge contribution in caring for the wounded Australians in the U.K, where she was living during World War I as the wife of Reid - the High Commissioner. According to my father she always spoke of the strong spirit of 'mate-ship' which existed among all the man she helped.

I believe the Turkish people should also be remembered on ANZAC DAY and honoured – since they also lost many men during the fighting. 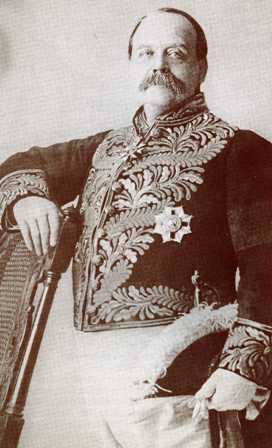 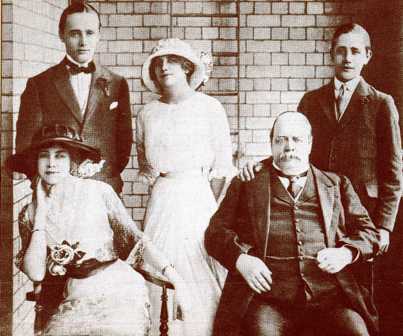