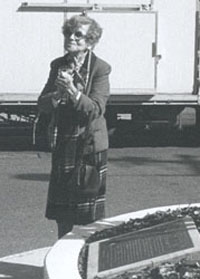 Alice Doyle, restaurateur and businesswoman, was born Alice Eva Everitt on 22 August 1911, at Watsons Bay, the youngest of six children of Eva and Charles Everitt.

Alice’s family had a long association with Watsons Bay, her grandfather Henry Newton was one of the earliest fishermen living at the Bay.  In 1885 Henry and his wife Hannah opened tea rooms in a weatherboard cottage on the site of the future restaurant Doyles on the Beach – the restaurant which Alice would later develop and take to international success. 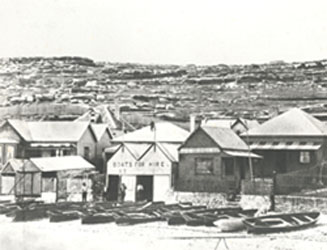 The first tea rooms built by Alice’s grandparents Henry and Hannah Newton, on the site of the later restaurant ‘Doyles on the Beach’, Watsons Bay, late 20th century.

By 1908 the Newtons had built a new two-storey refreshment room, the Ozone Cafe, on the same site as their earlier tea rooms.  Meanwhile in about 1903, Alice’s parents Eva and Charles Everitt had opened tea rooms known as Everitt’s Signal Dining Rooms (or the Signal Tea Rooms) in Watsons Bay opposite the Signal Station. Eva and Charles appear to have been at the Ozone Cafe for a couple of years after it was rebuilt and then it was leased to various proprietors until the end of the First World War when the Everitts returned (Sands Directories 1909-19).  The Ozone Cafe proved to be ideally situated for tourists and day trippers, being close to the ferry wharf and the tramline which had been extended into Watsons Bay in 1909.

As a young girl Alice attended Watsons Bay Public School and later Vaucluse Public School.  After leaving high school, Fort Street Girls School, she enrolled at the Metropolitan Business College to learn to type and do shorthand.  Alice had a great love of her home Watsons Bay and had many fond memories of growing up there. She particularly enjoyed swimming, water sports, tennis and dancing. 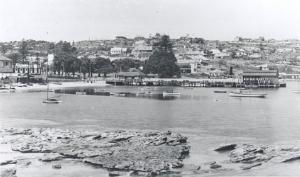 Alice met Jack (Thomas John) Doyle, a printer, at a party at the Ozone in 1929, and in 1931 she and Jack married at St Peter’s Church, Watsons Bay.  Feeling the effects of the depression Alice’s parents were forced to close the Ozone Cafe in 1933 and Alice’s father Charles, then converted the building into flats.  Alice and her family, now including her 4 sons Peter, John, Michael and Tim, moved back there in 1937 (Peter Doyle, King Tide, p.8).

It was while Jack was away on duty during the Second World War that Alice began to dream of reopening the Ozone Cafe. Despite some early misgivings Jack agreed, and after Alice secured a loan from her mother, the cafe opened on 28 March 1948, serving fish, and scones with jam for dessert. Alice, Jack and her mother Eva worked hard at establishing the business Eva upstairs cooking the scones; Alice working the front of the cafe and Jack cooking fish in the kitchen. Offering outdoor seating at the Ozone from the early days, Alice and Jack pioneered the introduction and acceptance of outdoor eating across Sydney restaurants.

Following her mother’s death in 1957, Alice and Jack purchased the freehold in the Watsons Bay property from Alice’s family but in order to raise the finance Alice was forced to sell the business.  Soon after, however, the opportunity arose for Alice and Jack to obtain the leasehold of the Pier restaurant at Rose Bay and so in 1958 another restaurant began.  In 1967 the lease on the Watsons Bay restaurant ended and the Doyle family was finally able to return to their much loved restaurant.

After the family’s return to the Watsons Bay restaurant, the old Ozone Cafe became known as Doyles Restaurant. Some years later the restaurant was rebuilt and opened by the then premier Neville Wran in 1982. The following year in January 1983 Doyles closed its restaurant at Rose Bay.

There are many stories of Alice’s warmth, love of people, generosity and community spirit.  Throughout her life Alice was involved with charity work; during the depression she ‘made sure anyone who was hungry got fed’ (Vince Marinato, Wentworth Courier, 8.12.2004, p.19), she organised card nights to raise money to hold Christmas parties for the local children; she raised money for the disadvantaged and even in the last year of her life ‘she had the oldies over to regular luncheons and carried on with the charity events’ (Vince Marinato ibid.).

Alice greatly enjoyed writing and was the author of Doyle’s Fish Cookbook, first published in 1979 and reprinted numerous times.  It was revised in 1999 and 2005 as Doyle’s Seafood Cookbook.  Alice donated all royalties from the book to various charities such as the Sydney City Mission, St Luke’s Hospital and the Cystic Fibrosis Foundation.

Alice was awarded the Member of the Order of Australia (AM) in recognition of her services to the restaurant industry and to the community in 1987.  In 1998 Jack was awarded the Medal of the Order of Australia (OAM) for his services to business and commerce as a restaurateur and to the community through charitable organisations.

Alice Doyle dedicated herself to creating and establishing a successful family restaurant business.  She understood the importance of good customer relations and her gregarious, friendly nature meant her customers always felt welcome.  The restaurant where it all began, Doyles on the Beach, has since won numerous awards and has enjoyed an international reputation as one of Sydney’s best seafood restaurants.