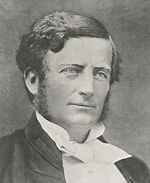 George Thornton was born on 23 December 1819 in Macquarie Street, Sydney, the son of Samuel Thornton (c1782-1842) and Sarah Thornton (nee Madden; c.1790-1827). Samuel and Sarah were married in London in about 1810. In 1813 Sarah was arrested and tried (as Sarah Thorn), along with two other women, for stealing cards of lace from a shop in London.  She was found guilty, despite one of the three confessing to being the only perpetrator of the crime, and transported to New South Wales for life.  Sarah travelled on the Broxbornebury, arriving in Sydney on 28 July 1814.  Samuel followed her a few months later as a free passenger on the Somersetshire. Sarah, who had travelled with their young daughter and gave birth to another son on board the ship, was placed in the Female Factory at Parramatta until Samuel arrived.

Initially working as a tailor, Samuel later set up a business as a publican in George Street, Sydney. In 1839 he received a grant of 100 acres at Bankstown, where he raised about 20 head of cattle and sold salt pork.  As a child George was provided with a good education – first at St Phillip's primary school, then W.T. Cape’s academy in King Street and Rev. J.D. Lang’s Australian College.

George married Mary Ann Solomon at St Phillips Church of England, Sydney, on 4 August 1840. They had five children between 1841 and 1856: George, Frances, James, Florence and Fanny.  In the 1850s George and his family were living at Nelson’s Bay, Coogee.

In about 1836 George joined the Customs Department as a storekeeper and by 1840 he had set up his own business as a customs house agent in Elizabeth Street.  In April 1849 he advertised the formation of a partnership with Walter Church operating as customs house agents and shipbrokers. The business was known as Thornton and Church and was based at Customs House, Circular Quay.  In 1859 he joined the firm Tucker & Co., wine and spirit merchants situated in George Street.

George Thornton’s political career began in 1847 when he was elected to the Sydney Municipal Council for Cook Ward.  He served as mayor in 1853 and again in 1857.

Throughout his career Thornton held various positions on numerous boards, such as director and chairman of the City Bank of Sydney, trustee of the Savings Bank of New South Wales, and chairman of the Mutual Insurance Society of Victoria. He was a New South Wales commissioner for five international exhibitions and in 1880 he sat on the royal commission into the fisheries.  He was appointed a magistrate for the district of Sydney in the mid 1850s. He was a Freemason under the Irish constitution, and founding provincial grand master from 1857-67.

Thornton had a great passion for water sports and participated in regattas on Sydney Harbour.  He was vice-commodore of the Sydney Yacht Club in 1859, a founding member of the Royal Sydney Yacht Squadron in 1862, and founding president of the Sydney Rowing Club and of the New South Wales Rowing Association.  He was treasurer on the committee of the inaugural Double Bay Amateur Regatta held on 1 January 1867.

In August 1856 a number of allotments at Darling Point along Yarranabbe Road were offered for sale by the auctioneers Bowden and Threlkeld.  On one of these allotments facing present day Thornton Street a house called Longwood was built.  George Thornton purchased this house at an auction sale in March 1859 for £2500.   In 1862 Thornton engaged the architect William Weaver to carry out alterations and additions to the house, with further alterations and additions carried out to the design of the architect G. Allen Mansfield in 1872.

Thornton and his family made a number of trips to England and in preparation for his planned trip in 1864, Thornton advertised the sale of his household furnishings for sale – including items such as pianos, cut glass and sterling silver as well as outdoor items such as buggies, dogcarts, sailing skiff and chaffcutter, and also ‘four thorough good Cows and Spanish fowls’.

A further sale of Thornton’s effects at Longwood was advertised in 1876, after which Thornton left the Woollahra district – his next address being Manly, where he built the house Altamira. By late 1884 he had left Manly, and in the ensuing years he moved to a number of different suburbs.  According to the Pictorial History of Canterbury Bankstown during the 1880s Thornton built the house Carysfield at Bankstown.  This house still stands at 2 Sussman Avenue, Bass Hill.  He eventually settled in Parramatta at another house he reportedly built, Lang Syne in Sorrell Street.

Thornton continued to lease Longwood at Darling Point until it was sold in the early 1890s.

George Thornton was officially nominated as councillor for the new Woollahra Council on 21 May 1860 by John V Gorman and seconded by Mr Durham. At the poll taken on the 28 May he received 63 of the votes counted and was subsequently declared elected.

At the first meeting of Council held on 6 June 1860 George Thornton, in his absence, was elected the first chairman of Woollahra.  His nomination was proposed by John Gorman, seconded by Thomas Bowden and carried unanimously. George Thornton’s background with the Sydney Municipal Council enabled him to provide the fledgling council with invaluable experience and advice. He was one of three councillors appointed in 1862 to prepare by-laws for the new municipality. Thornton declined to seek re-election as chairman and was replaced in this position by Samuel Thompson in February 1861.

Thornton resigned from council in February 1864 due to his planned departure for England.  On his return from England the following year, the ship on which he was travelling, the Duncan Dunbar, was wrecked on a reef off the coast of Brazil on 7 October 1865.  Thornton took a leading role in establishing some order after the accident, and following their rescue 10 days later, the passengers presented him with an address thanking him for ‘his untiring exertions’ on their behalf noting that is was ‘impossible to over-estimate the value of such services’. He was further honoured for his role in the rescue on his return to Australia in 1866.

George Thornton had moved to his house Lang Syne, at Parramatta by 1896.  He died there of dysentery on 23 November 1901, aged 82.  He was buried in Rookwood cemetery and was survived by his wife Mary Ann and daughter Fanny.  Thornton’s obituary in the Sydney Morning Herald lamented the passing of ‘one of the most picturesque characters which have graced the political and sporting life of New South Wales’.  He is commemorated in Woollahra in the street Thornton Street in Darling Point, in the City of Sydney by an obelisk (Thornton's 'scent bottle') erected in 1857 in Hyde Park, and by a figurehead on the Westpac Bank in Kiama, built in 1887 as the City Bank of Sydney.