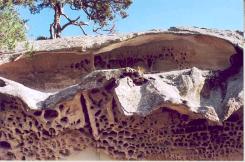 Rock shelters or caves are found in outcrops of rock, such as sandstone or granite, where an overhang has formed a cave-like shelter. In many cases, deposits have formed inside rock shelters where ashes from fires, material falling from the roof and other sediments have accumulated within the protection of the overhang. Archaeologists excavate these deposits to find evidence of fireplaces, discarded tools and food remains. Such evidence provides important clues about how Aboriginal people used rock shelters as living quarters. 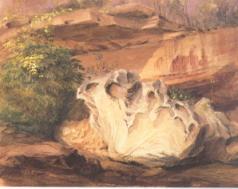 The remains of fires, which are rich in phosphates, were used by early European settlers as a source of fertiliser for their gardens.

Often shell middens are found close by rock shelters, while many rock shelters also contain rock paintings. Rock paintings were made using paints or pigments obtained from the earth or from fire, such as red and yellow ochre, white pipeclay, gypsum and charcoal. Such material was ground up and mixed with water to make a paste, which was then used to make stencils of human hands and feet, animal feet, boomerangs, woomeras, axes, baskets, pipes and shields.

Stencil art is very common in the Sydney Basin and was made by blowing wet paint from the mouth over and around an object held against the rock. Stencils of hands are the most common form of rock painting found in the area.

Rock paintings are very important as they provide valuable information about tools and weapons, as well as hunting methods and ceremonial gatherings. Many sites are of sacred or ceremonial significance to Aboriginal people and should not be visited or photographed without first gaining the permission of the Aboriginal community.

Rock paintings are usually extremely fragile and special care should be taken not to touch the painted walls of a rock shelter or to accidentally brush up against them.