View all plaques in Watsons Bay 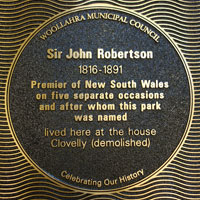 Sir John Robertson, pastoralist, land campaigner and politician, was Premier of New South Wales on five separate occasions. A prominent local identity of Watsons Bay, he lived at Clovelly and owned large areas of land around the bay. He is best remembered for his campaign for changes to land ownership, in particular the Crown Lands Acts of 1861.

John Robertson was born on 15 October 1816 at Bow near London, the son of James Robertson, watchmaker and pastoralist, and his wife Anna Maria, née Ripley. The family immigrated to Australia, arriving in Sydney on the Providence on 8 January 1822.  He was educated at Rev J.D. Lang’s primary school and under J. Gilchrist and W.T. Cape. He visited England, Scotland and France in 1833 and on his return to Australia in 1835 he joined his father on the land at Jerry's Plains, on the Hunter River, working as a station manager. He married Margaret Emma Davies on 9 May 1839 and the couple settled as wheat-growers near Scone. By 1840 he was licensee of a property in the Liverpool Plains. John and Margaret had 3 sons and 6 daughters.

At the first elections for the NSW Legislative Council in 1843 Robertson won the County of Durham seat. By the mid-1840s Robertson's political views were based on his understanding of rural problems and the need for responsible government for the colony.

In 1856 Robertson won the seat of Phillip, Brisbane and Bligh at the first parliamentary elections. His electoral platform was ‘manhood suffrage, vote by secret ballot, equal electoral districts on population, abolition of state aid to religion, national education, free trade, and free selection of crown lands before survey’.  Throughout the 1850s and 1860s, determined to break the established land-holding monopoly of the squatter-pastoralists, he campaigned forcefully for changes to land ownership. He introduced the Crown Lands Acts 1861 (NSW) which transformed land ownership in N.S.W. by opening up free selection of Crown land. Robertson played a key role in the creation of the National Park (later Royal National Park) in 1879.

Throughout his career Robertson suffered periodic financial difficulties. In 1870 he was declared bankrupt and he resigned his seat, which he regained the same year after money was raised for the benefit of his family by a committee formed for this purpose.  Robertson resigned his seat in 1886, and again with financial troubles he received a grant from the government of £10,000 in recognition of his past thirty years of service.

He was made Knight Commander of the Order of St Michael and St George (KCMG) in 1877.

In 1864 Robertson and his family moved to the house Clovelly (in later Robertson Park) at Watsons Bay. The house had been built in 1834-5 by Thomas Watson, master mariner and pilot at Watsons Bay, and named Clovelly by its subsequent owner Hannibal Hawkins Macarthur. The Robertson’s purchased the property in 1878 and made a number of changes to the house.

During the 1870s and 1880s Sir John amassed a large area of land at Watsons Bay when he purchased the Beaconsfield Estate in 1877 and other allotments from the Town of Watsons Bay subdivision in the early 1880s. After his retirement from politics he subdivided and offered his Gap Hotel estate for sale, as well as part of his Beaconsfield Estate, in 1887. A ‘great clearance sale’ of his property was held by order of the mortgagees of his estate in 1892. He was a prominent figure at Watsons Bay and interested in local affairs. He operated a ferry service between the bay and Sydney from 1881.

That remarkable and genial public man, Sir John Robertson, of mature years, who lived at “Clovelly” Watsons Bay, … habitually for years would ride on his old white horse out to his home at any time of the day or night along this lonely road … Sir John was conspicuous by his flowing white hair and beard, which gave him a grand patriarchal appearance, and he was greatly esteemed by all sections of the community.

After Robertson’s death in 1891 Clovelly remained in private ownership and was allowed to deteriorate until it was declared unfit for human habitation in 1902 and subsequently demolished in 1903.  The grounds of Clovelly became a popular place for picnics and calls to have them resumed for a public park eventually led to the handing over of the land to the public in 1906. Vaucluse Council was appointed as trustee and the newly formed park was named Clovelly Park. In 1909 it was renamed Robertson Park in honour of Sir John. Robertson Place (formerly Gap Street) was also renamed in his honour. 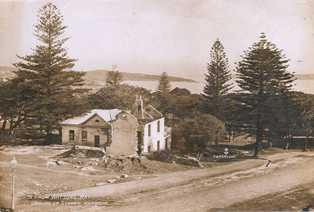 According to his biographer Bede Nairn, ‘Robertson emerged as the most representative New South Wales colonist of the 1850s, moulded by his personal and perceptive experience of the main forces that had shaped colonial society and politics: the competing claims of convict and non-convict elements, as moderated by the role of the native-born; the complex movement for representative government; and the demands of the squatters for security of tenure with the help of the British government and at the expense of the majority of colonists. No other politician had such sympathetic insight into the texture and subtleties of the radical needs of the times’.

Lady Margaret died on 6 August 1889 at Watsons Bay and Sir John died also at Clovelly on 8 May 1891. He is buried beside his wife at the South Head Cemetery. A stone obelisk designed by John Horbury Hunt stands over his grave. His daughter, Margaret-Emma, married Nicholas Miklouho-Maclay who built the first Marine Biological Station in Australia at Watsons Bay. A statue of Sir John, unveiled in 1904, stands in Art Gallery Road.