Sir John Hay was a Scots-born pastoralist, businessman, quiet philanthropist and long-serving parliamentarian of colonial New South Wales, who had connections with a number of properties situated within the Municipality of Woollahra.

Parentage and education in Scotland

John Hay was born on 22 June 1816 in the Little Ythsie region of Aberdeen – the son of John Hay (born c.1790) and his wife Jean, née Mair (born c.1794). While his father was a farmer, John appears to have initially pursued a career as a reader, graduating in 1834 as an M.A. with honours from King’s College Aberdeen, prior to reading law (unfinished) at the University of Edinburgh. In the parliamentary career which occupied the second half of his adult life, Hay doubtless would have drawn upon the intellectual rigour of his formal education. However, for the first twenty years after his marriage and emigration to the colony of New South Wales, the skills and knowledge learnt from his father’s calling would have had greater relevance, albeit put into practice on the other side of the world and in a very different physical environment.

Marriage, emigration and the squatter’s life

On 28th February 1838, John Hay married Mary (c.1820–1892) the daughter of James and Mary Chalmers and the couple embarked on their passage to Sydney aboard the Amelia Thompson, which sailed into Port Jackson on 1 July 1838. Within six months of their arrival, John Hay had taken up Welaragang Station – 22,250 acres on the Upper Murray, in the district today known as Albury. This began an expansive program of land acquisition, which earned Hay membership, in the popular mind, of the “squattocracy”, that peculiarly Australian elite of the nineteenth-century. More significantly, Hay’s pastoral success allowed him to pursue other fields of interest, notably his long involvement in the government of New South Wales for which he is probably best known, and which brought him to Woollahra as a resident. For the first eighteen years of their marriage however, pastoral interests and responsibilities bound both John and Mary Hay to the south-western region of New South Wales.

Sir John Hay’s service in Macquarie Street was distinguished by its timing, longevity and breadth. Elected to the first Legislative Assembly following the introduction of responsible government in New South Wales, he stood at the forefront of local parliamentary history. Hay went on to serve for a total of thirty-five years in a career which spanned both chambers, and successively represented three constituencies during his time in the Assembly.

In his first years in elected office, Hay showed occasional lapses in judgement, scoring political points but losing broader appeal. Spearheading the overthrow of the Cowper government in 1856 won him few friends and only a short-lived political ascendency, while his passionate opposition to Robertson’s land reforms in 1860 left him open to charges of self-interest. As his political performance matured he was elected Speaker, a role in which he served capably between 1862 and 1865, and with his resignation from the assembly in 1867 he was appointed to the Legislative Council, taking on its leadership as the Council’s President in 1873. Hay died while still exercising this office, and was ultimately remembered as “one of those calm, clear intelligences of the House, rare in all Parliaments, to which all parties equally look up.” (Freeman's Journal 30.1 1892 p.13)

In the mid-1850s, John and Mary Hay moved to Sydney, living firstly in the locality today described as West Woollahra, and then taking tenancies of Frederick Tooth’s Buckhurst in Rose Bay and Henry Mort’s Mount Adelaide in Darling Point. By 1866, the Hay family was settled opposite the Rose Bay foreshore in the Cooper family’s Rose Bay Lodge, establishing the home where they would remain for the rest of their lives. The substantial cottage, built in the 1830s for James Holt on Cooper-owned land, had benefited from spasmodic occupation by members of the Cooper family. During these interludes in the 1840s and 1850s, various additions and embellishments enhanced its amenity.

Rose Bay Lodge had been the scene of some brilliantly spectacular social events during the Cooper family’s period in residence. Given an obituary which recalled him as a man of simple tastes, it seems likely that Hay entertained more modestly - though by no means less generously, since contemporaries also placed on record his kindliness and hospitality. James Arthur Dowling relates having been a regular visitor to the house during Hay’s time (Dowling p.53) while Glynde Nesta Griffiths writes of Sir John and Lady Hay being “much loved”, and refers to the beautiful garden which surrounded the Lodge (Griffiths p.163) in evidencing the sociability of the couple. John and Mary Hay took responsibility for the welfare of two orphaned children, John Hay Fowler and Jane Brennan, with whom they shared their home and family life. The couple had no biological offspring.

Sir John and Lady Hay died some ten days apart, each at Rose Bay Lodge, twenty-six years after they first took up residence.

In 1878, John Hay was appointed a Knight Commander of the Order of St Michael and St George. His public life and career is also commemorated in enduring form in the name of both a city street and a rural town – a fitting tribute to a man whose interests straddled both rural and urban centres of activity. The township of Hay was gazetted as such on 7 October 1859, while Sydney’s Hay Street, often supposed to derive its name from the hay market once nearby, is in fact a further commemoration of Sir John. The small street named for him in Vaucluse reflects his one-time ownership of the associated land.

John Hay’s legacy in the modern municipality of Woollahra endures in the form of two physical features of the landscape – the water source known as “Emma’s well” in Rose Bay, and the remnant garden which survives in the property Overthorpe in Edgecliff. Both derive from local landholdings over and above Hay’s occupancy of the Rose Bay Lodge estate. The Edgecliff acreage where Hay created a garden acknowledged as significant both in his own time and since, was leased from the Cooper lands, while the supply of Emma’s well originates from one of several parcels owned by him in the Towns Road locality. When marketed in 1892 as part of the late Sir John’s estate, this parcel - an allotment of just less than 12 acres - was billed as “The Springs”; earlier, on an 1889 Municipal Map, the allotment was labelled as “St Agnes Fountain”. Both titles suggest the aqueous properties of the land.

The so-called “well” owes its existence as an unfailing water source to the cooperative spirit of Hay, who when approached in 1876, gave permission for Woollahra Council “to divert a sufficient stream of water from his land to supply the trough” (WMC Minutes 9.2.1876 p.312). The trough referred to was a planned roadside provision for the benefit of thirsty horses negotiating the steep climb out of Rose Bay, to be accompanied by a set of iron drinking cups for the benefit of thirsty men. It was to replace in situ an earlier set of “tubs” positioned at a point on the eastern edge of New South Head Road where water, seeping naturally from Hay’s land above, emerged from the rock face below. When in the 1930s this place was proclaimed as “Emma’s well” by the installation of a plaque, the decision sparked considerable debate. Among the voices advancing the claim of various alternative names were those of long-term residents with memories reaching back into Hay’s era, advocating (vainly) for a re-naming as “St Agnes Fountain” to mark his link with the site.

Hay’s greatest legacy in Woollahra is the surviving portions of a landmark garden he established and nurtured, today most closely associated with the Overthorpe property at 337 New South Head Road Edgecliff. The original garden had sprawled well beyond the later-established Overthorpe boundaries, taking in over 5 acres of the hillside beneath the Edgecliff-Woollahra ridgeline, with frontages to New South Head, Edgecliff and Manning Roads.

On this land John Hay fostered a specialist garden supporting a botanical collection of predominately rainforest species, many of them rare. Based on surviving portions, present-day horticulturists have claimed that his plantings cumulatively created a micro-environment “indistinguishable from a natural sub-tropical rainforest” amongst which compatible remnants of the original vegetation also thrive. (Morris, p.3) The collection of rainforest plant species has been judged as “arguably second only to the collection in the Sydney Royal Botanic Gardens” with palm plantings “easily eclipsing the significant palm grove in Vaucluse House gardens” (State Heritage Office.)

It seems unlikely that Hay had intentions for the site beyond this “experimental garden”, with all improvements made over several decades being in keeping with that focus. A gardener's cottage was erected, as were retaining walls, a large pond, and a series of scattered structures consistent with use as potting sheds and green houses. Contemporary maps label the site simply as “Sir John Hay’s garden”. 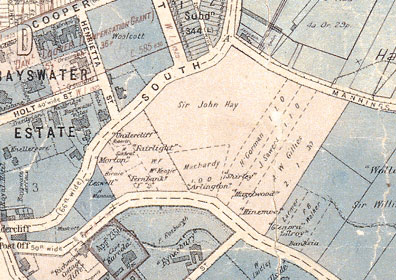 The fact that so much of this horticultural collection survives, despite the subdivision and residential development of the land after Hay’s death, is a testament both to Sir John's initial vision, and also to those subsequent lessees and owners who recognised and respected the value of what he had created. Real estate agents and business partners Tom Raine and Herbert Clarke, as early custodians of the newly subdivided leasehold, played a significant role in its preservation.

A 1905 description of Raine’s garden, setting for his E A Scott-designed house Guyong, acknowledged the foundations laid by Hay and built upon by Raine, praising the extent and diversity of important plantings (“every “lilly-pilly known”) and singling out for especial comment the large pond filled with Indian lilies. This feature may well have had its inspiration, and possibly its physical genesis, in the pond within Hay’s garden. The writer also paid tribute to the plantings added by Raine to continue Hay’s theme, and noted the remarkable growth produced by the fertile soil, created with additives and introduced soils to counteract the high sand content of the natural base. (Daily Mail 11.1.1905 p. 94)

Raine’s neighbour, Herbert Clarke was responsible for building the house Overthorpe on his portion of the acreage, and under both his leasehold and the successive ownership of William Anderson, the plantings of Sir John Hay were permitted to flourish. Some eighty years later, with the Overthorpe site poised for a major redevelopment, an examination of the heritage value of both house and grounds began, and it was decided that the most notably evident and intact portion of Hay’s plantings lay on that property. Legislative protection was delivered for Hay’s legacy - though not for Clarke’s former house, demolished to allow for a complex of dwellings designed under orders to respect the heritage of the setting. 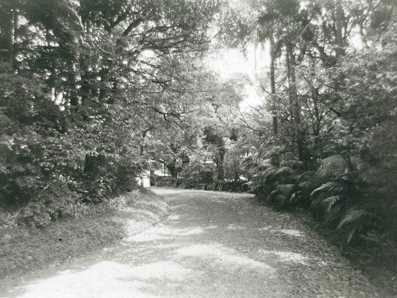 The garden and driveway of Overthorpe on New South Head Road, 1974

Under the terms of the heritage listing it was expressed that the gardens of Overthorpe, and portions of several neighbouring properties, collectively support “the largest and most significant botanical collection of rare and exotic Australian rain forest species in the Municipality.” (State Heritage Office)

Sir John Hay's inspiration and purpose in creating this lush paradise presumably fulfilled a personal interest and a creative impulse. Being visible from various public vantage points, the Overthorpe garden can be considered a bequest not only for the current residents of the land, but for the local community.