View all plaques in Edgecliff 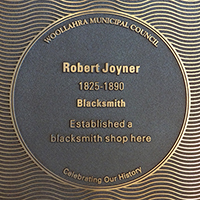 Robert Cornelius Joyner was born in Cheltenham, England in 1825. He was the son of a farmer and as a young man he did casual farm work. The Joyners were traditionally blacksmiths and in the mid-1840s Robert moved to London to learn the blacksmithing trade. In 1850 he left England to join his brother on the goldfields of California. After a year he sailed for Sydney before heading for the Victorian goldfields.

Robert returned to Sydney in 1856 and established a blacksmith shop in a timber building he erected on land he leased at 496 Glenmore Road, Paddington.  In the same year Robert married Rhoda Waterman, daughter of Michael and Alice, at Paddington. The couple went on the have eight children, Robert, John, Charles, Rhoda, Thomas, Alfred, Jessie and Sarah.

Robert soon became a respected member of the community and was elected an alderman on the newly formed Paddington Council at a poll held on 9 February 1864. In 1910 it was noted that while on Council he ‘assisted largely in having the Borough … divided into wards’ (Paddington its history trade and industries’, p.104).  He resigned his position on Council due to ill health in 1871.

Robert’s blacksmith business was a family affair and became known as ‘R. Joyner and Sons’ in the mid-1880s.  After Robert’s death in 1890 the business was carried on by his sons, Robert Walter and Thomas Henry, and Thomas’ son Ralph Ashby, all the while assisted by other members of the family.

The Joyners were highly skilled in all aspects of their trade and examples of their work can be seen throughout the eastern suburbs. The architect Horbury Hunt engaged Robert Joyner to make latches and hinges inside Rose Bay Convent. Robert also carried out work for St Marks Church, Darling Point such as maintenance work on the bells.  Robert (along with his descendants) was a bell ringer at St Marks and a member of the St Marks Hand Bell Society formed in the early 1860s. The Joyners were hired by local councils, Paddington and Woollahra, to carry out work for these municipalities. 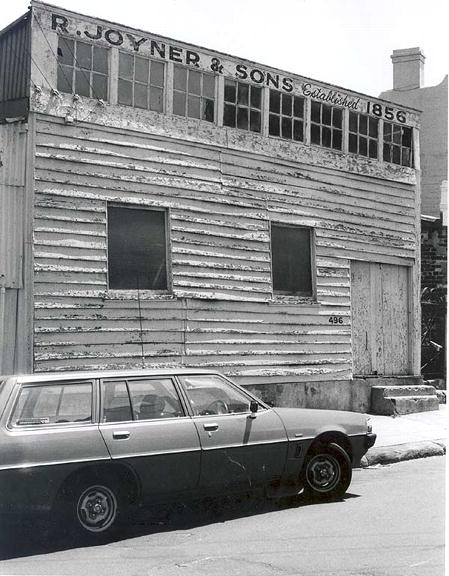 After Robert’s death, aged 65, on 27 April 1890, the firm continued with its local work, such as producing the gates for Cranbrook (ca. 1910), but was also engaged with major works in the city such as Central Railway Station.

Various additions and extensions to the original timber workshop fronting Glenmore Road were made in the late 19th century including the erection of a darkroom for Robert Joyner’s sons, Robert (Wal) and Alfred (Ben) who were interested in photography.

During World War II the Joyners carried out work for defence purposes such as the manufacture ‘dixies’ (food containers) and aiming posts for the Army, and tent pegs and shackles for the Navy. After the war the main items of manufacture were garden tools and ball pein hammers. The number of employees eventually dropped to 4 men. After 1970 Ralph worked on his own until his retirement at 87 years of age.

The Joyner’s workshop closed in 1980 and in 1989 the shop and associated buildings were demolished for residential development.

Robert Joyner established a blacksmith shop in Paddington that would operate continuously in the same location, and run by the one family, for over 100 years. His work can be seen at Rose Bay Convent and St Mark’s Church. I remember going past Joyners’ – used to stand at the door and watch the blacksmith.
What was the work?
Mainly horses and blacksmithying generally ’cause we didn’t have welding then. THEY could weld! They used to heat the two pieces to white heat and hammer them together with the two strikers and they’d be belting – it was really hard work.
– Ted Evans recalls the Joyner’s workshop Growing up in Paddington before the Great War