Peter Sculthorpe is one of Australia’s best-known composers, achieving acclaim both at home and internationally, and his contribution to music composition and education was recognised by the award of an Order of Australia medal in 1990. 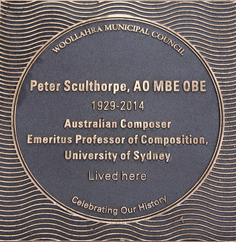 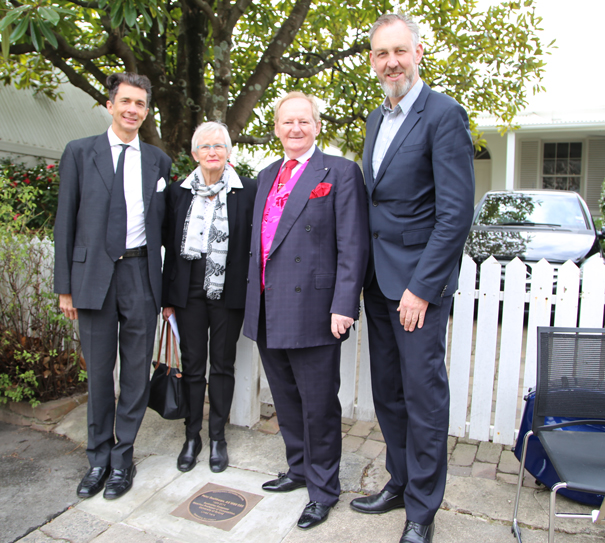 A plaque commemorating the life and work of Peter Sculthorpe was unveiled 8 August 2018 on the footpath outside his former home and studio at 91 Holdsworth Street, Woollahra.  The late composer spent the last decades of his life here.

Read a transcript of the speech given by Emeritus Professor Anne Boyd at the unveiling.

Peter Sculthorpe is one of Australia’s best-known composers, achieving acclaim both at home and internationally, and his contribution to music composition and education was recognised by the award of an Order of Australia medal in 1990.

He was the first Australian composer to develop what many heard as an ‘Australian’ sound and has been described as ‘Australia’s representative composer.

His melodic inspiration was firstly Asian - Indonesia and Japan - and then the music of Indigenous Australians, and his music is strongly associated with the Australian Landscape.

The geographical isolation of Australia from Europe coupled with the concept of landscape entwined with Aboriginal and Torres Strait Island music, plays an important role in shaping Sculthorpe’s musical style. Explaining his use of Aboriginal music, Sculthorpe said that it: ‘always seemed foolish not to take heed of a music that has been shaped by this land over many thousands of years’. Although there are many kinds of landscape in Australia, it is the landscape of the interior that is most strongly associated with Sculthorpe’s music.

(Macarthur, Sally. ‘Sculthorpe shaped composers with a connection to this land. The Conversation 15.08.2014).

Peter Sculthorpe was born on the 29th of April 1929 in Launceston, Tasmania to Joshua Tasman Sculthorpe, a third generation Tasmanian, and Edna Sculthorpe (nee Moorhouse), born in Shipley, Yorkshire.  Edna had moved with her family to Tasmania in 1913, gaining her teaching certificate in 1921.  Edna and ‘Jos’ were married on 27 March 1926 - together they took over the general store business of Edna’s uncle Fred Moorhouse in St Leonards, a nearby village, where Peter and his younger brother Roger grew up.  Jos was a keen sportsman, while Peter’s mother Edna took his education in hand, exposing him to literature, art and music.  By the 1940’s Jos had moved into small time property development, had been elected to the St Leonards Rural council, appointed a Justice of the Peace and honorary magistrate and had become a well-respected member of the community.

At the age of 7 or 8 Peter began piano lessons with local teacher Clara Doodie, who disapproved of his attempts at composition – he carried on composing, initially in secret (under the bedclothes at night), then with his parent’s approval, saying later that his initial attraction was to the ‘calligraphic world’ of music composition.

In 1939, aged 9, Peter was sent to the Launceston Church Grammar School, whose establishment connections were particularly attractive to his father Jos.  Peter made his first public appearance in the Launceston Competitions in 1939.  He also participated with some success in swimming, athletics and gymnastics, gaining the approval of his father.   In 1941 he was sent to a new music teacher, Valeri Myer.

In 1942, the Grammar school awarded Sculthorpe the Magistrates scholarship, apparently on the basis of his literary talents, although he did eventually choose a career in music.

Peter began his tertiary studies in 1946 at the University of Melbourne’s Conservatorium of Music.  In his years as an undergraduate he received a number of awards, and in general appears to have enjoyed his time at University, and although he later wrote that the course was narrow in scope, dealing only with Western European music and he had hoped to learn more about world music. Nevertheless he felt he had learned a good deal and established connections in the world of art, music and literature.  After graduating with a Bachelor of Music, Peter returned to Tasmania, and after an unsuccessful attempt at teaching music,  became a partner in business with his younger brother Roger, whilst continuing to compose.

Regarded as his first significant work, Sculthorpe’s Piano Sonatina was performed at the ISCM (International Society of Contemporary Music) festival in Baden-Baden in 1955 and in 1958, he was awarded a scholarship by the University of Melbourne, enabling him to study at Wadham College, Oxford.  His doctoral studies were terminated in 1961 when his father became ill, and he returned to Launceston.

During the 1960s he became friends with the painter Russell Drysdale (he also had Launceston connections) who reportedly referred to him as ‘Maestro’.  In October 1963, Peter Sculthorpe left Launceston to take up a position as a lecturer in Music at the University of Sydney, having been recommended to Professor Donald Peart, foundation Professor of Music.

Sculthorpe had returned to Australia in 1961 after studying overseas, and this marked the beginning of the rise in his career.   In 1966, he again travelled overseas, this time in receipt of a a Harkness Fellowship to study in the USA, and he later became composer-in-residence at Yale University.

Sculthorpe stated in 1998 that, by being overseas, he ‘gained a perspective on what I had left behind at home’; consequently, many of his works explore aspects of Australian landscape, history and Indigenous culture, such as Irkanda IV (1961), Sun Music I and Sun Music III (1965 & 1967), Port Essington (1977) and Kakadu (1988). Others were influenced by Asian traditions and the music of the Pacific (National Portrait Gallery, 2018).

Widely regarded as Australia’s most significant composer, Peter Sculthorpe passed away in Sydney at the age of 85. He left a remarkable body of some 400 works, the best known including his orchestral pieces Sun Music 1 (1965), Mangrove (1979), Earth Cry (1986) and Kakadu (1988), although he wrote in many genres, including solo instrumental works, string quartets and opera.

As Australia’s best known composer of classical contemporary music, this gives us pause to reflect on the legacy of his music and also upon the role he played as elder statesman of new music in this country.  He perhaps most clearly defined our cultural transformation from colonial outpost to a modern – and magnificently diverse – musical nation, with its own song to sing.

Peter championed Indigenous culture, and collaborated with Dr William Barton, didgeridoo virtuoso, who contributed to Sculthorpe’s last large-scale work, a choral Requiem for mixed chorus, didgeridoo and orchestra (2004).    He also became an advocate for the protection of the environment. Jonathan Paget (Western Australian Academy of Performing Arts) concluded in 2013 that “the Indigenous material adopted (and adapted) in Sculthorpe’s music is often of the most abstract kind”, and that his fascination with these melodies was “a sincere homage to Aboriginal culture”, and contributed to a “rise in public awareness and appreciation”.

The composer wrote in most musical forms, and almost all his works are influenced by the social climate and physical characteristics of Australia. Furthermore, Aboriginal and Torres Strait Island music and the gamelan music of Indonesia were significant influences upon his musical language.

Sculthorpe had a deep love for his country and for its landscape, which he regarded as sacred. Because of this, one of the most constant themes in his output was the protection of Australia's environment, as well as that of the whole planet. His preoccupation with the frailty of the human condition can be found in works such as the choral Requiem (2004) and String Quartet No.16 (2006).

He has bequeathed his Estate to establish the Peter Sculthorpe Chair of Music at the Sydney Conservatorium, University of Sydney.

Peter Sculthorpe  is equally remembered as a teacher and mentor. Notably among his students were Ross Edwards, Barry Conyngham and Anne Boyd (to whom he was engaged at one time) who are all now senior figures in Australian music.  His influence is discussed in depth in Gwyneth Barnes 2011 book “Peter Sculthorpe: an Australian composer’s influence”.

Peter Sculthorpe first joined the University of Sydney's Department of Music, appointed by the late Professor Donald Peart as a young lecturer in music in 1963. He was asked to teach the department's first classes in ethnomusicology thereby stimulating his lifelong interest in the traditional musical cultures of Asia, of Japan and Bali in particular. He offered encouragement and teaching to the young student composers he found in the department, often inflecting traditional teaching towards innovative creative musical activity. These young students grew to become some of Australia's best known and best loved musical voices including composers Ross Edwards, Barry Conyngham and Anne Boyd.

Peter was promoted to a personal chair in composition in 1991 within the Faculty of Arts. He was later to offer warm support to the merging of the Department of Music with the Conservatorium.

Until his retirement in 1999, Sculthorpe's extensive teaching at the University inspired and nurtured many students in the Faculty of Arts. With the introduction of more specialised postgraduate study in music including the nation's first composition doctorate in 1992, he became the supervisor of several now distinguished composers including Matthew Hindson, Professor and Chair of Composition & Music Technology Unit at the Con.

"He was an outstanding composer, a passionate Australian, a delightful and hugely compassionate man, who has contributed significantly to the music foundations of this University across 51 years.

"Professor Sculthorpe is such a huge loss, but at the same time he leaves such a big music legacy," Dr Michael Spence, Vice Chancellor, The University of Sydney.

Peter Sculthorpe was a patron of the Woollahra Philharmonic Orchestra.

On his arrival in Sydney in 1963, Peter Sculthorpe  moved into a furnished apartment at ‘Westminster’ in Edgecliff Road, subsequently purchasing his own property (a semi-detached terrace) on the east side of Queen Street, Woollahra, between Ocean St and Edgecliff Road, taking up residence there in February 1964.

Following the purchase of the property at 91 Holdsworth Street in 1976, he engaged architects Philip Cox and Howard Tanner to ‘romanticise” the house, reflecting his affection for Georgian Architecture from his earlier years in Tasmania. Cox designed a separate studio in a contemporary pavilion opening onto a courtyard at the rear of the property.

Associations between the composer and the house became entwined during the four decades of his residence.  Informed passers-by might remark to their companions “That’s Peter Sculthorpes house”

The house was purchased by designer and music patron Peter Weiss in 2015, reportedly with plans for the studio to become a venue for masterclasses and small intimate performances, and a rehearsal space for students.

During his life, Peter Sculthorpe’s contribution to music composition, teaching and education in Australian and overseas was recognized by numerous prestigious awards – he is said to have regarded the most important as being named as one of Australia’s National Living Treasures in 1997.   His awards included: