Margaret Olley was one of Australia's most loved and significant artists, a generous benefactor and supporter of the arts and emerging artists.

Margaret Hannah Olley was born on 24 June 1923 at Lismore, NSW, the eldest of three children of Joseph and Grace (nee Temperley) Olley. The Olley family were pioneers of the Lismore district and Margaret's family lived on a property at Horseshoe Creek, near Kyogle. In 1925 the family moved to Tully in far north Queensland where they established a sugar cane farm. In about 1931 the family moved back to northern NSW, purchasing a sugar cane farm at Tygalgah, near Murwillumbah. Margaret attended the local primary school in Murwillumbah.

In 1935 the family were on the move again, first to Brisbane before returning to Tully. However Margaret remained in Brisbane to attend Somerville House, a girl's boarding school. Her art teacher recognised Margaret's artistic talent and persuaded her parents to send Margaret to art school. Margaret attended Brisbane Central Technical College in 1941, and in 1943 she moved to Sydney and enrolled at East Sydney Technical College to study art. While studying she supported herself by painting theatre sets. She participated in her first group exhibitions at East Sydney Technical College in 1943 then with the Under 30 Group and Royal Queensland Art Society in 1944. She graduated from College with first class honours in 1945.

Career, travel and life in Paddington

Margaret, living in a rooftop flat at McMahons Point, was involved in the post-war Sydney art scene, which included artists such as Jean Bellette, William Dobell, Russell Drysdale, Donald Friend, Sidney Nolan, Justin O'Brien and David Strachan. She won her first art prize, the Mosman Prize, for her painting New England Landscape in 1947.

In 1948 Margaret held her first solo exhibition at the Macquarie Galleries with one of her works purchased by the Art Gallery of NSW. She stayed with Donald Friend at Hill End where she made a number of paintings, and William Dobell painted his famous portrait of her which won the Archibald Prize.

The following year Margaret fled the glare of publicity created by the Dobell portrait, travelling first to England and then on to Europe. While in France she attended classes at La Grande Chaumiere, went on painting trips and enjoyed gatherings with friends. Following the death of her father in 1952 she returned to Brisbane where she designed theatre sets and was commissioned by the Queensland Art Gallery to paint a mural of the Place de la Concorde for a French art exhibition. After completing a mural with Donald Friend, she and Donald travelled together to North Queensland. Margaret then went on to New Guinea before returning to Brisbane.

Margaret's dependence on alcohol threatened to affect her work and after bringing her drinking to an end in 1959 she found a new enthusiasm for her painting which then "blossomed from the early 1960s" (Pearce, 1996, p.19). During the 1960s her output was vast and she enjoyed great success. She held numerous exhibitions and entered art competitions where she won many prizes including the Helena Rubenstein Portrait Prize in 1962, the Redcliff Art Prize in 1962 and 1963, the Bendigo Art Prize and Finney's Centenary Art Prize in 1963, and the Johnsonian Club Art Prize in 1964. She went to Newcastle in 1964 and was captivated with the city and its port, making a number of paintings and sketches while she was there.

Margaret decided to invest in real estate and in 1964 she purchased her first house at 70 Paddington Street, Paddington (Margaret sold this house in 1971). In late 1964 Margaret found another house in Paddington, this time at 48 Duxford Street which had an old hat factory building at the back of the terrace and which Margaret thought "would be a better place for working than my other house in Paddington Street" (Stewart, p.378). Margaret kept a couple of rooms for her own use and rented out the rest of the house. Later in the 1960s she made further investments in real estate in Newcastle.

Margaret was inspired and influenced by the works of such European artists as Vuillard, Bonnard, Vermeer, Cezanne and Morandi. During her career she established and maintained a large network of friendships in the art world. She travelled extensively including trips to New Guinea, south-east Asia, Bali (while visiting Donald Friend), America, Europe and England. Her travels were always an influence on her work. While in Australia she made constant trips between Sydney, Newcastle and Brisbane.

The decade of the 1970s saw Margaret continue with her pattern of prolific output, numerous exhibitions and frequent travelling. At the end of 1970 her great friend, artist David Strachan died and the following year she travelled to France where she took up a studio in Paris. On her return to Sydney she found her flat in Duxford Street too crowded and was instead able to use Strachan's empty Paddington Street house as a studio. The works she produced here were described by Barry Pearce as "the outstanding achievement of this [1970-1979] decade". In the early years of the 1970s Sam Hughes, who Margaret had met in 1945, re-entered her life and moved in to her Duxford Street house.

In 1975 Olley formed an association with art dealer Philip Bacon and continued to exhibit her work with him for the rest of her life.

Margaret experienced a period of great sadness when both her mother Grace, and love of her life, Sam, died in 1982. Missing Sam's presence in her Duxford Street house, Olley decided to find another place in Paddington in which to live and in 1984 she purchased a house in Gurner Street. However, by 1988 due to increasing difficulty walking and negotiating the staircase in her new house, Margaret moved back to her Duxford Street premises. Speaking of Duxford Street in 2011 Margaret said: "I painted so many still lifes there, as well as the interior itself, over and over. Who was it said there are only a few stories, and good writing brings a freshness to the few timeless subjects? The yellow room remains even today an essential part of my life and work. It was my sanctuary. It had an ideal quality of intimacy" (Pearce,2012, p.11). 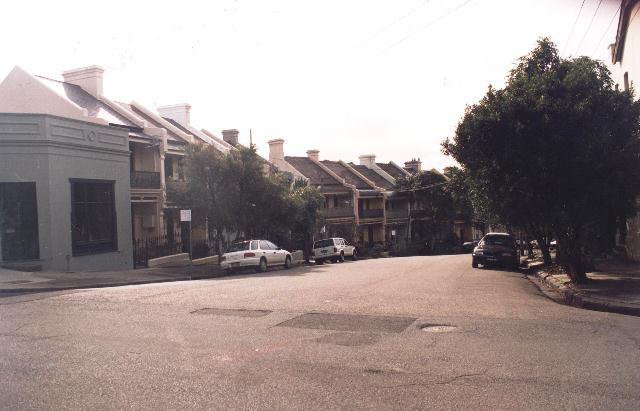 Looking down Duxford Street towards Margaret Olley’s house in the 1990s.

During the 1990s Margaret began to receive more public acclaim and recognition, elevating her to almost celebrity status. The first retrospective of her work which accompanied the launch of the book Margaret Olley by Christine France was held at the S.H. Ervin Gallery, Sydney in 1990. In 1997 her work was the subject of a major retrospective organised by the Art Gallery of New South Wales.

In 2005 Margaret travelled to London to attend an exhibition of her paintings, described by Barry Pearce as being of "exceptional quality", which were mounted in conjunction with works by Bonnard and Vuillard (Pearce, 2012, p.83). An exhibition of her drawings, watercolours and monotypes 'Margaret Olley: Life's journeys' was prepared in 2009 by the University of Queensland Art Museum touring Sydney and Newcastle.

In April 2011 artist Ben Quilty won the Archibald Prize with his portrait of Margaret.

Despite declining health Margaret continued painting right up to the end of her life and had finished a series of paintings for an upcoming exhibition to be held at Philip Bacon Galleries. Before she could attend the launch Margaret died at her home in Duxford Street on 26 July 2011, aged 88. A State memorial service was held for Margaret at the Art Gallery of New South Wales.

Margaret received numerous honours and awards during the later years of her life.
She received three Australian Honours:

She was declared an Australian National Treasure and a Life Governor of the Art Gallery of New South Wales in 1997. She received the Achievers Award from the Federal Government in 1999. In 2007 she was appointed a Fellow of the National Art School.

From the late 1980s Margaret began donating works of art to the Art Gallery of New South Wales and in 1990 she established the Margaret Hannah Olley Art Trust to acquire paintings for public collections.  Margaret became one of Australia's most generous benefactors. In recognition of her bequests the NSW Art Gallery named The Margaret Olley Twentieth Century European Galleries in 2001. In his introduction to Margaret in Barry Pearce's 2012 publication Margaret Olley, Edmund Capon noted that while Margaret was "one of the most unforgettable, indelible, colourful, independent and spirited people we could ever meet we should never overlook her passionate belief and commitment to the arts".

Before her death Margaret expressed the wish to have part of her home and collections recreated where she spent her childhood. She bequeathed 1 million dollars to the Tweed Regional Gallery towards the creation of her dream. The Margaret Olley Art Centre was officially opened on 15 March 2014. The Centre 'celebrates the career, life and legacy of its namesake, Margaret Olley – Australia's most celebrated painter of still life and interiors'. Fundamental to the Centre is the recreation of three rooms of Olley's home studio at 48 Duxford Street – the hat factory, yellow room and green kitchen. Original architectural features including windows and doors were relocated from her home and the interiors filled with over 20,000 items that Olley collected as subject matter for her paintings.

One of Australia's most loved and prolific artists, Margaret Olley painted landscapes, particularly in her early years, but primarily she painted works of still life and interiors. Edmund Capon wrote that "her pictures distil the commonplace world around us into certainty, beauty and immortality" (Pearce, 2012, pp.9-10). She has been described as an icon and a national treasure. Writing of Olley in 1996, Barry Pearce noted "In addressing the present with her interpretation of a great tradition of the genre she practises she may be our most important artist to carry its legacy into the future" (p.21). The Australian Women's Register notes that "Margaret Olley is known as one of Australia's most prized interior and still life painters".