View all plaques in Point Piper

Captain John Piper was a military officer, public servant and popular social figure of the early years of the colony. He is closely associated with the history of Point Piper and surrounding area.

Born 20 April 1773 at Maybole, Ayrshire, Scotland, John Piper was the son of Hugh Piper, a doctor of modest means. In 1791 with the help of his uncle, Piper secured a commission as ensign in the newly formed New South Wales Corps. The Corps was established as a military regiment in 1789 to replace the British Marines who had accompanied the First Fleet to Australia in 1788.

John Piper set sail for Sydney on the ‘Pitt’, arriving in the colony in February 1792. The following year Piper was granted his request to be sent to the penal settlement on Norfolk Island. He was promoted lieutenant in May 1795 and returned to the mainland. In 1800 Piper was given the local rank of captain and stationed at Parramatta.

Since its formation the NSW Corps had steadily gained in wealth and power leading to conflict with the early governors of the colony. Piper, a close friend of John Macarthur who was one of the key officers in the struggle between the Corps and governors, was himself arrested after supporting Macarthur in a duel in 1801. After apologising for his actions Piper was acquitted at his court martial in 1802.

Piper returned to Norfolk Island in 1804 and later that year he was appointed commandant when the Lieutenant-Governor Joseph Foveaux left on sick leave. He was promoted to the full rank of captain in 1806. During his period of responsibility on Norfolk Island, Piper oversaw the removal of most of the settlement and their relocation to Tasmania, and he was generally admired and respected for his organisational abilities and the humane manner in which he carried out his duties.

During the years Piper was stationed on Norfolk Island the struggle between the Corps and Governors King and Bligh continued, culminating in the so-called ‘Rum Rebellion’ of 1808. Governor Bligh was deposed by the NSW Corps but their actions led to the reformation of the Corps into the 102nd Regiment of Foot and their recall to England in 1810.  Piper returned to Sydney from Norfolk Island in 1810 and the following year he too left for England. He was accompanied by his companion,Mary Ann Shears (the daughter of a convict who Piper appears to have met while on Norfolk Island), their 2 boys as well as his daughter from an earlier relationship.

While in England Piper resigned his commission and sought employment as a civilian back in the colony. In 1813 he was appointed Naval Officer, in which role he was to be responsible for collecting customs duties, excise on spirits and harbour dues, control of lighthouses as well as various other duties. Piper and his family arrived back in Sydney in February 1814 and two years later on 10 February 1816 he married Mary Ann by special licence.

Piper was appointed a magistrate by Governor Macquarie in 1819. He was chairman of directors of the Bank of New South Wales in 1825 and sat on numerous committees including the Australian Agricultural Company, and was president of the Scots Church committee. Piper was an enthusiastic participant in social and sporting events, and was an important breeder of early blood horses in New South Wales.

In 1813 John Piper was recommended to Governor Macquarie to receive a grant of land.  Piper proceeded to lay the foundation stone for his new house at Point Piper, then known as Eliza Point, in 1816, although the promised grant of 190 acres was not formalised until 10 February 1820. The foundation stone was laid in front of a large gathering and performed by a newly established society of military masons.On Saturday last a large party of Officers and other Gentlemen, accompanied by a number of Ladies, proceeded by water to Elizabeth Point, near to South Head, at the invitation of Captain Piper, who gave an elegant fete champêtre on the occasion of laying the foundation of his intended   building on that beautiful and commanding point; to which the Gentlemen proceeded in Masonic order.
— Sydney Gazette 9 Nov 1816, p.2

The classically designed villa in its picturesque setting was unrivalled in architectural style at the time. The architect is unknown but it has been argued that it may have been designed by Henry Kitchen. The house was situated in present day terms in the block created by Longworth Avenue and Wunulla Road. Captain Piper, Mary Ann and their children moved into Henrietta Villa, reported to have cost £10,000 to build, in mid-1822.We have the unsatisfactory duty to report the removal of a family from town, which will be experienced in many classes of our colonial community, and by none more sensibly than the poorer orders. Captain PIPER, with his family, has withdrawn to the sweet and enviable retirement of Point Piper, where this universally respected Gentleman intends residing for the future. The mansion is elegantly and commodiously fitted up,and only seemed to require the presence of its munificent owner to render it irresistibly enchanting.
— Sydney Gazette 3 May 1822, p.2

Piper led an extravagant lifestyle at Point Piper. He entertained lavishly at his new villa which became the centre of the Sydney social scene, hosting grand balls in the domed ballroom as well as dinner parties, water parties and picnics in the grounds. A row of brass cannons stood on the lawn and saluted Piper’s friends as they sailed in and out of the harbour. His gardens were laid out with groves of trees brought over from England that included ash, larch, spruce and Scotch fir.

Artist Joseph Lycett was so impressed with the villa he described it in his Views in Australia published in 1824, as ‘the most superb residence in the colony’. He was equally charmed with the gardens:On a very high hill a little to the right, at the back of the Villa, a most excellent Garden has been formed, which supplies abundance of the choicest fruit, consisting of Oranges, Peaches, Apricots, Nectarines and every other species which the climate produces. The grounds in front of the building are planted with numerous Orange- trees, and laid out in a very pleasing and tasteful manner.

In order to reach his new house by carriage, Piper needed to build a road ‘at a very considerable expense through the Bush’ (Lycett). The route ran from the established South Head Road (Oxford Street) through Woollahra and Paddington along Jersey Road (referred to as the Point Piper Road until 1900 when it was renamed in honour of the Earl of Jersey), then through Double Bay along Ocean Avenue, William Street and New South Head Road to Point Piper.

One of John Piper’s favourite past-times was horse racing,and when racing at Hyde Park ceased in about 1825, Piper made sure that he and his friends would not go without by building his own race track not far from his home. Race-goers viewed the races taking place on the flats of Rose Bay from marquees erected on the slopes of Bellevue Hill.

However the heady days at Point Piper were not to last, when, in 1826 questions raised over Piper’s conduct in the carrying out of his public duties led to his financial downfall. 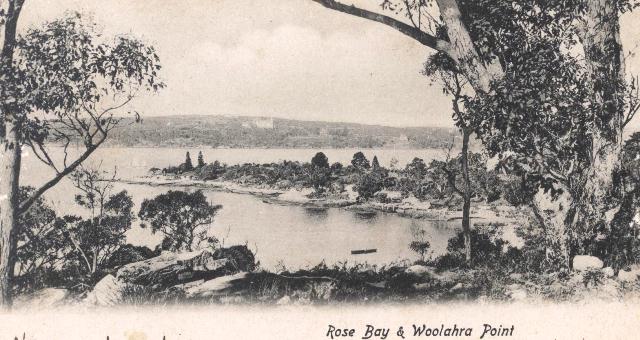 As Piper’s income increased in his position as Naval Officer he continued to acquire land through both grant and purchase. As an officer in the NSW Corps, Piper had been entitled to a grant of land and in 1794 he received his first grant of 100 acres at Petersham Hill.  By 1826 his holdings included his land at Point Piper, 1190 acres at Woollahra (Point Piper Estate), 475 acres at Vaucluse (Vaucluse Estate), and further property in Neutral Bay, Botany Bay,Petersham, Bathurst, Tasmania and city land in George Street.

Despite this Piper began experiencing financial difficulties and in 1826 he raised a mortgage of £20,000. During 1826-27 enquiries ordered by Governor Darling into the affairs of the Bank of New South Wales and Piper’s financial management as Naval Officer led to Piper resigning his position with the bank and being suspended from his official position. The findings suggested mismanagement of affairs rather than any dishonesty on Piper’s part.

Faced with the disgrace Piper decided on a drastic course of action. He made his will and invited his closest friends to dinner at Henrietta Villa. After dinner Piper excused himself and ordered his crew to row him outside the Heads. While the crew (who doubled as Piper’s orchestra) played, Piper threw himself overboard whereupon he was rescued and returned to his villa by the crew.

Piper and his family retired from Point Piper to their country property Alloway Bank at Bathurst. However despite involving himself in agricultural pursuits and becoming an important figure in the town, by 1832 he was selling the remainder of his land in Sydney and the drought of 1838 forced him to mortgage the Bathurst property. The depression that followed saw Piper selling the property for only a few hundred pounds.Friends helped re-establish Piper and his family on a 500 acre property, Westbourne, beside the Macquarie River,while ensuring that it was secured for Mary Ann and the children.

John Piper was a personable and much liked figure in early Sydney society. As a member of the NSW Corps and as a public servant he played an important role in the civil and commercial activities of the time. He was generous to all and a charming and affable host.

John Piper has left memories and real reminders of his life at Henrietta Villa as the first grantee of land in the suburb bearing his name and in the road he laid out to his home,known for many years as the Point Piper Road. Images and stories of John Piper, Henrietta Villa and the activities that took place there have contributed to the history of the district since Europeans arrived.