William John Dumaresq was a well-known colonist who lived for 26 years at Tivoli, Rose Bay.  Dumaresq’s British military training and experience equipped him with the civil engineering knowledge he brought to colonial appointments in New South Wales. William Dumaresq was a member of the first Parliament of the colony.

794 New South Head Road, Rose Bay - The plaque is installed in the footpath just outside the entrance gates of Kambala School, Rose Bay. 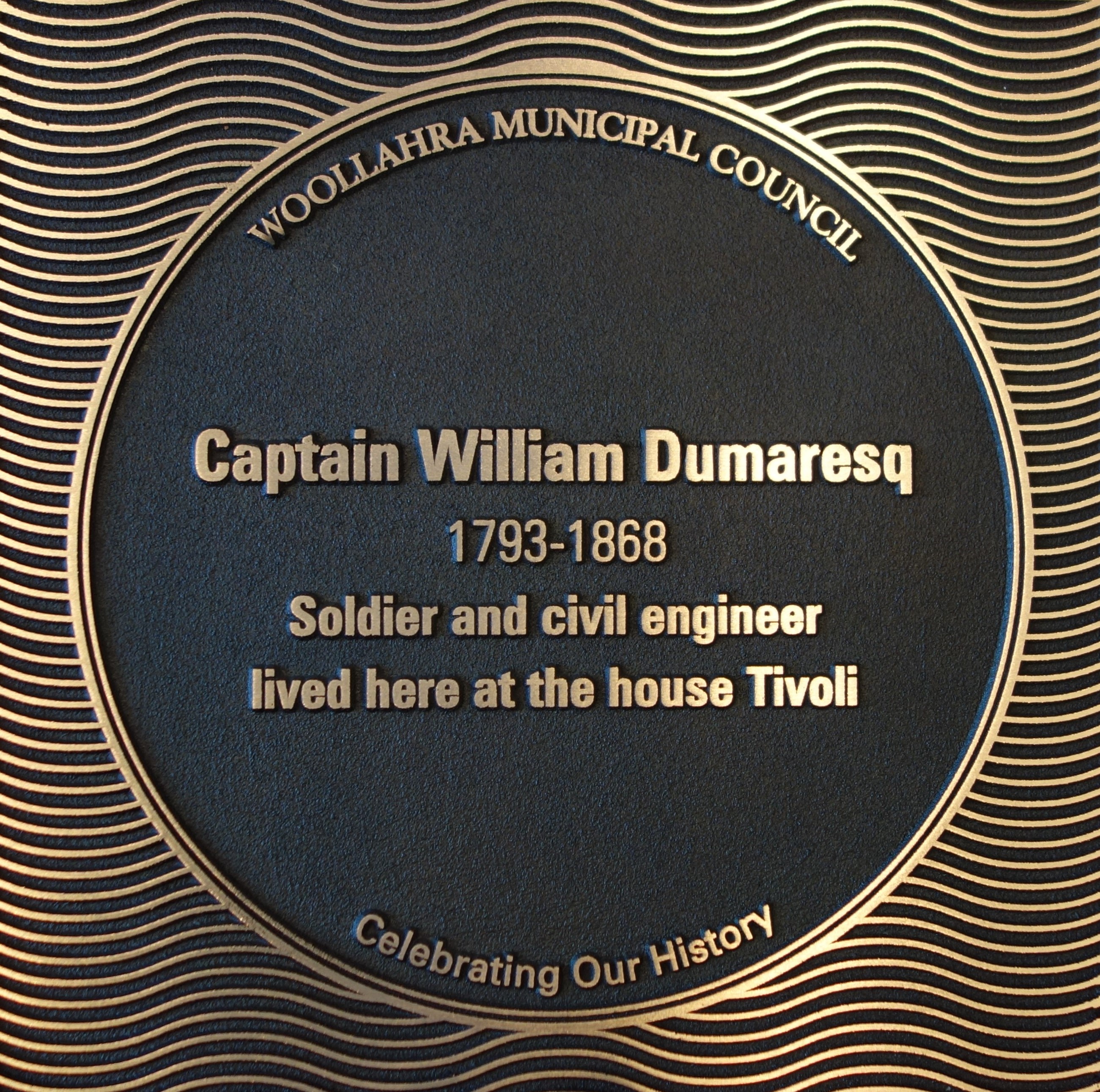 The plaque commemorating William Dumaresq was unveiled 29 October 2021, on the footpath near the house Tivoli, 794 New South Head Rd, Rose Bay, NSW, his residence for 26 years.

William John Dumaresq (1793-1868) was the son of Colonel John Dumaresq of Bushel Hall, Shropshire, England and Anne, née Jones. There was a strong military legacy in the Dumaresq family, which encompassed the service of William's father, brother, son and grandson as well as his own. William’s military training began at the Royal Military College, Great Marlow, Buckinghamshire, England and he joined the army in 1809, serving in the Peninsular War from 1811 to the end of that conflict in 1814, principally in the Quarter-Master General's department in reconnaissance and in charge of bridges. In 1815 he was deployed with the British Army in Belgium, where he was again engaged in reconnaissance and in the construction of rope bridges at Antwerp for the forward movement of troops. Dumaresq attained the rank of captain in the Royal Staff Corps.1 2

While serving with the British Army in Paris, Dumaresq supervised the return to Venice of four bronze horses from St Mark’s which Napoleon had removed to Paris for the Arc de Triomphe du Carrousel.3 In 1819 he travelled with the Royal Staff Corps to Canada where he is said to have been engaged in the construction of the Ottawa canal.

Dumaresq's strong military foundation and family background enabled him to move amongst the colonial elite upon his arrival in Sydney. His sister, Eliza, had married Ralph Darling who became the Governor of New South Wales (1825-1831).  This connection was the impetus for the move to Australia of Eliza's siblings Edward (1802-1906), who settled in Van Diemen’s Lan, and Henry (1792-1838) and William who both came to Sydney.

On 14 October 1830 William Dumaresq and Christiana Susan McLeay were married at St James' Church, Sydney. Christiana was the second daughter of Alexander McLeay, the colonial secretary.

William and Christiana had two sons and two daughters - the eldest son, William Alexander Dumaresq gained an MA at Cambridge, England and qualified as a Barrister of the Inner Temple, but later returned to Australia to live. Their second son Alexander Macleay Dumaresq joined the army in 1854 and served  'with distinction', attaining the rank of Captain in the 63rd Regiment, before his death in November 1866. Eliza Henrietta, their youngest daughter, died in 1865.

Christiana, William's wife, died at Tivoli, Rose Bay, on 2 May 1868. After her death William moved to Queensland to live with his eldest daughter, Susan Frances Sophia and son-in-law the Honourable Louis Hope, Captain Coldstream Guards, and son of John, the fourth Earl of Hopetoun.5 Just six months later  William Dumaresq died, on the 9th of  November, 1868, at Cleveland, Moreton Bay.  His funeral was held at St Marks Church, Darling Point on 14 November 1868, and he was buried at Camperdown Cemetery.6

William held various positions in the colony, appointments conferred by his brother-in-law the Lieutenant-General Ralph Darling. The two were also reported to socialise frequently.7

William’s government appointments included civil engineer, inspector of roads and bridges8, deputy surveyor general, and acting colonial treasurer, although, amidst controversy and accusations of nepotism fanned by a relentless media unfavourable to Governor Darling, the appointments were never confirmed by the British government. One author in the Monitor wrote:

(oh ! what a mighty fine thing to be brother in-law, to a magnificent three-tailed bashaw !)

At the annual commemoration of Sydney University in 1859, William Dumaresq is recorded as one of the “fellows” who came to the newly completed hal, splendid with ancient tapestries.11

William was 'accorded less publicity, but more enduring praise, for his services on the Land Board, on the committee of the Female Factory and as the sponsor of John Busby's water supply scheme' to provide water for the city of Sydney.12 In one report on the matter, Busby was said to have proposed a scheme  to pump water from the Waterloo swamp to Hyde Park using a steam engine, water wheel, or a  continuously operating treadmill worked by convicts, the latter option preferred by the Colonial Secretary as a deterrent to criminals.  Captain Dumaresq, as Government Civil Engineer, had strongly opposed the Colonial Office plan, and Busby subsequently designed a new scheme. Completed in 1837 after almost ten years, 'Busby's bore' was the main water supply to Sydney until the c185013.

Captain William Dumaresq retired from public life in early 1829 and became a pastoralist, receiving a grant of 2,560 acres near Scone14. This was extended by his wife's grant and other purchases to eventually forming a holding of some 13,000 acres (5,000 hectares) where he raised cattle. The estate was known as St Aubins, likely to be a reference to the town and port of St Aubin on Jersey - the largest of the Channel Islands and his father's birthplace. Dumaresq also leased 65,000 acres at Tilbuster, near Armidale. William Dumaresq was 'largely responsible for the erection in Scone of St Luke's Church of England, was a foundation member of church and hospital committees, gave the land on which the first Scone Hospital was built and was a member of the bench of magistrates and of the Scone District Council.'15

...he was honourable in all his transactions, and as a magistrate, just in his decisions...

After 1840 William lived mainly at his house Tivoli, in Rose Bay, but continued his association with the Scone district.

Parliamentary Career and other appointments

Captain William Dumaresq sat in the colony’s first representative legislative council and was a member for almost a decade17:

"In May, 1866, Dumaresq was again offered a seat in the Legislative Council, but declined to accept it on account of his advanced age.”19

He was a director of the Sydney Infirmary and Dispensary from its first establishment in 1845 till 1848; he was then appointed one of the vice-presidents, an office which he continued to hold until he resigned in July [1868]. On that occasion the following resolution was unanimously passed by the Board of Directors.

"It was resolved that, on receiving the letter from Captain Dumaresq, enclosing a donation of £100 to the permanent endowment fund, this Board desires that a letter be prepared by the hon. secretaries, expressing its warm appreciation of the great and long-continued services of Captain Dumaresq, and acknowledging with gratitude his liberal gift to the endowment fund."

In 1840 a portion of Breakwell's 'Tivoli' grant was purchased by William Dumaresq, from the merchant Peter Haydon,21 for £4000, and although there were some buildings and stables on the site, it seems likely that the original stone cottage was built by Dumaresq c1841.  The property occupied about 18 acres, approached by a carriageway from New South Head Road. The house was known as Tivoli, from the original estate name. The present-day address is 794 New South Head Road. 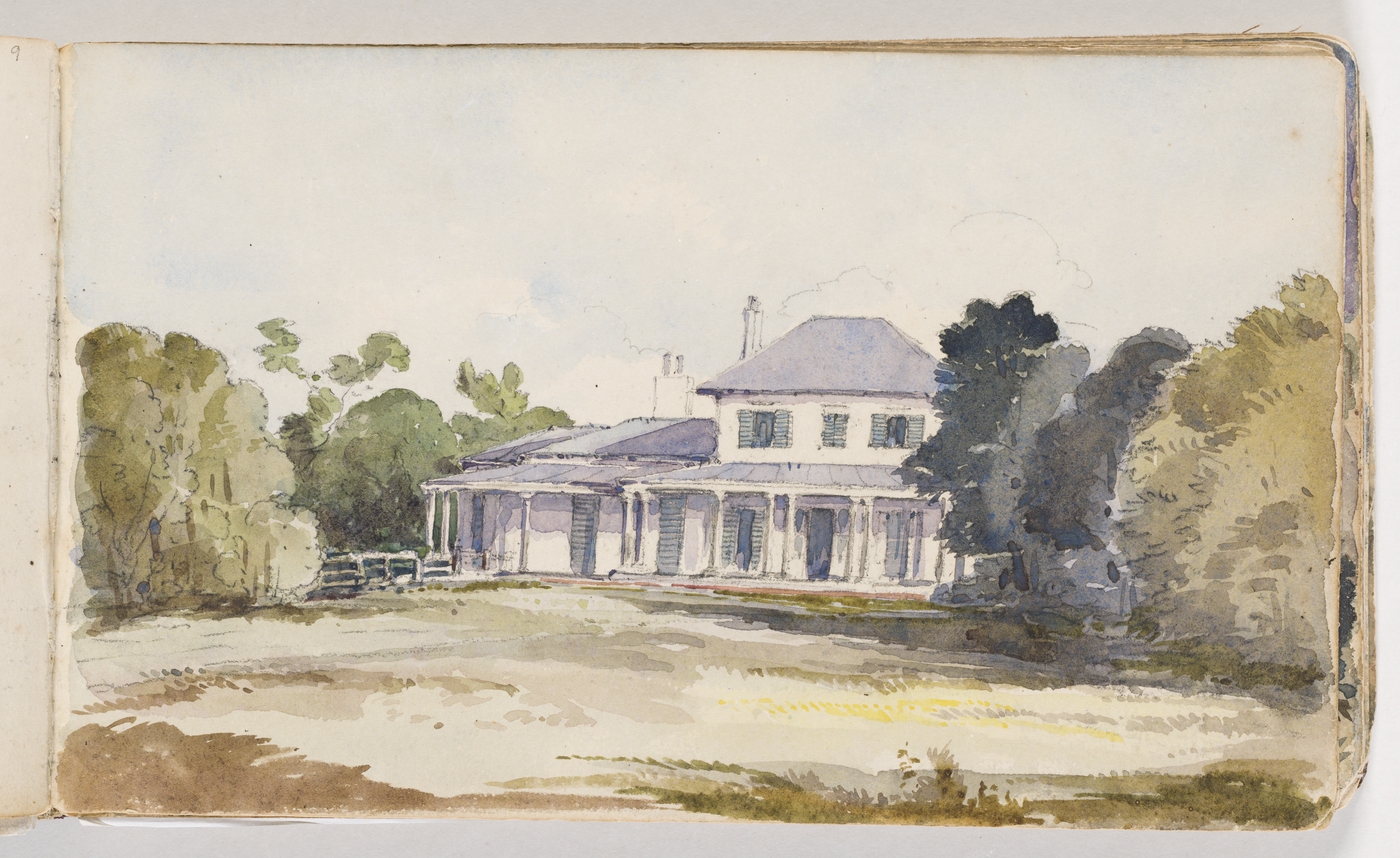 'Tivoli'  from 'Sketchbook of John Andrew Bonar Who Went to Australia in 1857'. Mitchell Library, State Library of NSW22

In January 1860 the property was advertised for lease, with applications to be made to the proprietor William Dumaresq, and available for occupancy on or about the 15th March 1860.

Records suggest that the Dumaresq family were in England around this time - the 1861 census lists William Dumaresq 'late of the army', Christiana (his wife), sons Wm Alex 'BA of Cambridge', Alex M 'Captn in the Army 63 Reg' and daughter Eliza Henrietta, residing in Old Town Street, Plymouth, Devon.25

In October 1862, tenders were requested by Thomas Rowe, Architect, for additions and alterations to Tivoli House, Rose Bay, including the erection of a servants' Hall and 'sundry alterations'.

Tivoli House was a focal point of Dumaresq family life over two generations  - the Hon. Susan Hope, William's elder daughter, gave birth to two sons and a daughter at Tivoli, in 1864, 1866 and 1868 respectively27 . When William John Dumaresq died in 1868, the property passed to his son, William Alexander Dumaresq, whose son John Saumarez Dumaresq - Captain Dumaresq's grandson - was born at Tivoli on 26 October 1873.  Raised in England from the age of two, John Saumarez Dumaresq continued the family tradition of military service and entered the Royal Navy as a cadet in 1886, rising through the ranks on merit. In March 1919 he was appointed commodore commanding the Australian Fleet and in June 1921 he was promoted to Rear Admiral, becoming the first Australian-born officer to hold that rank and to command the Royal Australian Navy.28

After William Alexander Dumaresq's death on 28 May 188029 Tivoli House and grounds were put up for sale.  Richardson and Wrench, the selling agents, advertised in the newspaper prior to the auction on Friday 29th April 1881, describing the house and grounds as

The property had a 'never-failing supply of pure water from a constantly running spring' which was supplied to the residence and outbuildings by 'gravitation'. The grounds were described in very favourable terms - the residence was 'approached by a magnificent avenue and carriage drive (one of the most beautiful in the colony)' and 'exceedingly beautiful gardens'  with 'croquet lawn, masses of evergreens and clumps of native and imported timber through which a splendid panoramic vista of harbour scenery is obtained'. 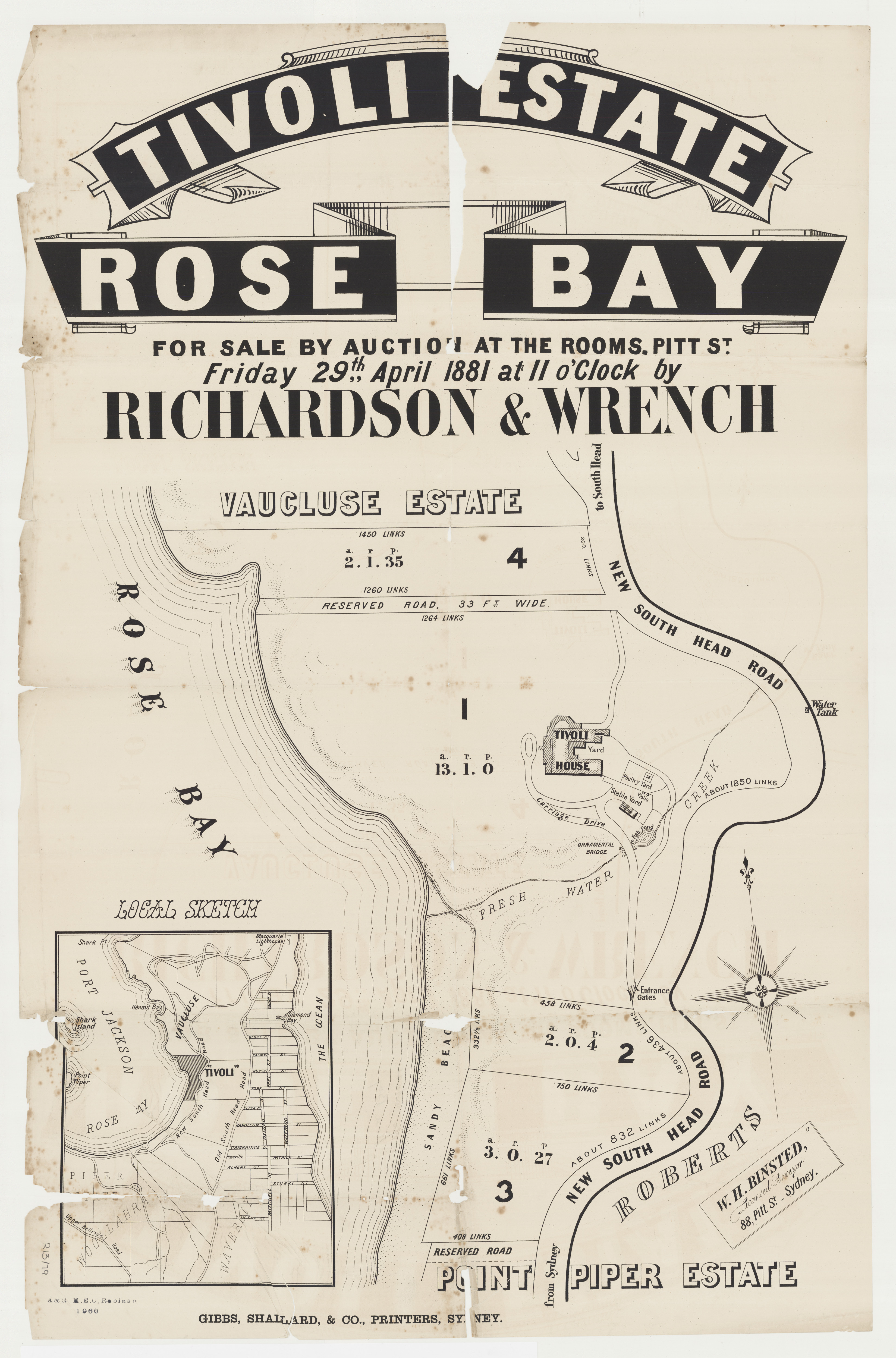 In  May 1881 Richardson and Wrench reported the sale of the Tivoli Estate for £9000 to Morrice Alexander Black, an actuary with the AMP Society. Black commissioned the well-known architect John Horbury Hunt to design substantial additions to the house in the form of additional storeys, largely establishing the current configuration of the house, although the ground floor plan was retained.31 Black died in 1890 and the house, by then with reduced acreage, was sold to Joseph Pearce, whose family occupied it until 1898. In 1899 Mrs H C Fraser lived at Tivoli.32 Between 1900-13 James R Love was the occupant and last private owner of Tivoli House. Since 1913, the house has been part of the Kambala Girl’s School, and today is a boarding house for pupils.33

The origin of the name Tivoli remains obscure - it may have been named by Breakwell, an Irishman, after Tivoli near Cork, in Ireland. An alternate story is that the property was named after the well-known waterfall at Tivoli, Italy (north-east of Rome), and the resemblance to the stream and little waterfalls which flowed through the land on the Breakwell grant into Rose Bay.34

Despite the early controversy that enveloped with William and his brother Henry, William's obituary recorded the  'valuable military and civil service rendered to his country' and concluded

“There are few men of whom it can be said with more truth, that he was ' sans peur et sans reproche.'” [“Without fear & without reproach”]

Morrice Black subdivided an area of reclaimed land and a roadway from the Tivoli estate in 1888-1889. In October 1938 the reclaimed land was dedicated for public recreation and in 1960 Council resumed the road for ‘the provision of rounds for public health, recreation and convenience and the preservation of a place of natural scenery.36 This area of land is known as Dumaresq Reserve, named for Captain William Dumaresq, and is approached by Dumaresq Road off New south Head Road, Rose Bay

The Dumaresq brothers are also remembered in the New England region of NSW.

36 Council resolved this on 23 November 1959 and the common seal of Council was affixed on 9 Aug 1960 to the reserved road area.