In May 1892, the aldermen of Paddington Council showed their progressive thinking in opening a library within the newly-built Paddington Town Hall. A Library has operated almost continuously from this base for the last 130 years, a milestone achieved on 11 May 2022.

Launched as part of the National Trust's Heritage Festival 2022, themed Curiosity, this suite of web pages celebrates and explores the history of the Town Hall and Paddington Library - for 130 years a much loved destination for the curious minds of Paddington residents and visitors, young and old.

Paddington's 'new' Town Hall was opened on 3 October 1891 by Governor of NSW Lord Jersey. On 11 May 1892, Paddington Library was opened in the northern end of the newly built Town Hall. View a gallery of images and find out more about the history of the Town Hall and Library. 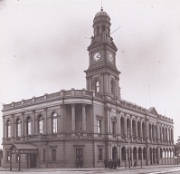 As with every Library service, staff were integral to the Paddington Library and what it offered to its community -  selecting book stock to inform and entertain and providing a helpful presence in the reading room. Read more.

The City of Sydney Library opened a Paddington Branch in 1952 following the amalgamation of Paddington Council with the City.  Also known as The Frank Green Library, named after a former Alderman, the Library was situated at the rear of the Town Hall facing Oatley Road. Find out more about the design of the library and view a gallery of images from the City of Sydney archives.

Bohemian Paddington and beyond....

During the 1960s, Paddington became home to artists and a wave of new residents were attracted to Paddington's terrace houses and laneways.  It also became the focal point for the emerging 'counterculture' which started in the 1960s. Paddington Library remains an integral part of a vibrant and diverse community. Read more.