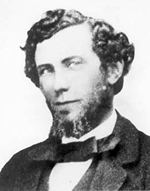 Samuel Herbert Thompson, the son of Joseph and Mary Thompson (nee Brown), was born in Shadwell, England on 28 December 1821.  The Thompson family came to Sydney via Hobart from London on the ship the James Harris, landing in Port Jackson on 1 May 1834.  The passenger lists recorded that Samuel’s father, Joseph, and his uncle, Samuel, were ‘linen drapers’.

The family settled in Sydney, by 1850 Joseph was listed in the Sydney Directory as resident of North Terrace, Macquarie Street.

Samuel Thompson married Martha Emma Foss, daughter of Ambrose and Louisa Foss (nee Freemantle), on 21 January 1852 at the Congregational Church, Pitt Street, Sydney.  Martha was born in Sydney on 30 April 1833.  Her father, Ambrose, had a business in the city (Pitt St) as a wholesale and retail chemist and druggist.

Samuel’s father Joseph set up a business in King Street as a linen draper, and in 1838 he moved the business to Pitt Street.  By 1839 he was operating as Joseph Thompson & Son in partnership with his son Joseph.  When Joseph senior retired in 1848 the partnership was dissolved but the business continued to operate under Joseph Thompson & Son.  Samuel was also involved in the business and in 1853 a new firm J.W. and S. Thompson was formed operating as ‘importers of, and wholesale dealers in, Manchester, Scotch, and fancy goods’.  The retail arm of the drapery business closed in January 1853 and Joseph’s original shop in Pitt Street was sold.

On the retirement of Joseph junior, the partnership between Joseph and Samuel as warehousemen was dissolved, and from 1 January 1864 the firm was continued by Samuel under the name S. Thompson & Co.

By the mid 1870s Samuel had moved from his position as warehouseman and wholesale draper in Pitt Street to that of stock broker with rooms in George Street.

After 1854 land in Woollahra was offered as 99-year leases by the trustees of the Point Piper Estate.  Samuel Thompson secured a lease of over 2 acres on the eastern side of Edgecliff Road, opposite Albert Street.  Within a few years a stone house with slate roof, known as Maravi, had been built on the site. The house, overlooking Double Bay, had a circular drive with stables, a coach house and terraced gardens.

Samuel’s father, Joseph died at the house on 11 July 1858 aged 80.  Samuel continued to live there with his family until 1883. His ‘choice and valuable household furniture’ was offered for sale by auction at the house in September. He then moved to Homebush to the house Rothay (or Rothsay) that he built at 72-76 Abbortsford Road, remaining in that district until his death.

The Thompson’s property at Woollahra was re-subdivided in 1923 and the house, by then known as Castlefield, was converted to residential flats.

Samuel Thompson was officially nominated as candidate for councillor of Woollahra Council by John Valentine Gorman, seconded by W. Davis on 21 May 1860.  He received 44 of the votes cast on 28 May.  Thompson was unanimously elected Council’s second chairman in 1861. On his retirement as chairman he was thanked by the councillors for the ‘very impartial and uniformly courteous manner in which he had discharged the various duties connected with the office of chairman during the past twelve months’.

As a councillor, Thompson served on the finance, assessment, improvement, lighting and water committees.  He assisted John Gorman with arranging the lease for the first council chambers building and in acquiring suitable furnishings and fittings.  In 1862 he proposed that a committee be formed to ‘secure a better supply of water for the residents of Upper Paddington’.  He negotiated a settlement with the trustees of the Point Piper Estate concerning assessments for unoccupied land.

In the elections held in February 1867 Thompson was not re-elected; however he was re-elected the following year.  His seat was declared vacant at a council meeting held on 13 June 1871 and at the ensuing election held on 7 July he was replaced by William Teale.

Martha Thompson died at Homebush on 21 September 1900.  Ten years later on 22 February 1910 Samuel Thompson died at his home in Burwood that he named Maravi, aged 88. Samuel and Martha are both buried at Rookwood Cemetery.