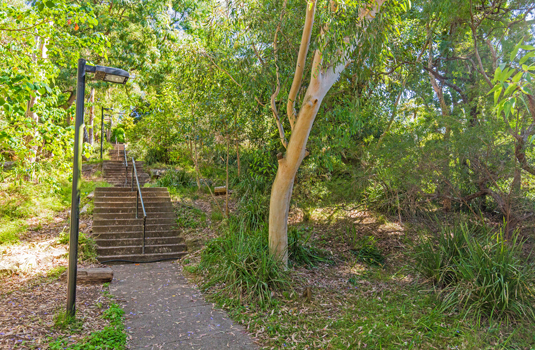 Harbourview Park is a cool leafy oasis in the centre of the residential development of Woollahra. Its mature trees provide a green canopy over much of the park. It is a pleasant shortcut on a walk from Bondi Junction to Double Bay. The small playground, with rubber softfall and natural shade, includes a three-swing set, bull rider, climbing frame with slide, sprung animal rockers and basketball hoop.

Entrance from either Magney Street, Russell Street or Bathurst Street

Dogs permitted on a leash at all times.

Harbourview Park was established as a result of an agreement undertaken on 15th October 1900 between Woollahra Council and Edward Knox Harkness. The land on which the park is now established was originally part of the Cooper Estate, which belonged to the Cooper Family of whom Sir Daniel Cooper (1821-1902) of Woollahra House was the head.

Cooper sold it and surrounding land to Edward Knox Harkness. Harkness was a local land developer and builder who was responsible for (among other projects in the Municipality) developing the land around Bathurst Street, Edgecliff Road, Magney Street, Harkness Street, Russell Street and Edward Street. Council minutes from 1898 to 1900 indicate a considerable amount of discussion about continuing problems with stormwater drainage around this area (which Harkness termed Harbour View Park Estate No. 2).

The area was a natural drainage area to Double Bay and had a small creek running through it. With heavy rains, large amounts of sand, silt and building material washed down onto surrounding properties and roadways. As a result of the agreement, Harkness sold a number of lots of land to Council. This land, in addition to some other pieces of land originally dedicated as roadway and easements was used to form Harbour View Park. The Park took its name from the Harbour View (subdivision) Estate undertaken by Harkness which he seems to have chosen for its land marketing appeal. Harness's firm seems to have built most of the distinctive cottages surrounding the Park and he seems to have had a hand in naming surrounding streets: Harkness, Edward, Magney (who was Harness's legal representative) and Bathurst (where according to a descendant, he had recently taken a holiday).

Council Minutes also indicate that Harkness built of number of retaining walls and constructed drainage works in and near the Park, sometimes as a result of Council requests, so structures still existing in the park may date from 1898-1900.

The use of the park and its long term development is subject to the plan of management developed in conjunction with the local community. Download a copy of the Harbourview Park Plan of Management (PDF, 8.5 MB)