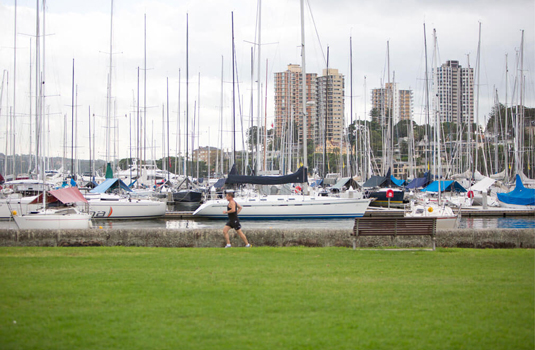 Rushcutters Bay Park is a harbourside park with a foreshore walk connecting to Yarranabbe Park. The park has two sportsfields that cater for cricket, rugby union and soccer, and it has an outdoor personal fitness  station. It is also a great place to enjoy a picnic on a sunny day or have a coffee at the parks next to the playground.

Dogs are permitted on leash at all times and unleashed between 3:30pm and 10:30am.

Originally called Blackburn Cove honouring the Master of HM Armed Tender Supply. Since the area saw much activity by convicts cutting reeds as a source of roof thatching in the early days of the colony, the name became established as the 'Rushcutting Bay' from which the present name derives. The creek has two arms; that rising in present day Darlinghurst and the other, Glenmore Brook, rising in Woollahra and which passed through lower Paddington - the valley also carried the romantic name Lacro.

A heritage-listed stormwater channel divides Rushcutters Bay Park between Woollahra Council and City of Sydney, which manages the western half of the park.