Shay Docking is described as one of Australia's most important landscape artists, whose representation of nature and the landscape reflected her own experience and love of the landscape in it's many forms - hills, volcanoes, rivers, trees and harbours. Docking is one of a group of important women artists to emerge in the mid-20th century in Sydney and is represented in major galleries in Australia. 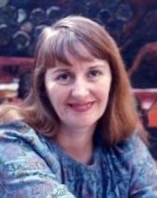 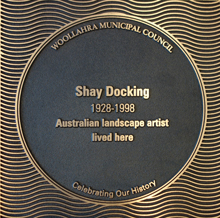 A plaque commemorating the life and work of Shay Docking was installed outside her former home and studio at 69 Cambridge Street, Paddington on 29 November 2019, the anniversary of her birth.

Shay Docking is described as “one of Australia's most important landscape artists” and one of a group of important women artists to emerge in the mid-20th century in Sydney.  The subject of several major retrospective exhibitions, Shay Docking was inspired by the natural world and her career was dedicated to creating paintings and drawings of the Australian and New Zealand landscapes.

Sheila (Shay) Lawson was born in Warrnambool, Victoria, in 1928, the youngest of seven children to parents Archibald Lawson, a clergyman, and Winifred Lawson (nee Davis), a music teacher and amateur painter. She began painting when her family moved to Boort in northern Victoria in 1939.

Shay completed secondary education in 1945 and with her parents left Boort for Melbourne where she began her art studies at Swinburne Technical College in 1947. Before finishing her training she accepted a freelance position illustrating myths and legends for the Victorian Education Department’s visual education section.

In 1952 she married Gil Docking who the same year was appointed education officer at the National Gallery of Victoria - the position involved touring Victoria with travelling exhibitions.  Shay used this opportunity to concentrate on her painting career, and she began painting seriously in 1953i. Between 1954 and 1955 Shay attended the National Gallery Art School, Melbourne. In his essay ‘A journey into the textured lands of Shay Docking’, Andrew Simpson writes that “one of Shay Docking’s favourite books was the “Physiography of Victoria” by the Australian geological polymath and scientific pioneer, Edwin Sherbon Hills.  The book was aimed at students and equipped them to think rationally about the processes behind the formation of the landscape and peel back the layers of time, in other words, how to understand the slow dance of Planet Earth”. He notes that some of Docking’s works actually started as sketches to accompany her geology projects.

“Geology allows me to understand my instructive and intuitive identification with the ancient past of the earth, our home - which in the deep recesses of the mind is the place the human soul (and the spirit of all creation) has inhabited for thousands of years.”

Shay moved to Newcastle in 1958 after Gil was appointed Director of the new Newcastle City Art Gallery and painted one of her first major works, ‘The Breakwater’ in 1959. In 1960 she exhibited her work in group exhibitions in Sydney and Melbourne and in 1961 she held her first solo shows in Melbourne (Argus Gallery) and Sydney (Blaxland Gallery).

When Gil was appointed Director of the Auckland City Art Gallery in 1965, Shay moved with him to Auckland.

The light and landscapes of New Zealand - extinct volcanoes, ‘great crouching hills’iii, and plant forms - inspired a large body of paintings and pencil drawings. Gil noted that “Shay Docking’s childhood was spent in Victoria’s Western District – an old volcanic region of open grassy plains with rounded isolated hills - not unlike the hills in the Auckland province. In fact it was the similarities of these hills which provided her transfer from one environment to another with a line of association going back to her formative years when she lived in a small town sited on the slopes of Tower Hill – an ancient collapsed, extinct  volcano with crater, cone and lake.”iv 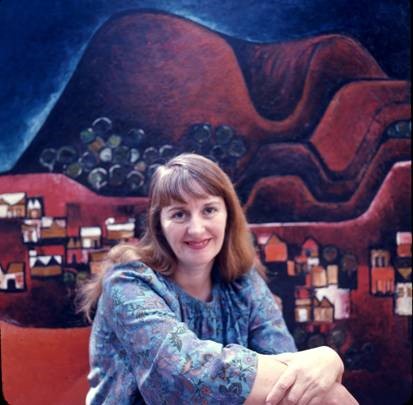 In New Zealand Shay was again fascinated by tree forms, painting and drawing the NZ Nikau palm and Kauri tree, amongst others, noting

“It looks to me as though the tree form has been important to me since I first began to paint. As a child I used a single tree form in watercolour paintings and later, after my art school studies, I worked on images of trees based on the eucalypt” 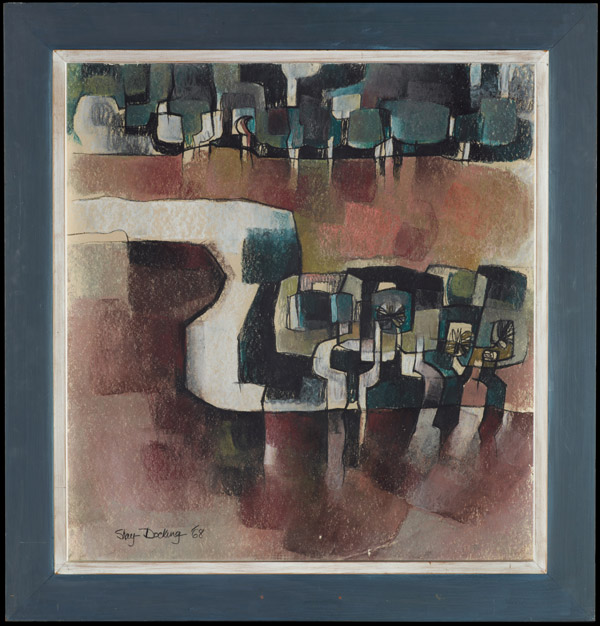 “In River 1, native trees are clustered along a river’s winding banks. The tree trunks appear as cuneiform characters, or as sickle-shapes gleaming through the dark canopy of foliage. The river itself makes a back-to-front ‘S’ shape.  By tilting its surface up, yet using poetic license to keep everything else in receding perspective, Shay has presented the luminous surface of the river bed as a hieroglyph. Rust coloured reeds grow on the river flats, beyond the clumps of totara trees”

“I had first begun to notice rivers in this way from hill tops, where I could look down on them, their surfaces reflecting with a white lustre in the landscape’

The Dockings returned to Australia in 1971 and Shay continued to paint and draw, producing a series of paintings inspired by the landscape of Ku-ring-gai Chase and another inspired by Sydney Harbour.

There doesn’t seem to have been any period of my painting life during which I haven’t painted on the themes of ‘the harbour’.  It is an ongoing subject which commenced in my student years and continually demands expression whatever other series I’m particularly engrossed in. Perhaps it’s basic symbolism – which is of safe anchorage and protection – is the underlying reasons for my returning to it ..’

Shay was also fascinated with the extraordinary convoluted forms of angophora trees, which are represented in many of her works from this period - volcanoes were a recurrent theme throughout her career.

In 1990,  Lou Klepac published ‘Shay Docking drawings’, containing a selection of work which had previously not been seen outside the studio, noting that the exhibition ‘Tower Hill and other volcanoes’, at the S H Ervin Gallery, Sydney in 1989, was the first time a substantial group of Shay Docking’s drawings had been shown.  Shay Docking was a prolific and ‘passionate draughtswomen’ having started to draw as a child, and regarded it as a private activity, stating that she had developed early ‘a fierce preference for working alone’

I chose to stay “isolated”. I’ve always found that the “inner eye”, the mystical sense of nature has been most active when I’ve been most solitary, and it has been a precious experience to be contemplative in order to reach transcendent plane of understanding the natural and divine order of things”

Docking’s drawings were “small in size and without colour. Nevertheless they are complete works in their own right, restrained yet highly finished, with a force and intensity of feeling which rivals her paintings and pastels”xi . Shay often returned to her drawings for inspiration 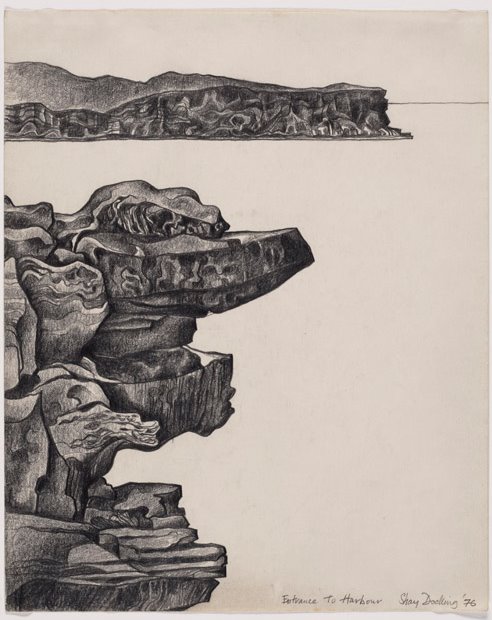 I have a clear memory that it was the shadows which fascinated me.  There was great delight in defining the edges and forms of objects, by emphasising these black, black, shadows with sharp lines and areas of dark colour.

In his essay in Klepac’s book, Hendrick Kolenberg notes that Shay Docking was an admirer of the drawings of Lloyd Rees and Eugen von Guerard, and describes Shay’s drawings:

With precise outlines, muffled graphite blacks, silvery greys and the power of paper to suggest space, she creates a sublime primeval landscape free of the distracting associations of colour.  Their sparseness and simplicity evoke the timeless, but since they are small and direct they are as succinct as they are delicate.

Throughout her career Shay had numerous solo and solo survey exhibitions both in Australia and New Zealand.

In 1963 William (Bill) Dobell opened her one man exhibition at Farmer’s Blaxland Gallery -  Gil and Shay had become acquainted with William Dobell during Gil’s tenure as the first full-time director of the Newcastle Art Gallery.xiv 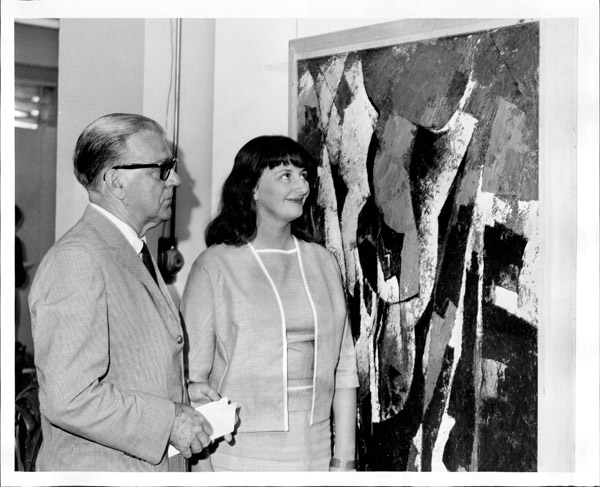 Shay produced the publication ‘Tower hill and other volcanoes’ in 1987 to accompany a survey exhibition held at Warrnambool, Bendigo and Swan Hill galleries and her works have also been included in many public exhibitions – including an 1982 travelling art exhibition organised by the AGNSW and ‘The Sydney Harbour Bridge 1932-1982’ exhibition at the Art Gallery of NSW.xv 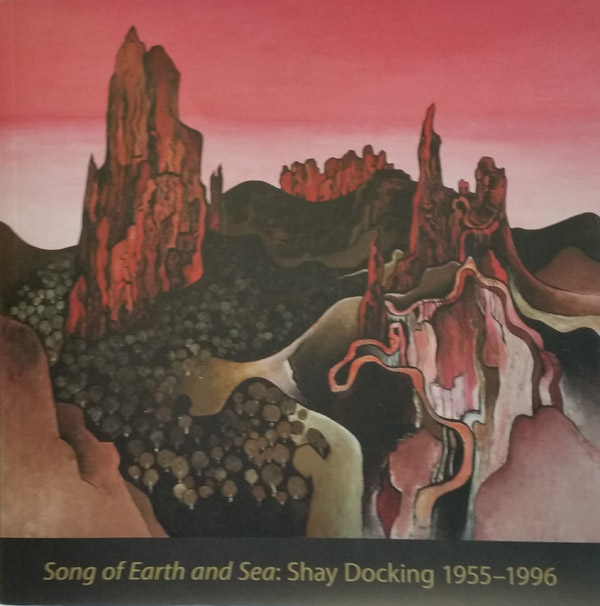 A major retrospective exhibition of Shay’s work titled ‘Song of Earth and Sea: Shay Docking 1955-1996’ was held at Macquarie University Art Gallery in 2011 and at the Maitland Regional Gallery in 2013.xvi The accompanying catalogue paid tribute to Shay Docking’s career as an Australian artist through a series of essays. 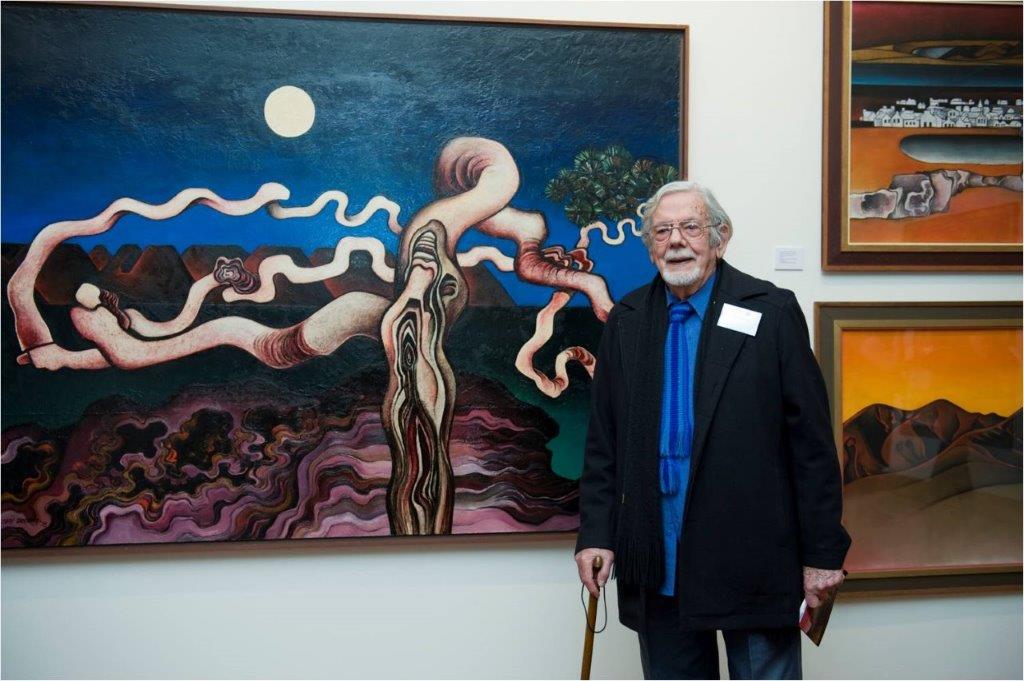 Shay Docking’s work is represented in the major galleries and many regional galleries of Australia and New Zealand as well as in private collections.  Shay died on 19 November 1998 aged 69.xvii

“Visual representation of landscape takes many forms.  Docking’s panoramas are a sumptuous vision of a landscape embraced lucidly, a vision based on the same metaphysical and spiritual journey many Australians struck by the splendour of the natural world have taken.  While some use symbolism and others use realism to interpret this world, the textured lands of Shay Docking are a unique combination of both, a symbolic realism that is powerful, enigmatic, idiosyncratic, intellectual, emotional and, above all, irrefutable and irresistible.”

In her essay for the Macquarie exhibition catalogue, curator Rhonda Davis argues that Shay Docking “should be championed as one of Australia’s most accomplished surrealist artists of the late twentieth century”, noting “with profound insight, Docking once said through art we can be helped to relate to our environment’.

“Shay Docking brought surrealism an Australian accent – with its landscapes drenched with the powers and rhythms of nature.  Docking delved into the sacredness of the environment, not as artifice, but as a pulsating and guiding force”.

Shay's studio was the front room on the first floor. Below, in the entrance hall, there is still a slit in the ceiling – Gil had, at one time, cut a long trapdoor in the studio, about 2m by 10cm so that larger works could be merely dropped through the floor and out the front door rather than being carried down the stairs.

This much loved house became a focal point for family and friends in the years following Shay and Gil’s return from New Zealand, and a lasting legacy was created with the gift of the house to the Art Gallery of NSW following Gil’s death in 2015.

ix From the artist’s journals and notes.  Klepac, Lou with an essay by H. Kolenberg. Shay Docking Drawings, The Beagle Press, Sydney 1990 : p. 40

x From the artist’s journals and notes. Klepac p. 8

xii From the artist’s journals and notes. Klepac p. 22

xviii Simpson, Andrew “A journey into the textured lands of Shay Docking” in Davis and Janiszewski : pp. 18