On the walkway between Beach and Bay Streets, Double Bay 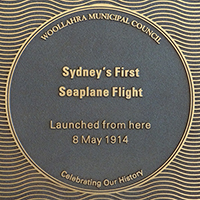 Sydney’s seaplane history began on 8 May 1914 with the test flight of a privately owned Farman hydro-aeroplane, the property of Lebbeus Hordern of Darling Point. The seaplane took off from the waters of Double Bay, with French pilot Maurice Guillaux at the controls, and flew firstly towards Manly, then westwards to the city and back to its starting point, in the first of several flights made that afternoon. The exercise created considerable public interest, firstly among the several hundred spectators who had gathered on the shoreline to witness the event first-hand, and also through the considerable press coverage generated nationwide both by this initial flight and the continuing trials of the Farman hydro-aeroplane over ensuing days.

During the middle decades of the twentieth-century, seaplanes would become an integral part of the life of Sydney harbour. While the operations begun at Rose Bay in 1938 were in no way directly consequent upon the achievements of Maurice Guillaux and Lebbeus Hordern in 1914, these early flights were a foretaste of the flying boat era, and belong to the same tradition.

The first seaplane flight in Sydney has both independent historical significance and is also notable as evidence that Australia was part of the growing international recognition of the credible potential of aviation. 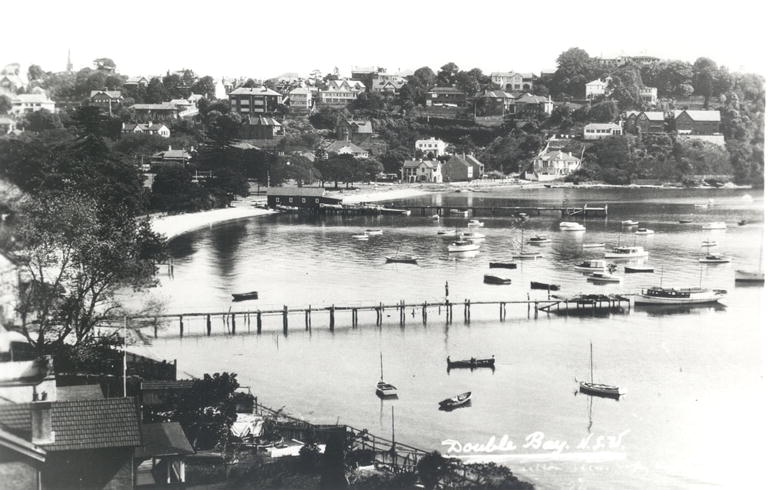 View of The Double Bay foreshore

The men behind the first flight

Sydney’s first seaplane flight brought together two larger-than-life characters from either side of the globe – one an Australian with the material means to finance the exercise, and the other a Frenchman with the technical skills and experience to make the flight possible.

Lebbeus Hordern, a 23 year-old Sydney-born heir to a mercantile fortune provided the means. Hordern had imported the Farman hydro-aeroplane at a cost of £1,600, having sighted the model on a visit to England in 1913 and arranged to purchase and ship the plane to Sydney (Crosson p.1). He acquired land on the Double Bay waterfront near the existing Victor Motor works – a marine engineering works which occupied a site presently defined by the residential buildings at 18-26 Stafford Street – and erected a shed to store and maintain his craft.

Six years later, his enthusiasm for seaplanes unflagging, and having imported further craft to house, Hordern would build a dedicated hangar and apron on the foreshore (WMC B/A 238/1920). However, in May 1914, it was this rudimentary waterfront shed that was the centre of the activity of assembling and preparing the Farman hydro-aeroplane for its first flight.

Born on 31.5. 1891 at Retford Hall Darling Point, Lebbeus was the son of Samuel Hordern and his wife Jane Maria, nee Booth (BDM NSW Ref 38784/1891; SMH 13.6.1891p.1) and the great-grandson of Anthony Hordern, founder of what had become, by Lebbeus Hordern’s youth, and under his father’s direction, Sydney’s largest retail firm. The newest incarnation in the firm’s retail history, the Palace Emporium, had opened in 1905 - a ‘universal provider’ housed in a lavishly appointed six-storey building with frontage to George, Pitt and Goulburn Streets, and occupying most of a city block. The success of this undertaking and all that had been achieved before it was to fund Lebbeus Hordern’s enthusiasm for flight.

Lebbeus was the youngest surviving of the nine children born to Samuel and Jane Hordern. He had been educated in England and was only eighteen years old when his father died, leaving estates sworn for probate of £2,925,925 (Teale ADB). Young Lebbeus Hordern found himself at that time joint heir with two brothers to the bulk of his father’s estate.

Lebbeus’s enthusiasm for flight was a logical progression from his own passion for fast cars and his father’s well-known indulgence for marine craft – the history of Samuel’s Bronzewing series of luxury yachts including ownership of the first diesel-powered yacht in Australia (Early Birds p. 7). In conversation with the press after his first flight in the Farman hydroaeroplane on 8.5.1914, Lebbeus Hordern was asked: What about motoring now?' - 'Motor cars?' he replied, with emphasis. 'Why, motoring isn't in it with flying. ...Flying is the, sport for me after this.'
(Scone Advocate 12/5.1914 p. 4)

While Lebbeus Hordern is believed never to have himself obtained a pilot’s licence, despite taking instructions – including tuition from his 1914 pilot Maurice Guillaux – his enthusiasm for aircraft continued unabated in the post-war period. Forming a consortium, Aerial Company Ltd, Hordern oversaw the purchasing of land craft, but maintained an abiding interest in seaplanes, purchasing two Curtiss Seagull Flying Boats and two Short Shrimp bi-wing seaplanes. By 1926, Hordern’s interest had turned to a craft of a scale too large for his Double Bay base – the Short Bros Felixstowe F5 Flying Boat – for which he erected a large hangar at Botany Bay.

While Hordern’s initial interest in flight was, in his own words, sporting, and while his purchases might well be seen as the outcome of a highly personal impulse, there is little doubt that Lebbeus appreciated and considered the broader applications of flight, and the craft in his ownership were used for serious pursuits, such as survey work and reconnaissance missions.

The Farman Hydroplane which featured in Sydney’s first seaplane flight was, later in the same year, placed at the disposal of the Australian Naval and Military Expeditionary Force raised to neutralise and occupy German territories in the Pacific. While the craft proved mercifully surplus to requirements, and remained packed in its crate throughout that undertaking (Early Birds pp 7-8) its loan to the expedition not only illustrates the general shift in national emphasis as Australia prepared to play its part in the 1914-1918 war, but also demonstrates a different side to Lebbeus Hordern, who was frequently dismissed as an extravagant ‘merchant Prince’, his life summed up in one source, published five years after his death, thus: Few people have been able to crowd into the space of 37 years such a life- time of experience as the late Mr. Lebbeus Hordern - a life of extraordinary gaiety, interspersed with periods of domestic unhappiness, two marriages, a big divorce suit, adventures and travel over the world by land, by sea, and by air, years of service in the Great War, all ending in a tragic and mysterious death alone in the very prime of manhood and prosperity.
(Australian Womens Weekly 8.7.1933 p.2)

This writer makes no mention of Lebbeus Hordern’s contribution to aviation history, however his passion for flight did not go unrecognised at the time of his death. Lebbeus Hordern died at his Darling Point home, Hopewood House on 10.9.1928, having overdosed on a sedative drug. During the grave-side funeral at South Head cemetery on 13.9.1928, five aeroplanes from the New South Wales Aero Club flew over the ceremony to pay their respects to this early proponent of flight. (SMH 14.91928 p.17)

The other chief contributor to the events of 8 May 1914 was Ernest François Guillaux, known generally as Maurice, a pilot who was part of the early ascendency of French aviation development. Guillaux, born in Montoire-sur-le-Loir on 24.1.1883 (Dougherty, Part 1) had obtained firstly his civilian pilot’s licence (no.749) on 19.2.1912, and nine months later a second class military licence on 19.10.1012. (Lockley p. 1).

Guillaux appears to have found ready employment in the aviation industry, operating as a pilot for the Caudron aircraft factory by June 1912, and rising to the position of Chief Pilot for the Clement-Bayard company (Dougherty). Guillaux also appears to have been involved in the more flamboyant aspects of aviation - with exhibition flying and competitions, establishing a number of early air records. It was an alleged irregularity in one of these contests which is credited with sending Guillaux abroad (Dougherty), equipping himself with his own aircraft and bringing it to Australia, to try his hand at winning sponsorship here. The aircraft he brought with him, a Blériot XI monoplane, and in which he staged exhibitions of his flying skills to the Australian public, as well as making the first airmail flight in Australia, today hangs in Sydney’s Powerhouse Museum, as a testimony to the impact which Guillaux’s visit to Australian made.

The visit from Guillaux wasn’t the first local display of aviation - adventurer Harry Houdini having made the first powered, controlled flight in Australia in 1910. Guillaux, however, captured the public imagination in a variety of ways. One of the more sobering realisations arising from his displays and his conversations with the press was a fresh understanding of the capacity for the use of aircraft in warfare, underlined by the revelations which emerged of the preparedness of the French military for that deployment. This prompted certain sections of the Australian press to chide the nation on its relative delay. The Wright Brother’s first demonstration of powered flight was scarcely a decade behind the world when Guillaux made his visit to Australia, and it is telling of his visit’s influence on local thinking that Australians were prompted to consider the more menacing potential of these developments. Guillaux himself tactfully complimented the Australian authorities on the advances made with their fledgling facility at Point Cook, (Lockley, p. 2) but the local press were less accommodating.

It’s been suggested that Guillaux apparently showed some interest in settling in Australia – the outbreak of war interrupting any such plans, and Maurice Guillaux not surviving the war to revive them. He died at Villacoublay in France on 21 May 1917 in an accident involving an aircraft test, and was buried at Neuilly-sur-Seine.

Press accounts of Sydney’s first seaplane flight at Double Bay capture the elements of what made this event a landmark in our history. The detail of the preparations, the moment of take-off, the reaction of the several hundred who watched, are captured in detail in accounts published in the Sydney and regional newspapers.

The Herald waited until its Monday edition to publish the account of one of its journalists who apparently was treated to a seat in one of flights which Guillaux was to make during the course of Friday 8 May 1914, and combined in his account the splendour of the perspective, the potential for bombardment and the physical sensation of the experience: Guillaux the debonair! glancing over his shoulder in a mischievous way to watch the effect upon his passenger of a 50 yards flat drop into an air-pocket over Circular Quay; waving his hand to a party o£ Lilliputian tennis players, playing on a secluded court in North Sydney; but always secure, always ready for an emergency.
(Sydney Morning Herald 11.5.1914 p 11)

As well as the press, and Hordern himself, Guillaux piloted a number of other passengers on that first day, including a future Hollywood actress, Louise Lovely, and flights continued to be made over the course of the following weeks, increasing the profile of the exercise with each fresh set of press coverage. In this, the flamboyance of owner Lebbeus and showmanship of pilot Guillaux can only have been an advantage. The account of another game passenger, grazier F D McMaster of Cassilis, spoke of the calmness of his pilot - who had smoked a cigarette ‘while surrounded, by all the dangers associated with aviation’ –which, coupled with Guillaux’s obvious skills, had helped allay his own feelings of nervousness. 'For years I have wished to fly, and M. Guillaux's arrival in Australia gave me an opportunity. By the way, I think Mr. L. Hordern deserves full credit for his enterprise in importing this hydroplane. Evidently he intends to master it, and he is a plucky chap to have done so much already.'
(Mudgee Guardian and North Western representative 18.6 1914 p. 6)

The event raised the awareness of the Australian public of the developments already made and the potential yet to be achieved in aviation, which, for a country with an extensive land mass and a scattered population was especially relevant.