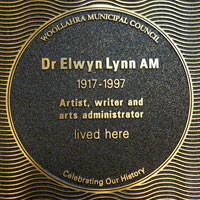 Elwyn Lynn had a notable and influential career in the arts in Australia – as an art critic and writer, artist and arts administrator.

Elwyn (Jack) Augustus Lynn was born in Canowindra, N.S.W. on 6 November 1917 to parents Leonora (nee Johns) and William James Lynn. The family moved to Junee when he was two. He attended Wagga Wagga High School and in 1938 he took up a Teachers Scholarship to the University of Sydney graduating in 1941. Between 1942 and 1968 he taught English and History in NSW high schools.

At University he was influenced by the views of the philosopher Professor John Anderson. Lynn became a life-long opponent of censorship and he became Secretary of the Sydney Free Thought Society, publishing articles against censorship.

Lynn was interested in art and from the mid 1940s he began teaching himself to paint. He established a reputation as an important Australian painter, winning his first major art prize, the Blake Prize, for a work titled ‘Betrayal’ in 1957.

In 1956 Lynn married Lily Walter, a radiographer, who had migrated from Germany to Australia in 1951. Persuaded by Lily’s experiences in Europe and her descriptions of paintings held there, Elwyn and Lily left for a tour of Europe in 1958. The tour and his visit to the Venice Biennale were to make a lasting impression on Lynn, particularly the ‘matter painting’ he witnessed which would influence his own painting in future years. 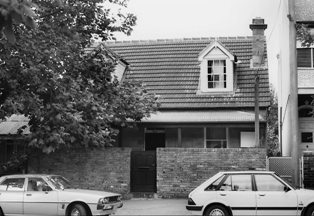 Lynn took up his first position as an art critic with the Sunday Mirror in 1963. He was appointed the first art critic of the Australian, and was later art critic for the Bulletin, Nation and the Weekend Australian. He was editor of the Contemporary Art Society's Broadsheet from 1955-1969. He served as associate editor of Quadrant from 1966-1978, then editor from 1978-1981. From 1983-1986 he was editor of Art and Australia.

Most of Lynn’s prolific writing was in the form of art criticism, journal articles and publications, but he also wrote eight books including:

As an arts administrator Lynn served in various capacities. He was secretary of the Contemporary Art Society from 1955-1963, and president from 1963 until 1968. He became Curator of the University of Sydney's Power Gallery of Contemporary Art at the Power Institute in 1969, a position he held for 15 years, retiring in 1983. He served as Chairman of the Visual Arts Board of the Australia Council between 1976 and 1980.

According to Peter Pinson, Lynn is recognised as Australia’s most ‘distinguished texture painter’. His work is represented at all the major galleries in Australia. There have been two major retrospectives of his work, a mid career retrospective of fifty works, at the Ivan Doherty Gallery, Sydney and a retrospective of his work from 1956-1990 was held at the Art Gallery of NSW in 1991. There were over 50 solo exhibitions of his work from 1958-2001 and he participated in over 150 group exhibitions from 1947.

Elwyn Lynn was awarded the Member of the Order of Australia on 9 June 1975 – citation: AM (Civil Division) QB 1975.   He was made a fellow of the Royal Society of Artists in 1982 and awarded an honorary doctorate of letters at the University of Sydney in 1989.  He was given an Emeritus Award, Australia Council in 1994.

Peter Pinson in Quadrant 2007 noted that ‘Lynn's writings as a critic and an author, his collecting for the Power Gallery which included public exhibitions of his purchases accompanied by comprehensive catalogues, together with his work in establishing the Sydney Biennales, made him an important bridge in bringing to Australia an understanding of overseas developments in the visual arts.’

Elwyn Lynn lived at 89 Moncur Street, Woollahra for 33 years from 1964 until his death on 22 January 1997 aged 79. According to his biographer Peter Pinson ‘A career with half his range of achievements would be considered a very busy and successful one. As far as the visual arts are concerned, we probably won't see his like again.’