Past winners of the Woollahra Digital Literary Award 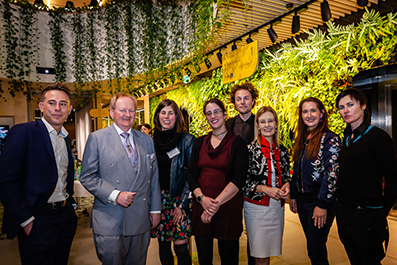 The following winners of the 2019 Woollahra Digital Literary Award were announced at Woollahra Library at Double Bay on Thursday 30 May 2019.

Judge’s comments: In Rachel Ang's “Toot Toot”, a run-in with an ex turns her protagonist's otherwise banal train trip into an emotional vivisection that transforms the landscape. Her protagonist moves from acting out on her jealousy to realising that these behaviours are as comforting as they are self-destructive to, at last, moving on, all of which is facilitated by Ang's concise writing, deft visual storytelling, and eye for detail. 'Toot Toot' offers storytelling that is vivid and specific, honest and illuminating. In excavating the journeys both on which we embark on a daily basis, Ang unsettles the familiar and skilfully makes familiar her protagonist's psychological landscape.

Judge’s comments: Fiona McGregor’s retrospective account of the publication and reception of Kathleen Mary Fallon’s little known 1989 novel Working Hot is a rich work of literary archiving and activism. This is far more than an account of a single (and singular) text – “Don’t worry, I’m not going to do a blow by blow exegesis,” McGregor assures us – as it captures a long history of intersections between Australian publishing and queer culture, while both positioning the book within global literature and documenting McGregor’s early and formative reading practice. Centering and prioritising quotes from Mary Fallon, McGregor writes with both political fire and an urgent comic vernacular. “The Hot Desk: Working Hot by Mary Fallon” is an exemplary and enlightening essay, one which demonstrates that literary criticism can be, and often is, at the forefront of forging new ways of writing non-fiction within digital spaces.

Judge’s comments: The spaces “Nine Million Branches” by Jason Nelson encourages us to interact with the everyday: a shopping mall, a bedroom, a lounge room, a computer screen dizzy with words - but he uses the rabbit-warren-like structures of the web to direct our gaze in ways only possible in poetry, and online. Tiny details are circled in crude red pen, drawing us in to contemplate a quilt, an ear, an escalator. Once clicked on, the screen zooms in to a short poem, or shifts our gaze to see this object in a new way. The tone of his poem is cheeky and playful, as is the awkward, even sometimes ugly visual aesthetic. "Nine Billion Branches” by Jason Nelson has a distinctive voice, and is like nothing I have engaged with online before.

The following winners of the 2018 Woollahra Digital Literary Award were announced at Woollahra Library at Double Bay on Thursday 31 May 2018.

Judges comments: ‘Eloise Grills’ series of graphic journal entries for Scum Magazine, published over a twelve-month period, thrive on digital intimacies expressed through a combination of comic art and social media screen shots. Grills is a master of both the visual form and narrative memoir. Her confessions – and they are confessions – are heartfelt and honest. Grills effectively explores demanding contemporary medical practices, alongside the comfort and complexity to be found in relationships. Her diarised contemplations – pushing the personal essay form to its limits – are equally internal and outward looking, engaging with how to live, and develop as an individual, in a busy, chaotic time.’

Judges comments: ‘Reading Second Life is like watching yourself be dreamed by another. The landscapes of this novella are familiar but disjointed, jumbled, and heavy with surplus associative meaning. The protagonist is, oddly and inexplicably, a real New York punk writer and artist exhumed and given new life in a northern NSW village. In Second Life Wright explores the liminal space between sleeping and waking; fiction writing, memory and dreaming. This novella is like no other I have encountered, though at a stretch it is slightly reminiscent of Ben Lerner’s 10:04, in that at the deep heart of the novella, the protagonist is displaced and renamed; another dreamlike version of herself. Second Life is also reminiscent of Twin Peaks, in that it abides by no logic other than the logic of dreams. Second Life offers a challenging but rewarding reading experience; rich with philosophical insight and magical lyrical turns.’

Judges comments: ‘In this seamless and masterfully concise horror story, a woman finds herself living at the bottom of a lake. Cleverly playing with the device of the double, Rawson takes a bold premise to satisfying extremes.’

To mitigate a conflict of interest, the Short Fiction winner was unanimously selected by all three judges.

The judges of the 2018 Woollahra Digital Literary Award selected the following shortlist of 14 entries, out of 99 entries received:

The following winners of the 2017 Woollahra Digital Literary Award were announced at Woollahra Library at Double Bay on Tuesday 27 June 2017.

Judges comments: 'Timely, political, historical, and lucid.'
'Vanessa Berry is an expert tour guide of a Sydney whose lost history is buried just beneath its shiny, new surfaces. In 'Excavating St Peters', Berry roams a misunderstood suburb, giving lyrical depictions of a kind of beauty that others might see as banal, and, in the meantime, gives a documentary-like take on political protests against over-development. This is nonfiction writing of the highest order.'

Judges comments: 'A verse novel that charmed in a matter of stanzas. Surprising character development, witty and original observations, honest representation of a prickly teen trying to find her place between worlds. A very enjoyable read.'