William Warrell was a leader among Sydney Aboriginal people, and well-known to colonial Sydney as a whole. While he was the subject of numerous paintings and sculptures, he also played an active role in establishing and maintaining cross-cultural connections. In his later years, Warrell became synonymous with the Rose Bay area where he lived. 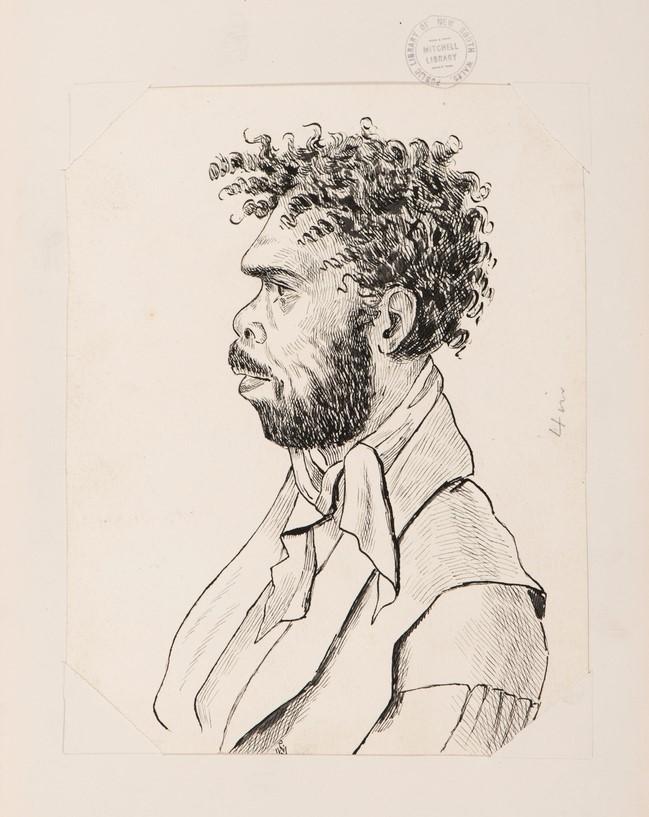 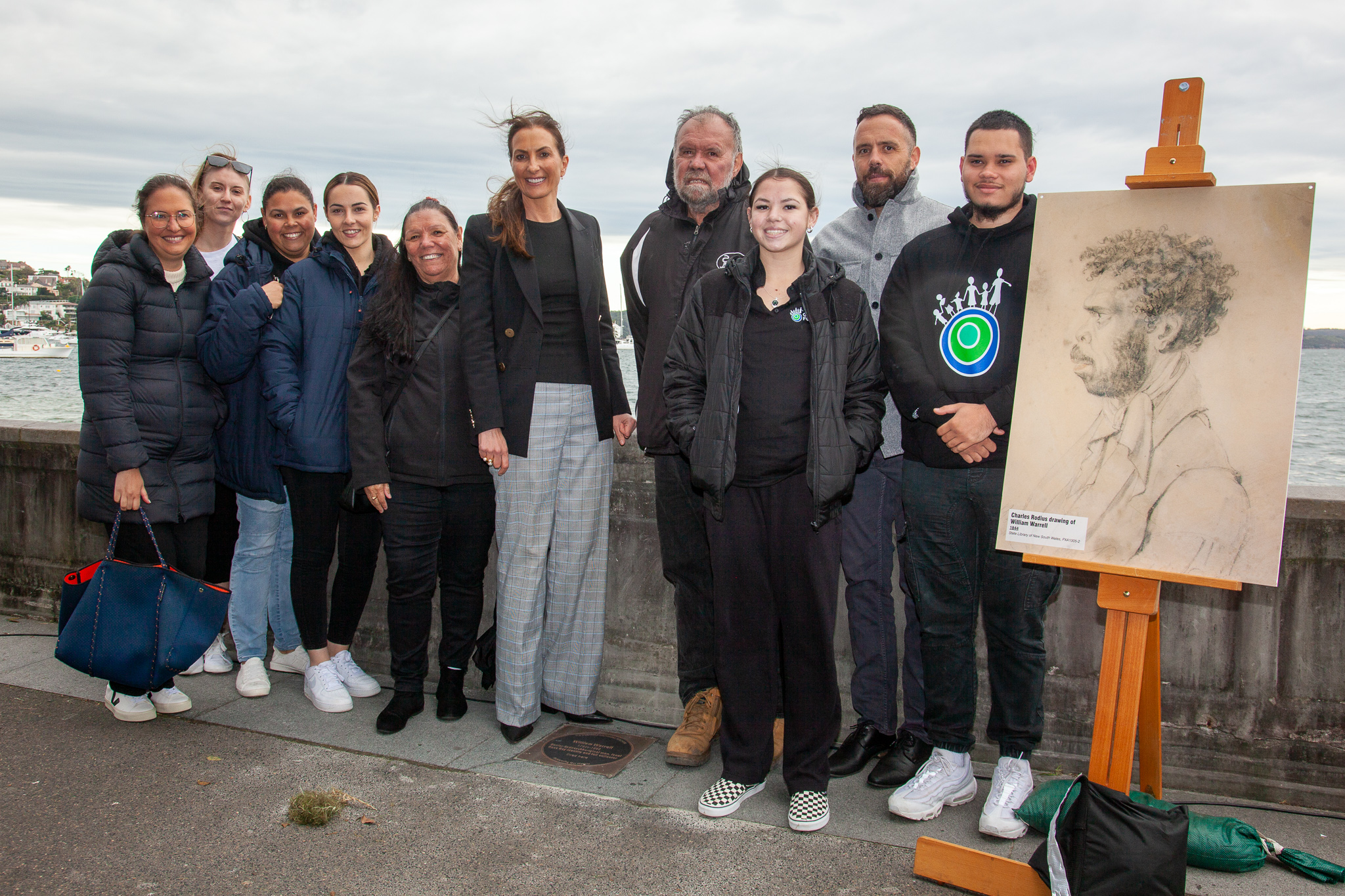 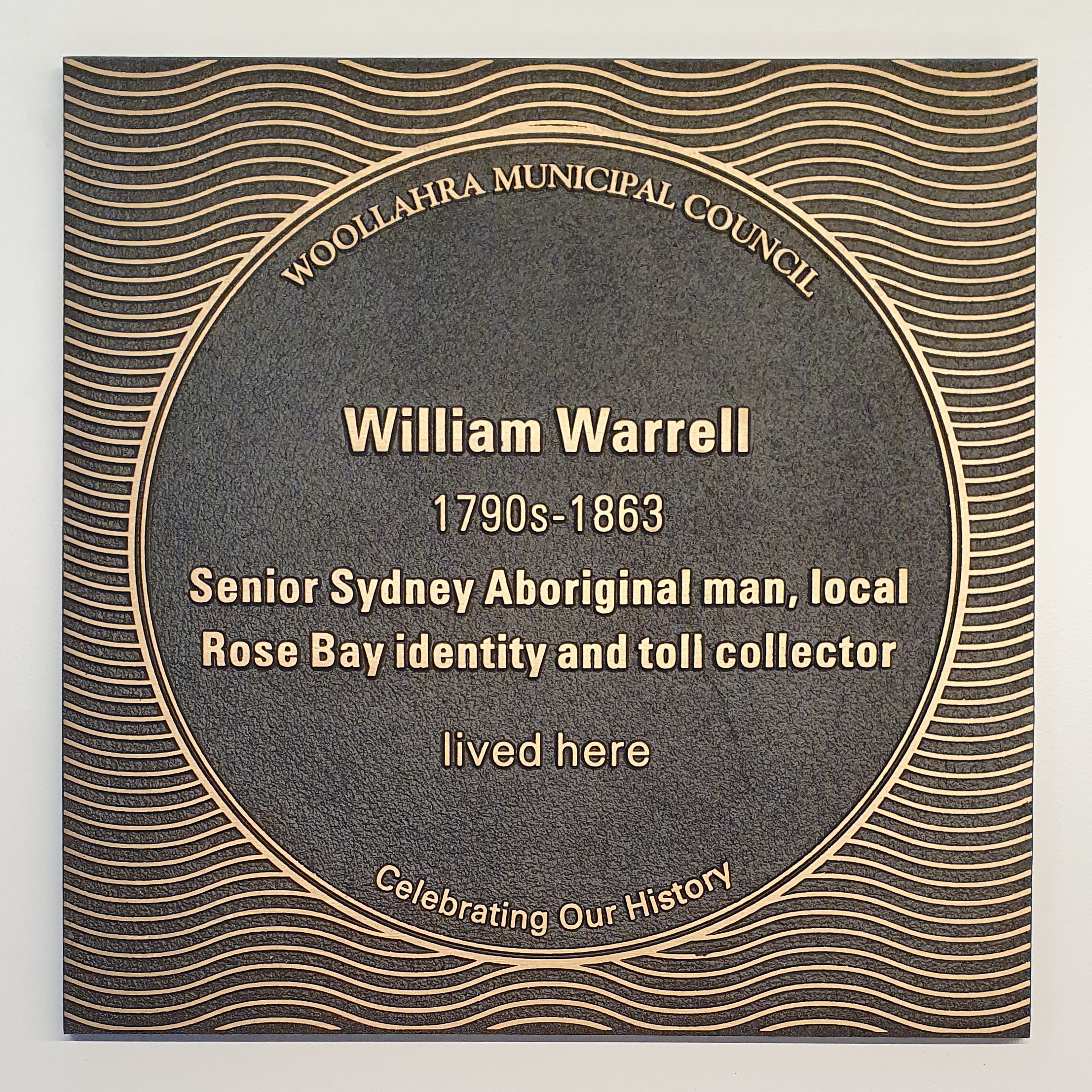 A plaque commemorating the life of William Warrell was unveiled on 30 May 2022 on the Rose Bay promenade.

William Warrell lived within his traditional lands at Rose Bay in his later years.

William Warrell was born into the first generation of Aboriginal people whose lives had always been subject to the impact of colonial imposition, but who had first-hand access through their immediate elders to a reserve of traditional knowledge and maintained customs. It was a unique transitional period, within which Warrell became a community leader, while navigating also the world of the Colony.

Warrell’s confident negotiation of his interconnected world, while also maintaining his Aboriginal identity, can be seen as a continuation of the role earlier taken up by Bennelong and Bungaree. Like Bungaree, Warrell was referred to by Europeans as the ‘King’ of the ‘Woolloomooloo Tribe’ or the ‘Chief’ of the ‘Rose Bay Tribe’ - terms referencing both his leadership qualities and his association with Woolloomooloo, Rose Bay and The Domain, as much as they also reflected the European tendency to assign familiar hierarchical structures to all social groups, and to tie individuals to permanent places.

In terms of family history, William Warrell was linked by his father to the Illawarra and by his mother with Botany Bay. He was a cousin of Cora Gooseberry, the second wife of Bungaree and ‘Queen’ of Botany Bay, with whom he shared a close and long-lasting friendship until her death in 1852. An account published twenty-one years after Warrell’s death references his wife, ‘Mrs Snowball’, who according to this source lived with Warrell on the New South Head Road at Rose Bay.1 Other sources record a solitary life in this period.

Nineteenth century western artists have left a considerable record of William Warrell’s likeness; locally based artists were drawn to him, and artists visiting Australia appear to have specifically sought him out as a subject. According to historian Keith Vincent Smith, ‘After Bungaree, he was the most sketched or painted Aboriginal personality of early Sydney’2. Local silversmith Julius Hogarth created statuettes3 depicting him in youth and age, and ten years after Warrell’s death, used his likeness on commemorative medallions sold at the 1873 Sydney Intercolonial Exhibition4. Variations of these souvenirs were later more broadly distributed, so that Warrell became, as author Paul Irish has pronounced it, ‘the generic face representing the idea of a former aboriginal leader’ given the words, ‘Ex rex’ were added to the inscription encircling the image.5

With age, a disability which had long afflicted William Warrell became especially debilitating, and the nick-name ‘Ricketty Dick’ gained currency. Alcoholism and illness took hold, and the image of Warrell as an object of pity and hopelessness came to define him, persisting after his death, and perpetuated by successive historical accounts. This is also the image of Warrell which is most associated with Rose Bay, given that he spent the last period of his (by then) greatly circumscribed life closely based in that locality, beside and around a shelter created for him by George Rawlingson, the caretaker of Sir Daniel Cooper’s Point Piper estate.

In describing his memories of Rose Bay in 1924, James Arthur Dowling wrote that

The land from there [the head of the bay] to the east end of the bay was a vacant swamp, or marsh, covered with bush extending past where “Ricketty Dick” had his camp … on a dry patch of land at the northern end of this morass, close to the main road…

Rawlingson himself, however, stated at the enquiry into Warrell’s death, that he had known William Warrell for thirty-six years, suggesting a long connection between Warrell and the estate that Rawlingson managed. Rawlingson further summoned a very different image of his friend – ‘a stout able young fellow’6 consistent with the Warrell who gave boomerang throwing exhibitions in Hyde Park7 and travelled widely in pursuit of culture and Country and connection with his people.

Another aspect of William Warrell's local story is that Pannerong (Rose Bay) is a place of long-held significance to Aboriginal people. Early European accounts, such as those of Judge-Advocate David Collins, record it as the setting for important cultural events and traditional ritual, and it was known in Colonial times as the burial place of Bungaree and his wife Matora. In this context, Warrell's choice of Rose Bay as a place to settle can be seen as a form of homecoming.

Even in his final days of illness, William Warrell was exercising his autonomy in refusing the assistance available to him through the Benevolent Asylum, and sleeping as often as not outside the shelter that Rawlingson had built for him. He was found lifeless in that position, on Friday 11 June 18638

In July 2010, at the suggestion of the Woollahra History and Heritage Society, a plaque to Bungaree was placed in a small rockery garden above the western end of Rose Bay, overlooking its expanse, and the garden renamed by Woollahra Council as Bungaree Reserve. The placement in May 2022 of a plaque at the head of the Bay to commemorate the life of William Warrell marks both the historic and the living connection of Aboriginal people to this place.

We would like to acknowledge the La Perouse Local Aboriginal Land Council and the Gujaga Foundation, who participated in this Woollahra Council initiative.

Collins, David An Account of the English Colony in New South Wales ...[facsim.] , Adel, Libraries Board of South Australia, 1971

Smith, Keith Vincent ‘Who was Ricketty Dick?” in EoraPeople 20 March 2017