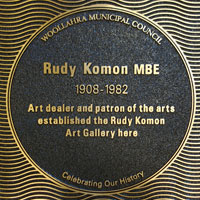 Rudy Komon was an art dealer, wine judge and connoisseur. He established one of the pre-eminent art dealerships in Sydney and introduced a new standard of relationship for the art dealer and artist.

Rudolph John Komon was born in Vienna on 21 June 1908 to Czech parents, Rudolph John and Anna Komon. After he left high school Rudy worked for a Czech newspaper as a sports and political journalist.  He was based in Vienna in the 1930s and he travelled throughout Austria and Germany, observing the rise of Hitler.  In 1938 Komon moved to Czechoslovakia and joined the underground movement. During this time he started his art dealing career, collecting and selling the work of local Prague artists.  After the war he worked as a journalist in Prague. He escaped from Czechoslovakia to Switzerland in 1948.

Rudy Komon migrated to Australia in 1950, arriving in Sydney on 26 August on the ship Strathnaver. Rudy married English woman and science teacher Ruth Spenser Stevens (1928-2001) whom he had met some five years earlier, on 9 January 1959. After initially living in Bellevue Hill, Ruth and Rudy purchased and moved to a house at 7 Marine Parade, Watsons Bay in 1962. Rudy was a regular morning swimmer at the nearby Watsons Bay Baths.

Soon after his arrival in Sydney Rudy decided to set up his own business and began selling antiques, specialising in paintings, from premises at 27 Albion Street, Waverley. He established his own form of artist-dealer relationship, setting new standards for the relationship based on traditions well-known in Europe but not practised in Australia. This tradition was the creation of a ‘stable’ where the dealer supported and nurtured the artist. One of the first artists Rudy took on was William Dobell, who became a friend and whose work Rudy remembered hawking at weekends. Some artists who became part of the ‘stable’ included Jon Molvig, Fred Williams, Alun Leach-Jones, Robert Dickerson, John Olsen, John Brack and Clifton Pugh.

The Albion Street premises were sold in 1958 and Rudy found new premises in Paddington, at 124 Jersey Road, at the corner of Paddington Street.  Rudy converted the ground floor of the building, formerly a wine saloon, into an art gallery which was opened in November 1959 by Harold Holt, future Prime Minister of Australia. The gallery, the Rudy Komon Art Gallery, was the first of its kind in Paddington and the opening exhibition was titled ‘Tom Roberts to Jon Molvig’. In 1964 Komon engaged the architect Neville Gruzman to redesign the gallery extending it to the upstairs area. Described by Gwen Frolich (who worked at Rudy’s gallery from 1961) as a ‘turning point’ in the gallery’s fortunes, the gallery reopened on 3 June 1965 to a growing interest in the arts in Paddington.

Rudy Komon was a lover of good food and wine. He was a generous host and enjoyed sharing meals with his many friends.  He was a well-known wine connoisseur and was a member of the Wine and Food Society of New South Wales and cellarmaster from 1956-76. He was recognised as having one of the best palates in Australia and judged wine at shows held in the major capital cities from 1959-79.

On 2 June 1973 Rudy was awarded the Order of the British Empire – Member (Civil) for the Arts.

Rudy Komon died on 27 October 1982 at Camperdown, Sydney. After his death Ray Hughes bought the contents of the Komon gallery and Ruth Komon established a memorial fund in Rudy’s name, the Rudy Komon Memorial Fund, with the Art Gallery of NSW to enable the gallery to purchase works by up-and-coming local artists. Ruth also bequeathed the Rudy Komon Gallery to the AGNSW.

Rudy Komon helped launch the careers of some of Australia’s most important artists. Described as a ‘big-hearted’ man he was enthusiastic in his business, and generous to his friends and to his artists, who he supported financially, professionally and personally.  He has been credited with revitalising the Sydney art scene and transforming the relationship between galleries and artists.