The walk takes approximately three hours and is a leisurely 5km walk. Alternatively select only a small part of the walk such as the historic Signal Station and Macquarie Lighthouse, Gap Park and its surrounding parkland at Watsons Bay or the Sydney Harbour National Park with its walk to Lady Bay and Inner South Head.

Places of interest along the Coast Walk include:

This section of the walk features uninterrupted views of the ocean, steep sandstone cliff and the city skyline. Take in the history of the Macquarie Lighthouse which marks the site of Australia’s earliest and longest continually operated light station and Signal Station at Outer South Head which was built in 1842 to observe and assist in the control of shipping. 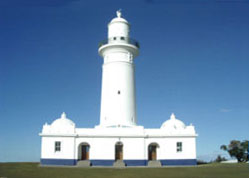 Walk along the about 100 metres from Signal Hill Reserve to the plaque and rock carving on the cliffs referring to the wreck of the ‘Dunbar.’ In 1857 a fast sailing ship miscalculated its entry into Sydney Harbour and was wrecked on the rocks below, only one person survived.

The cleft in the rocks at Jacob’s Ladder is the remains of a long extinct colonic dyke. The lower part of the gully shelters tall spreading figs, cabbage palms, tree ferns and lianes which contrasts dramatically with the stunted tea tree, casuarinas, Banksia, hakea and wattles on the cliff top heaths. Remarkably over 70 different species of native plants survive in this park.

On return from the gully take the alternative track along the old cliff route of the trams and experience the history of the trams which ran to Watsons Bay from 1909 to 1960.

Head on to Gap Park at Watsons Bay, one of Sydney’s most famous scenic destinations and take in the beautiful view.

Gap Park marks the boundary with Sydney Harbour National Park and was used by School of Artillery between 1984 and World War II. From the lookout you can see Inner South Head with Hornby Light and the high cliffs of North head. Continue on the walk to Cliff St and Camp Cove where you continue to the timber steps at the eastern end of the beach. 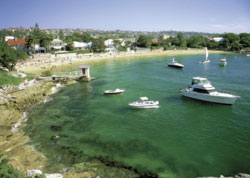 Continue on the walk from Lady Bay to South Head where more magnificent views of Sydney Harbour will unfold. Explore the myriad of tracks in this area but take care on the rock platforms below. These can be dangerous even in calm periods.