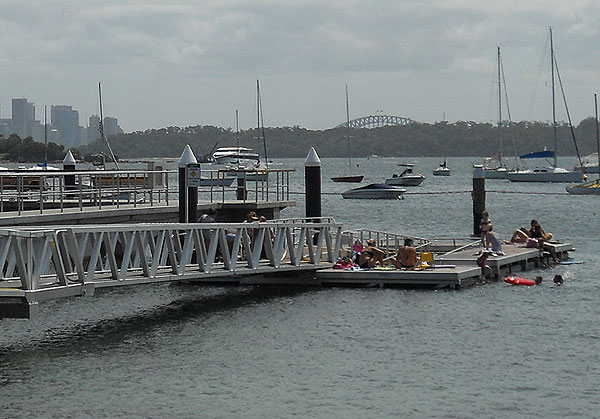 Watsons Bay Baths is a fully accessible harbourside tidal enclosure that is popular with all age groups. The baths consist of two floating turning board/sunbathing pontoons, a boardwalk and seating with great views of Sydney Harbour. The baths have Australia's first deep water wheelchair access to a tidal harbour pool.

Access to the aquatic wheelchairs stored on site requires an MLAK key.

MLAK keys are also available for purchase from the National Support Office of the Master Locksmiths Association (MLAA) or from many MLAA Business Members.

The first public swimming hole in Watsons Bay area was at Laing Point, located between Watsons Bay and Camp Cove, and was known as the 'Bogie Hole'. It was cut out of the rock by two Watsons Bay men, Jack Graham and Reg Norton around 1888 and proved a popular swimming spot. So popular that the pool was enlarged by the Council in 1895, and a dressing room built in 1898. Evidence of the bathing sheds no longer exists, however the excavated pool is still visible and is in use during the swimming season.

The succession of pools built along and around the Watsons Bay area demonstrates the popularity of harbour pools as recreational facilities for locals and tourists during the early years of the twentieth century. The popularity of the pastime was enhanced by the increased interest in swimming as part of a healthy lifestyle and as a recreational sport. The competitions of the modern Olympiad and the notoriety of swimmers such as Tony Fenech, Frank Jordan and Dawn Fraser, helped raise the profile of the sport.

The Watson Bay Baths are one of a number of harbour pools constructed in the late nineteenth and  twentieth century. The majority of the harbour pools identified in the National Trust of Australia (NSW)  Survey share a similar early history to the Watsons Bay pools, that is, that people had been swimming in pools that predate the enclosures that exist today. The nature of man made structures in contact with an exposed marine environment will always create maintenance issues, resulting in the need to repair or renew the structures over time. The Watsons Bay site provides evidence of the major construction or reconstruction phases in 1905, 1927, 1965 and 1975.

On 10th December 2010, the new Baths were officially open by the Mayor, Councillor Isabelle Shapiro. The Council spent more than $2 million renovating the historic harbour pool.

The upgrade is a significant historical event for the baths, which has been a popular swimming place for residents and visitors since 1905. The upgrade includes Australia's first all-ability water access ramp which opens the baths to all user groups, with the provision of two full immersible wheelchairs for public use. Other highlights include: