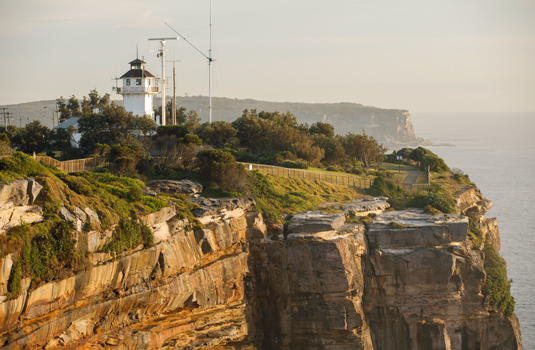 This small reserve offers spectacular views out to the ocean. The coastal walk passes through the park from Lighthouse Reserve to Gap Park.

Dogs permitted on leash at all times

The fortifications there were originally built to accommodate a 9.2 inch breech loading disappearing gun' as part of Sydney's coastal defence - two others were installed, one at Bondi North (still in position but buried) and the other at Clovelly. It was housed in the centre of the group and had a steel canopy with a slot through which the barrel protruded in the firing position. It was hydraulically jacked-up to the firing position with the recoil pushing it down under the canopy for reloading.

The gun was commissioned in 1893, the last firing there was in 1933 and it was removed in 1937 and replaced by two 6 inch MK 11 guns placed in each of the outer pits - these were removed after World War II. The barrel of the 9.2 inch disappearing gun can be seen at the Artillery Museum at North Head. A memorial was placed there in November, 1992 by the Royal Australian Signal Corps Association on behalf of its members while two plaques were also placed on March 30, 1993 placing the Reserve in proper historical perspective.