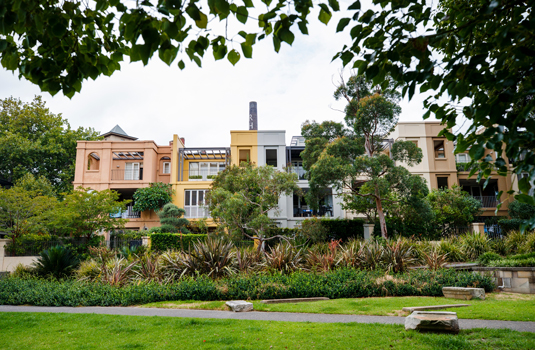 A green and pleasantly landscaped open space that provides opportunities for low-key informal recreation activities. The park reflects the village atmosphere of the surrounding area and incorporates many reminders of its former use as a hospital.

Opened 9 April 2005, the park takes it name from the Royal Hospital for Women which stood on the site and surrounding land between 1901 and 1997. Read more information on the design of the park (PDF).

The Benevolent Society of NSW transferred in 1901 from their original site near Railway Square in the city when that site was resumed for the new Central Railway Terminal moving to the 6.5 acre (2.6 ha.) area in Paddington that was originally granted to Roger Therry in 1832 on which the house 'Flinton' was built. There, the Society built and operated the Royal Hospital for Women, handing over the operation to the State Government in the early 1990s.

The Hospital closed in Paddington in June, 1997 transferring to new premises in the Prince of Wales Hospital at Randwick. The site is for development for public housing by the Stockland Property Trust - it was the last of the original land grants in Paddington that survived intact. See Royal Hospital for Women, Paddington: an Historical Outline for more information.