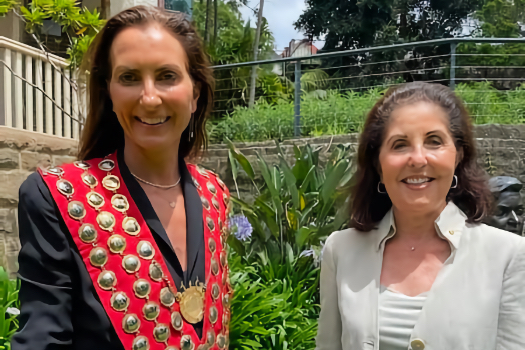 Councillor Susan Wynne has been re-elected as the Mayor of Woollahra, and Councillor Isabelle Shapiro elected as Deputy Mayor at the first meeting of the new Council, held on 5 January, with both terms to run until September 2023.

Woollahra Council welcomed four new Councillors and 11 returning Councillors at the December Local Government Election, with the Woollahra community electing the highest number of female Councillors in NSW, being 10 of the 15 Councillors.

The result is more than double the female councillor representation - 31 per cent - across councils in NSW since the last election in 2017.

Female councillor representation at Woollahra has risen consistently in recent years, from three Councillors in 1995, six from 1999-2011, seven in 2012 and nine in 2017.

“It is an honour and privilege to continue serving Woollahra as Mayor. I am looking forward to working with Councillor Isabelle Shapiro as Deputy Mayor and all the Councillors,” Mayor Wynne said.

“This role comes with great responsibility and I remain committed to working with our community in ensuring Woollahra is a wonderful place to live, work and visit.”

“I’d like to congratulate all of our newly-elected and returning Councillors, and also thank the previous Council for its contribution to the Woollahra community over the past four years,” Mr Swift-McNair said.

“We have a proud history as a progressive council, from our leadership on climate change, to our strong support of the arts and longstanding local disability and mental health initiatives, and 50 per cent women on our executive team.

“This result is another significant achievement for Woollahra Council and a wonderful reflection of our community as a whole, as our elected representation is a clear indication of the progressive nature of Woollahra’s residents.

“Our councillors have an exciting opportunity to work with residents and businesses to make a real difference in Woollahra, and I look forward to working with them in continuing to build and support an even more thriving local community.”