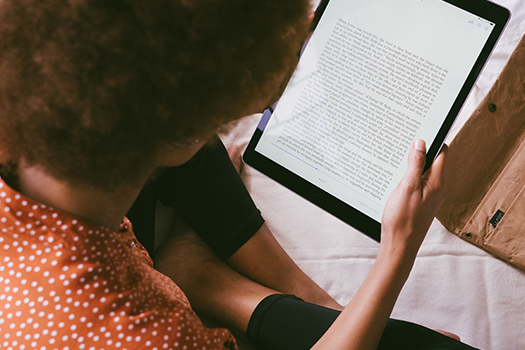 Did you know you can access a fantastic range of eBooks and eMagazines for free as part of your library membership? Perfect for times when you can’t make it into the library to pick up something new to read.

We use two different platforms for our eBook and eMagazine collection: Bolinda and Overdrive. You can access both by downloading the Libby app, available from the Apple App or Google Play stores. Sign-in by entering your library card number and PIN (usually your birthdate, ddmmyy). Read more about how to access our eResources.

Here are Woollahra Libraries’ Top 5 most popular eBooks and eMagazines to inspire your next read.

1 The Midnight Library by Matt Haig

Thirty-four-year-old Nora's life could be better. She's lonely, single and has just lost her job. Her cat dying feels like the last straw. What else is there to live for? Then she finds a library between life and death where she gets to try all the other lives she could have lived. The Midnight Library is a gloriously relatable novel about life, death and the in-between. It is about finding hope, playing chess, dumping regrets, and picking the right people around you.

2 Sorrow and Bliss by Meg Mason

Sorrow and Bliss is about a woman called Martha. She knows there is something wrong with her but she doesn't know what it is. Her husband Patrick thinks she is fine. By the time Martha finds out what is wrong, it doesn't really matter anymore. It is too late to get the only thing she has ever wanted. Spiky, sharp, intriguingly dark and tender, full of pathos, fury and wit, Sorrow and Bliss by Meg Mason is a dazzling, distinctive novel from a boldly talented writer.

3 Klara and the Sun by Kazuo Ishiguro

Set in a future where children's academic abilities are genetically enhanced and children are home schooled by online tutors. Parents purchase Artificial Friends (robots) to provide companionship to their children. Narrated by Klara, an Artificial Friend with outstanding observational qualities, Klara and the Sun looks at our rapidly changing modern world through the eyes of an unforgettable narrator to explore a fundamental question: what does it mean to love?

4 The Order by Daniel Silva

From bestselling author Daniel Silva, The Order is a new action-packed thriller featuring the enigmatic art restorer and master spy Gabriel Allon. Silva has entertained readers with thoughtful and gripping suspense novels featuring a diverse cast of compelling characters and ingenious plots that have taken them around the globe and back  The Order showcases Daniel Silva’s outstanding skill and brilliant imagination, and is a must read for both his multitudes of fans and growing legions of converts.

It is 1981. Glasgow is dying and good families must grift to survive. Agnes Bain has always expected more from life. After being abandoned by her husband, she descends into alcoholism. Her children try their best to save her, yet one by one they abandon her to save themselves. It is her son Shuggie who holds out hope the longest. Author Douglas Stuart lays bare the ruthlessness of poverty, the limits of love, and the hollowness of pride. Winner of the 2020 Booker Prize for Fiction, Shuggie Bain it is a blistering debut by a brilliant novelist with a powerful and important story to tell.

Available on Overdrive and Bolinda.

The Economist is the premier source for the analysis of world business and current affairs, providing authoritative insight and opinion on international news, world politics, business, finance, science and technology, as well as overviews of cultural trends and regular special reports on industries and countries.

HELLO! Magazine has been capturing key moments in celebrity’s lives ever since it was launched more than 20 years ago. Each issue is rich mix of articles and interviews from around the world balanced by a series of regular practical features designed to appeal to every type of reader.

New Idea has been Australia's most loved weekly magazine for more than 110 years, reaching over 2 million readers each week. Every issue of New Idea is full of fascinating features, the latest celebrity news, practical and delicious recipes and interesting real-life stories, as well as up-to-the-minute fashion, health and beauty advice.

Australia’s number-one selling weekly magazine. From the latest royal and celebrity news to food, health and lifestyle, Woman’s Day is a weekly burst of inspiration, education and escapism.

Founded in 1925, The New Yorker publishes the best writers of its time and has received more National Magazine Awards than any other magazine, for its ground breaking reporting, authoritative analysis, and creative inspiration.