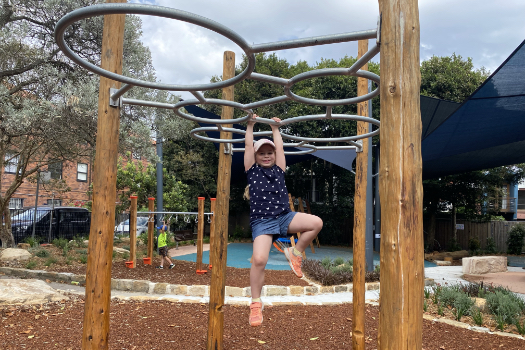 Plumb Reserve in Woollahra has had an exciting makeover

Things to do; Youth and families; Woollahra

Plumb Reserve, a popular playspace at Fletcher Street, Woollahra, has had a complete makeover, making it more accessible, inclusive, modern and engaging for children. The playground was redesigned in consultation with local kids and parents who were invited to offer their ideas as to what they would love to see in the new playground. In response to community feedback, a number of improvements were made to the original design - including adding a second set of monkey bars and providing extra screen planting between the playground and neighbouring residents. 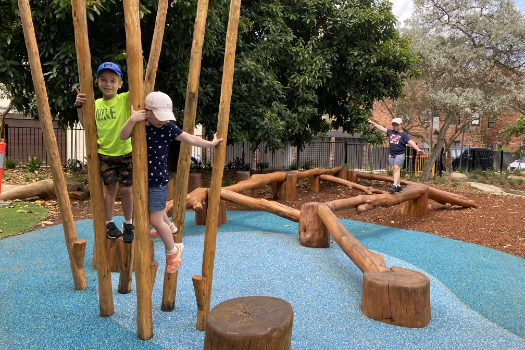 The result is an action-packed playground with a thoughtful layout and exciting new equipment, appealing to a greater diversity of kids. My kids immediately made a beeline for the monkey bars. There’s a set of lower bars, which is a fun challenge for younger kids. Then there’s also a large beehive structure set between four tall wooden poles, which is perfect for older kids to monkey around on. 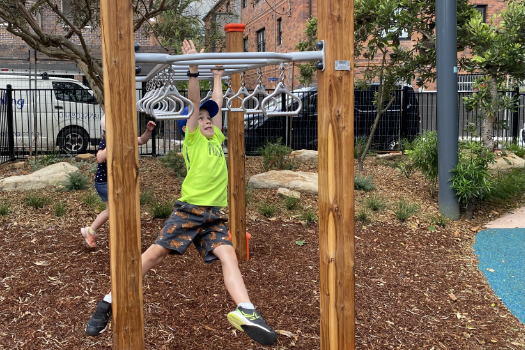 There is a swingset with four different kind of swings, accommodating children of different needs and abilities. There’s the accessible orange boat-style swing, the super popular birds nest net swing, a toddler swing and regular seat. 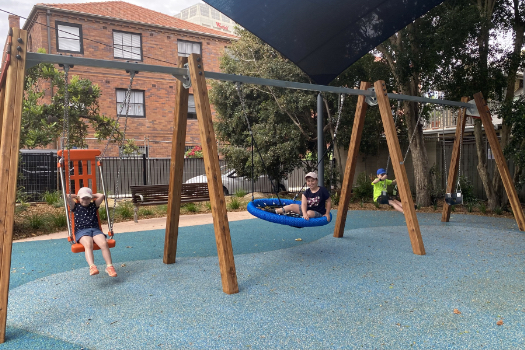 The kids love getting dizzy on the accessible roundabout and had a ball playing hide-and-seek in the large colourful play tower with double slide on one side and a curly-wurly slippery dip on the other. There’s also a smaller toddler slippery dip near by, as well as two talk tubes, at an accessible height, allowing children to talk, sing or whisper across the playground. 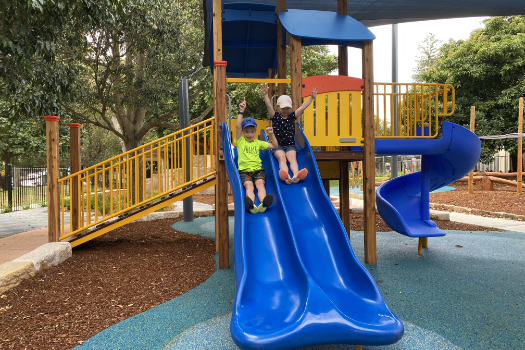 A crowd favourite has to be the massive sandstone rocks studded with climbing holds. What an achievement to reach the top of the graduated nature wall. We also loved the timber balancing beam trail as well as the tall balance poles. There is also a large stretch of newly-laid grass adjacent to the wooden obstacle course, perfect for picnics. 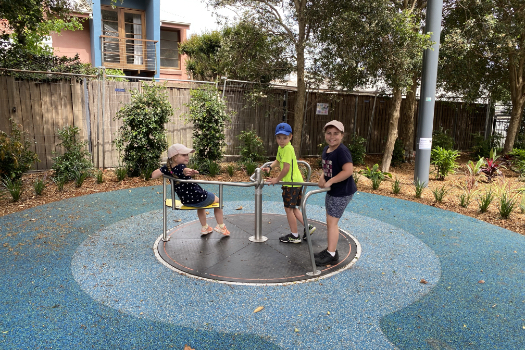 The ground has been laid with brand new rubber softfall flooring for accessibility and safety. There are new shade sails, a drinking fountain, fresh garden beds and accessible pathways.

The central table setting is a specially designed accessible table setting for multiple wheelchair users and children, creating a main hub and socialising space within Plumb Reserve. The table  is at a slightly lower height than a standard picnic setting for the intended users.

The flooring behind the rockwall has been upgraded with a special eco-friendly solid surface that protects the tree roots underneath and allows sufficient water drainage and absorption. The playground is also fully gated and has accessible parking right outside.

Plumb Reserve Playground was partially funded by the NSW Government’s Everyone Can Play program. This program offers support to councils to build inclusive playspaces that people of all ages, abilities and cultural backgrounds can play in.

Other new playgrounds to try out

Dillon Street Reserve in Paddington is now bigger and better! Woollahra Council received a 1300m2 parcel of land from Presbyterian Aged Care, giving us a unique opportunity to develop this precious open space to provide a range of recreational uses for the community.

The park improvements include:

These improvements are proposed to be followed with a second stage upgrade with available funding determined over coming months. This stage is expected to include tree planting; a swing set, picnic settings and the establishment of garden beds with tree, shrub and perennial plantings in the southern half of the Reserve. 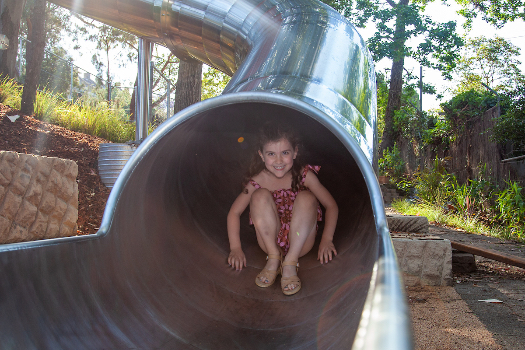 The playground at James Cook Reserve, otherwise know as Cooks Paddock on Victoria Street in Paddington is a small but well-loved playspace that needed some extra attention to make it a place that kids will enjoy for many years to come. We asked the community to help select the look and feel of the new play area in a ‘People’s Choice Vote’. The resounding winner was a nature-inspired design made of Australian cypress timber, which forms a wonderful setting for kids to have fun playing on the curved slide, scramble net, abacus panel, access stairs, play truck, balancing steps and spinner, along with the existing swing set.

You will also notice landscape upgrades at Cook's Paddock, including new turf, new garden beds with rocks, and hardy planting for nature play. Other improvements include levelling of the existing paving and a wider entry gate without steps to improve accessibility for wheelchairs, prams, and less-abled people. 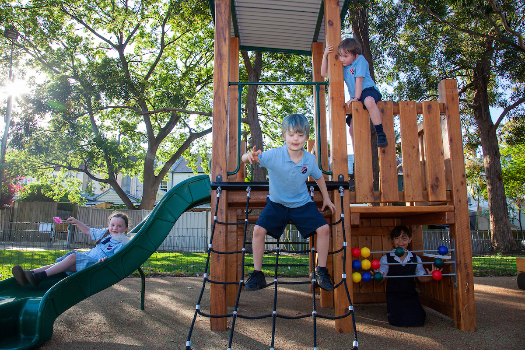 Things to do; Youth and families; Woollahra