Flying off the water and sailing into the sky 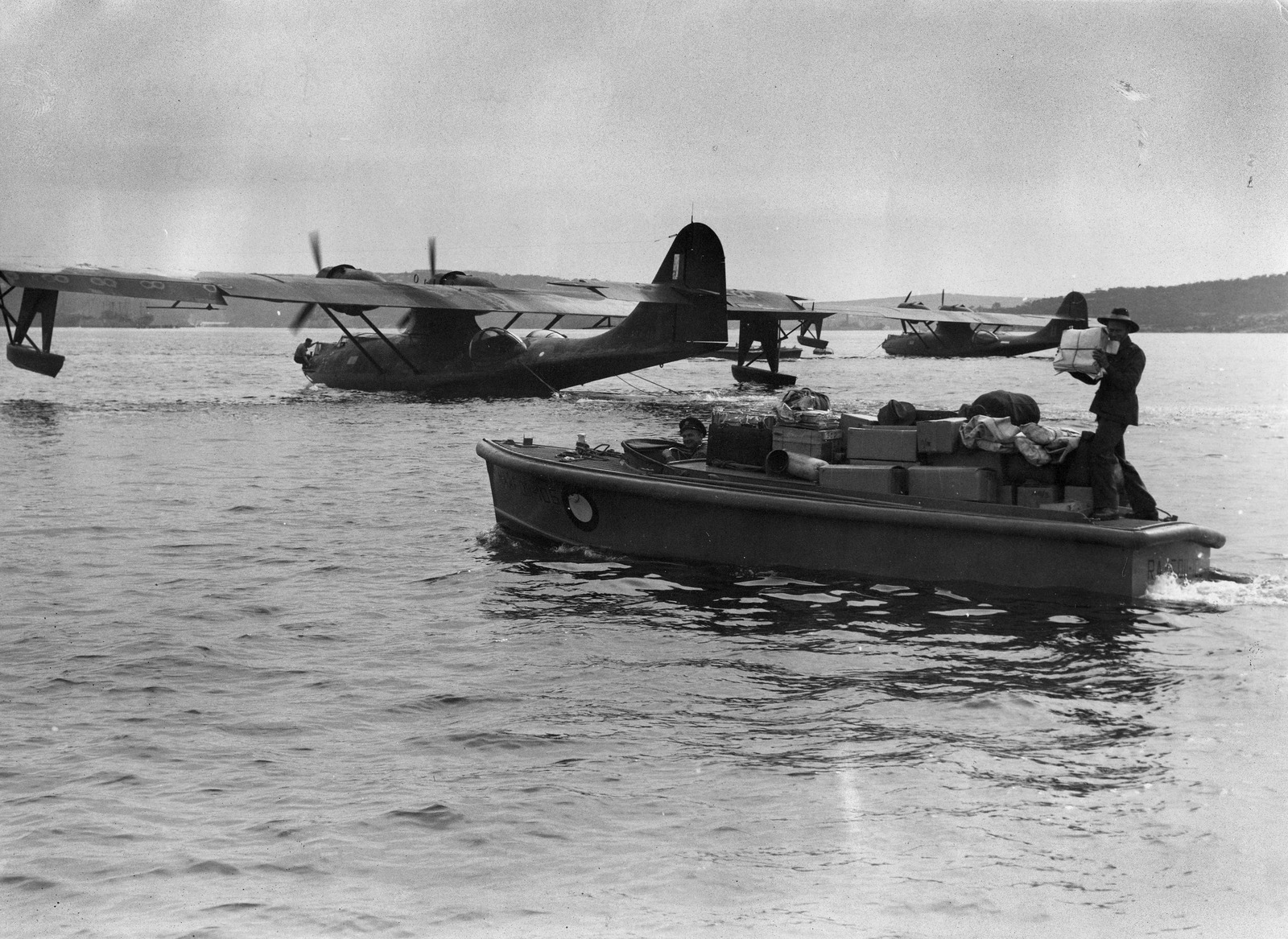 An RAAF launch with medical equipment and stores heading for a Catalina at Rose Bay which will fly to Singapore for Australian ex-prisoners of war. Argus Newspaper Collection of Photographs, State Library of Victoria H98.103/3845

Since July 1938, flying boats had been alighting on and taking off from the waters of Rose Bay. Those first flights connected Sydney to Singapore for £195, and Rose Bay became Australia's first international airport. By the time of World War 2, the airways were shared between the private and military sectors. Flying boats used in a variety of operational roles by the Royal Australian Air Force and other Allied nations. After the war the use of flying boats for military and commercial operations declined as the war had brought with it new airports and aviation technology. The service ceased operations in Rose Bay in 1974.

Flying boats were a luxurious and extremely modern way for about 15 people to travel. They paired adventure with novelty, especially in the interwar years. There were several different spaces within a flying boat that allowed the journey to be as enjoyable as the destination. The main cabin and smoking cabin had reclining seats. Staff treated the passengers to an in-flight service, one cabin crew for each 5 passengers. Overnight stays were spent at luxurious resorts. The alighting requirements, to float on water and keep propellers well above the water, allowed for an oversized interior that enabled passengers to be surrounded by luxury.

Getting up out of his chair, a passenger could walk about and, if he had been seated in the main cabin, stroll along to the smoking cabin for a smoke, stopping on the way at the promenade deck with its high handrail and windows at eye level to gaze at the world of cloud and sky outside, and the countryside or sea slipping away below at a steady 150mph.

The ability of flying boats to alight on calm waters was a great advantage. Prior to World War 2, the world lacked many airports and early aircraft frequently needed to land to refuel. Journeys across Australia or internationally became feasible. Designed to carry mail, these aircraft had a swollen fuselage that floated. A letter could get from Rose Bay to Southampton in only 10 days, a quarter of the time it would take to get there by sea. In comparison to land-based airplanes prior to World War 2, flying boats had larger capacity and were faster.

The harbourside suburb of Rose Bay was selected as the site for Australia’s first international airport, primarily because it was a large bay with calm water located close to the city. 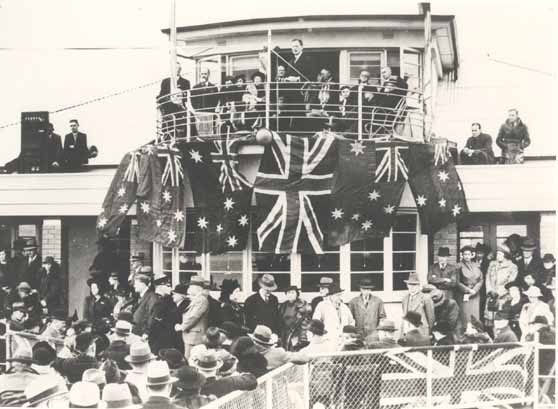 The Rose Bay Flying Boat Base was established on the northern half of Lyne Park. The first flight was by COOEE - VH-ABF on 5 July, 1938. The last commercial flight was on 10 September, 1974. Subsequently, the base was dismantled and the area reverted to public park. 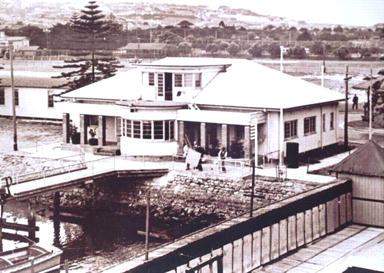 Boats flew out of Rose Bay to a variety of destinations and Rose Bay was the Australian terminus for the Empire Air Mail Scheme - the idea of having mail delivered within the British Empire by air had been conceived by the chairman of Imperial Airways, Sir Eric Geddes. In the 1930s, the Empire flying boats were concentrated on mail deliveries between Australia and England with only a dozen or so passengers tagging along on each flight that could carry up to 2 tons of freight.

Rose Bay to Southampton was the primary route, through Singapore and Bangkok, Calcutta, Alexandria and Marseilles. This path was nicknamed the “Kangaroo Route” as flying boats hopped from location to location, refueling as needed.3 The first boat that alighted in Rose Bay came from the Rochester Seaplane Works in the United Kingdom. The Short Brothers were responsible for early crafts and had the motto “We don’t build planes that float, we build ships that fly.”4 Qantas Empire Airways flew part of the way and Imperial Airways flew the rest. By 1939, war was looming and an alternative route to Europe through Africa was flown.

On 24 May, 1941, after four months abroad including in the Middle East, Britain, Canada and the United States, Australian Prime Minister Menzies arrived in Rose Bay by flying boat, where he gave a broadcast outlining the seriousness of the situation in Europe, and it's impact on Australia.

The war has assumed a most deadly and grave character, and it's winning will ask more of us than anybody dreamed of two years ago. 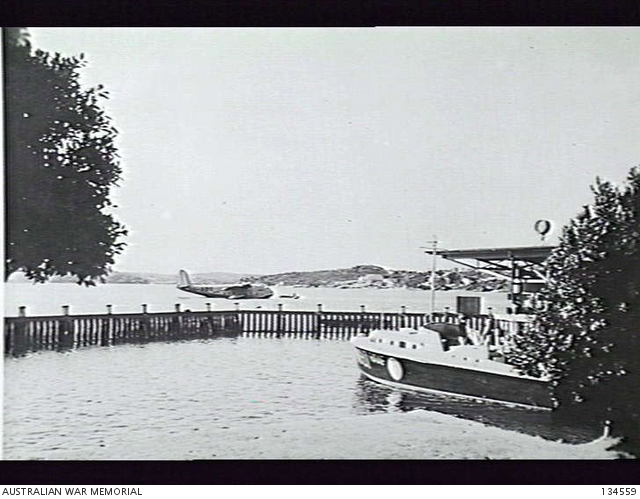 At War in the "Black Cats"

Like most Allied nations, the Royal Australian Air Force (RAAF) operated a number of different flying boats. For the first couple of years of World War 2, they flew reconnaissance missions and as patrol across Australia and Papua New Guinea in Empire flying boats. Some private aircraft (C Class Empire flying boats) were transferred to the RAAF at the beginning of the war from private companies.

Over 150 Catalinas were used by Australia during World War 2 between 1941 and 1945, being the only aircraft that could reach Japan and other islands in the Pacific. Catalinas had a remarkable range of 5,000 km flying below 5,000 feet.

With their range and reliability, the RAAF used these crafts in a variety of offensive ways. Flying boats regularly ran air-sea rescue missions and patrols. With their versatility, they could bomb and lay mines over water targets or near the shore, and went into battle against submarines. They flew at low altitudes and military pilots often flew them at night.

In December 2019, the Australian War Memorial’s “Catalina Week” exhibition paid tribute to the ‘one of the RAAF’s most important – but often forgotten – aircraft types, the aircrew who flew them and the ground personnel who maintained and prepared them’.

Originally purchased as patrol and maritime reconnaissance aircraft for Australian and New Guinean waters, by mid-1942, RAAF Catalinas were pressed into service as long-range bombers. They were the only available aircraft capable of reaching distant Japanese airfields and bases in New Guinea and the islands, often flying 18 hours or more on hazardous missions at low altitude to reach their targets. Since these operations were mostly carried out at night, the aircraft involved were painted in dark colours and became known as “black cats”. The long-ranging black cats with their motto “First and furthest” became part of RAAF legend.

Flying boats and their crew helped evacuate servicemen and civilians from places like the East Indies. Over 170 airmen died during Catalina missions as members of the RAAF 11, 20, 42 & 43 squadrons.

One example of the importance of these vessels was seen the night before the Battle of Ceylon. On 5 April 1942, a lone Catalina spotted a Japanese fleet of ships and reported it to allied forces before being shot down. The surprise element was taken from the battle and although the Japanese considered Ceylon to be a victory, it was the first formidable stance taken against that fleet.7

... we were saved from this disaster by an airman on reconnaissance who spotted the Japanese fleet and, though shot down, was able to get a message through to Ceylon which allowed the defending forces there to prepare for the approaching assault; otherwise they would have been taken by surprise.

Towards the end of the war, a flying boat was used in support of fund raising through the 3rd Victory Loan8 - eligible subscribers (£100 or more) were given the opportunity to participate in a 'joy flight' from the Rose Bay flying boat base. 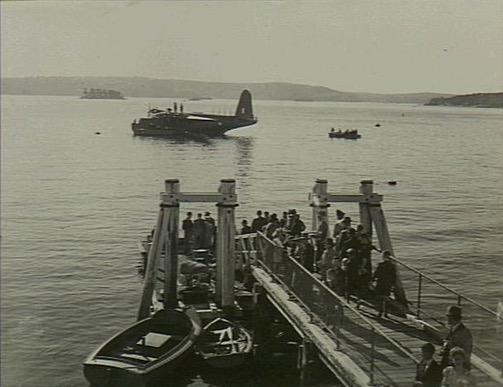 A group of civilians on the wharf at the flying boat base at Rose Bay, waiting to be ferried out to the Short Sunderland aircraft (in background) for a joy-flight. The aircraft, captained by Flight Lieutenant Manger was making a tour of Australian states in support of the 3rd Victory Loan and, during each stop on the tour, took eligible subscribers of 100 pounds or more to the loan, for a joy-flight. 31 May 1945. Image: Australian War Memorial VIC1263 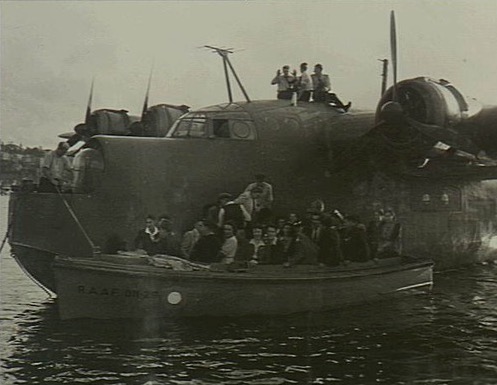 Civilians leaving the Short Sunderland aircraft and boarding a RAAF launch (RAAF 011-29) to be ferried back to the wharf at the Rose Bay flying boat base after being taken for a joy-flight. 31 May 1945. Australian War Memorial VIC1264

Boats left Rose Bay for Singapore and some domestic locations even after the declaration of war in 1939, but by February 1942, Japan occupied most of South East Asia and the service to Singapore was forced to stop. The facilities at Rose Bay were used as an RAAF base where technicians repaired and overhauled allied vessels.

Qantas also kept open the only Australian civilian air link across the Indian Ocean using the Liberator and Catalina models. The Qantas Liberators were the first planes that had a painted 'flying kangaroo' symbol. Airmail continued to move from Perth to Ceylon (Sri Lanka).9

In 1943 the RAF sent five Catalina aircraft to Qantas on the condition that they open a route from Perth to Ceylon. As the world’s longest and regular non- stop service for 271 flights, it covered over 5600 km. Airmail was copied onto microfilm, and the flying boats stripped of any unnecessary weight. Limited crew flew the missions in complete radio silence navigating with only a map, compass and the stars. The service lasted for two years and around 800 passengers witnessed two sunrises during the trip. Upon arrival, they obtained a certificate to the ‘Secret Order of the Double Sunrise.’

The end of the war

On 16 September 1945, nine Catalina boats cruised into Rose bay with former prisoners-of-war from Japanese camps at Changi, receiving a warm welcome from the public. Catalinas also flew to Singapore with stores and medical equipment for Australian ex-prisoners of war. 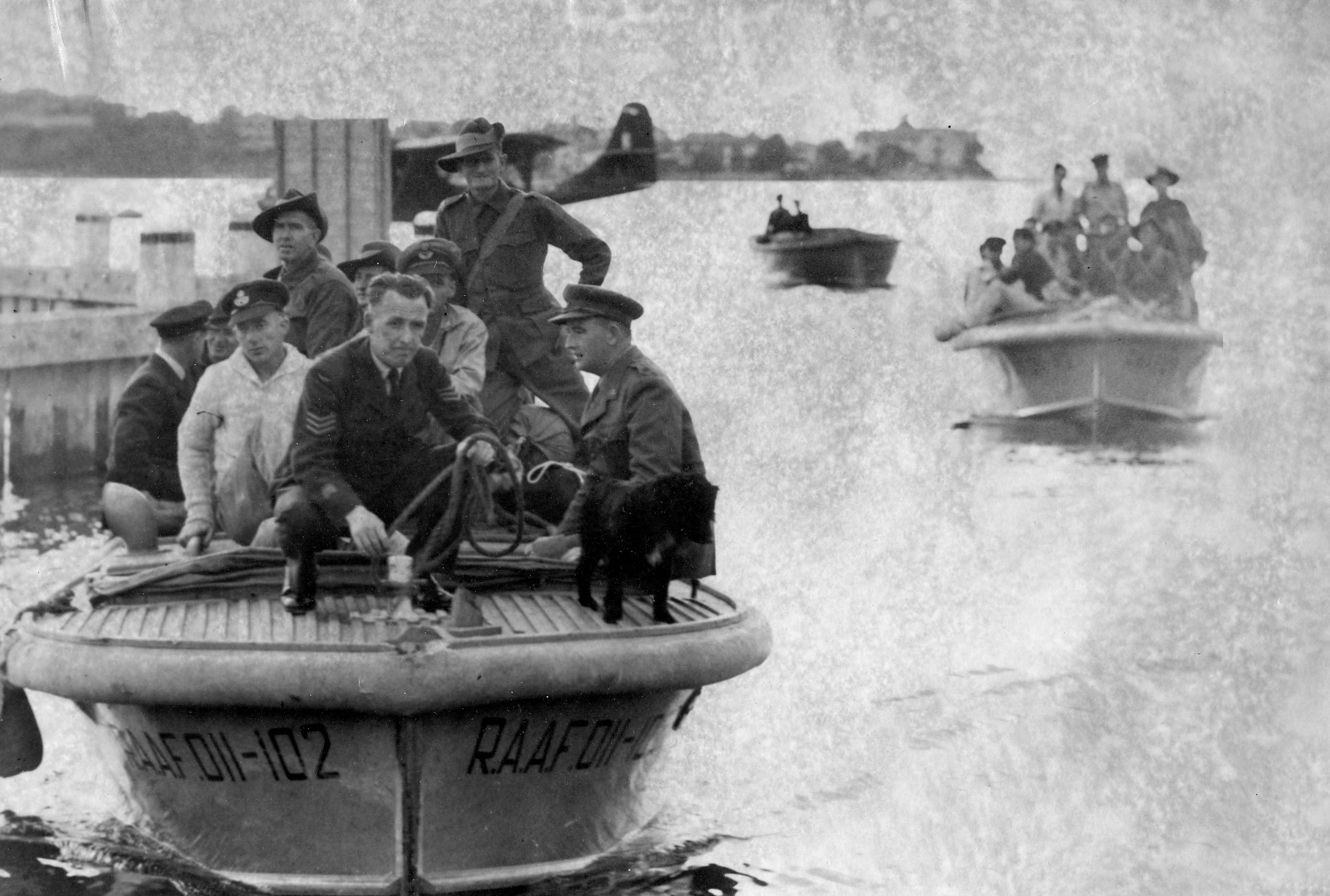 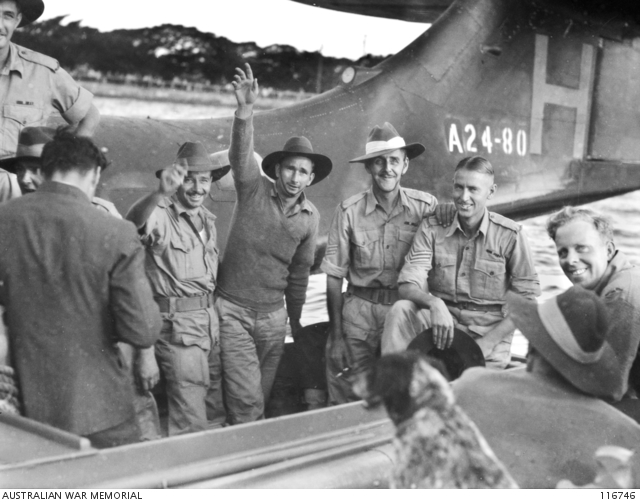 Members of 8th Division, Ex-Prisoners of War of the Japanese at Changi, arrived at Rose Bay Flying Boat Base by Catalina Aircraft. Shown, a group of the ex-prisoners in the RAAF launch ready to go ashore. 24 September 1945. Australian War Memorial, 116746. 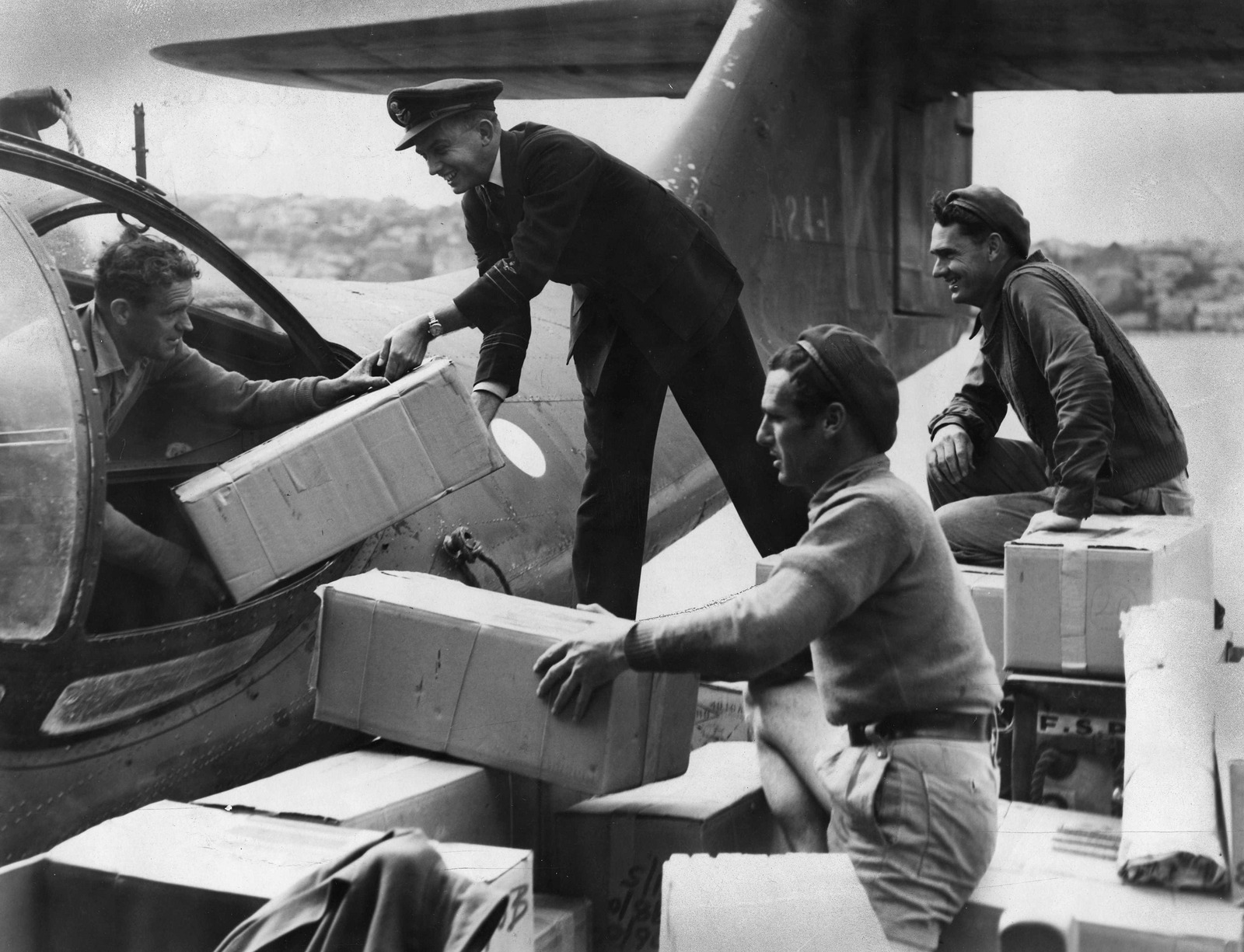 Men loading a No. 1 Flying boat, ready to fly to Singapore with stores and medical equipment for Australian ex-prisoners of war. Argus Newspaper Collection of Photographs, State Library of Victoria c1945 H98.103/3846

After the war, flying boats rapidly became obsolete. Thousands of airports were built across the globe during and after the war, providing the facilities for new pressurised aircraft that could fly higher and farther. Flying boat flights to London resumed in May of 1946, but in 1955 Qantas discontinued its flying boats, selling all remaining craft to Ansett flying Boat Services, Rose Bay.

The flying boat hangars were dismantled in 1977 and the area reverted to public park. 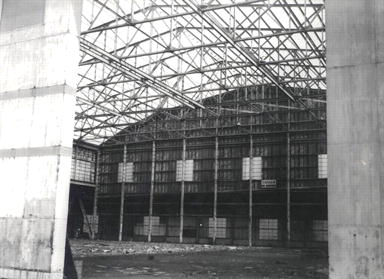 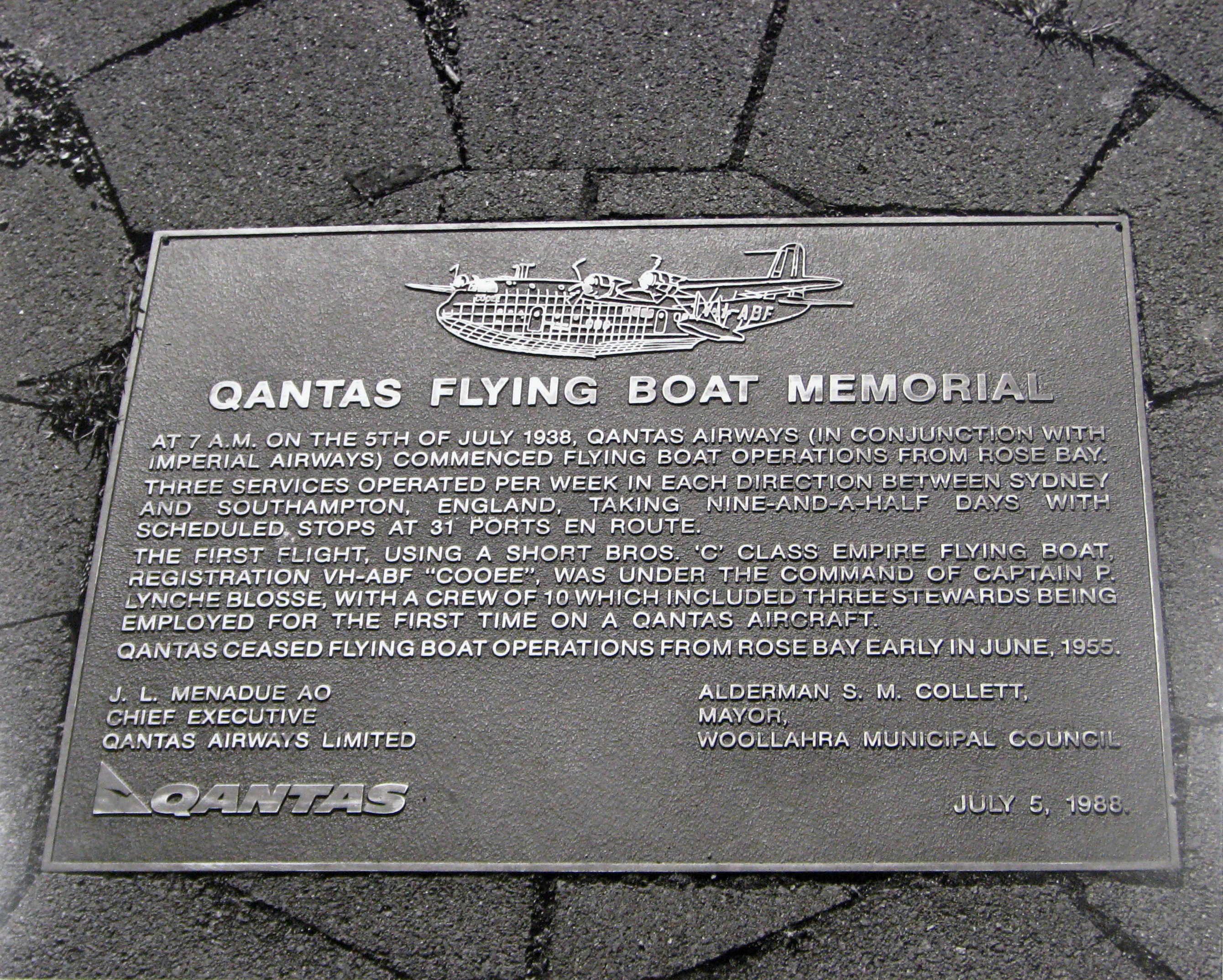