Australia, by declaration, entered the conflict now known as World War 2 on 3 September 1939 – on the same day, and in unity with, Great Britain. Together with New Zealand, Australia was one of only two non-European nations to enter the war from its outset, and both countries remained actively involved when the documents of formal surrender were signed on 2 September 1945 - one day short of six long years of conflict.

“Fellow Australians, it is my melancholy duty to inform you officially, that in consequence of a persistence by Germany in her invasion of Poland, Great Britain has declared war upon her and that, as a result, Australia is also at war. No harder task can fall to the lot of a democratic leader than to make such an announcement.”

Twenty-one years after the Allied victory of 1918, the Australian people found themselves again confronting the prospect of war. The six-year war which engaged Australia between 1939 and 1945 delivered a very different experience from its 1914-1918 precursor. On the home front it was in every sense a more intrusive event, with one exception: the death toll among serving Australians was significantly less, reducing the number of families destined to suffer the emotional and material impact of war-time bereavement.i This outcome, of course, could not have been predicted by those who faced anxious years of waiting for the safe return of family members, and nor does it recognise the suffering of those returnees, and their families, whose futures were dogged by war-induced trauma or physical disability.

War toll aside, what most distinguished the two conflicts was the fact that Australia, through the second part of World War II, could no longer trust in geographical separation to safeguard the nation. From December 1941, Australia lay on the edge of an active theatre of war, with Australian external territories soon undeniably within the area of operations, and Great Britain in no position to exercise the protective function expected by its southerly dominions. It would be a slow awakening, however, before Australians reached a clear appreciation of their country’s predicament, and the Australian government waged its own war on the home front to combat complacency.

The initial stages – and life went on

In September 1939, within the Woollahra community, local sentiment and understanding of the war-time situation mirrored the public attitude in Australia as a whole.  Bruce Crosson – a Rose Bay teenager when war broke out - notes in his essay ‘The War and Woollahra,’

"Changes were mostly marginal, and life went on without a great deal of concern for the conflict half a world away"

It was different in official circles. Even before the inaugural meeting of the Australian War cabinet, held on 27 September 1939 at Victoria Barracks in Paddington, much had happened in the bare month since the declaration. Australian naval and air forces had swiftly mobilised for overseas service. The raising and equipping of ground forces, and the question of their most useful deployment was in active planning, in consultation with Britain. At this level of operation, the possibility of Japan entering the war and threatening the further reaches of British interests was already factored into the myriad considerations for best allocating Commonwealth resources.

Amongst its earliest actions, the Australian government introduced legislation designed to strengthen its authority for war time circumstances.ii Pilloried by opponents as an act enabling the Government ‘to pass any laws it liked and disregard existing laws’iii – the National Security Act granted the government the means to introduce the many restrictions and requirements imposed upon the Australian populous as the war situation deteriorated, and which would come to shape life at home.

A growing threat in the Pacific

Apart from evidence of Japan’s increasing military strength, there were multiple indicators to be drawn from Japanese foreign relations over the 1930s to justify Allied wariness. Prime among these were the occupation of Manchuria in 1931, and Japan’s withdrawal from the League of Nations in 1933 – the latter pre-dating Nazi Germany’s detachment from the organisation.

On 27 September 1940, Japan became a signatory to the former ‘Pact of Steel’ between Germany and Italy, re-drafted as the Tripartite Pact. The arrangement redefined the Axis alliance and provided for mutual assistance should any one of its signatories come under attack by a power not already engaged in the war. During the period leading up to this, Japan had been exercising what has been described as her ‘peaceful penetration’ of south-east Asiaiv, establishing strategic bases by agreement with compliant authorities, rather than through combat.

While Allied and American intelligence-gathering forewarned of the likelihood of Japanese aggression, the events of 7 December 1941 took the world, and Australia, by storm. While the date is remembered in the main for the surprise attack on Pearl Harbour, which brought the formerly neutral America into the war, it also marks the first Japanese bombardment of the strategically vital Allied naval base on Midway, and the beginning of an assault on Hong Kong which led to the surrender of the British colony in less than a fortnight. The following day saw the Japanese invasion of Thailand and the beginning of campaigns against the British-held territories of Malaya and Singapore, the American stronghold of The Philippines, and the Dutch East Indies (Indonesia).

Thus in two days, the Japanese initiated the removal of the Allied-held buffers which had stood between the Australian home-front and direct exposure. This was accomplished in a matter of weeks.

Placed on a ‘real wartime footing’

“The events of Sunday, December 7, 1941 changed things a lot – the community was hurriedly put on a real wartime footing”

Driven by a new urgency, the war became the primary focus of government purpose. The provisions of the National Security Act were now drawn upon to create, over time, a myriad of regulations to enforce the observation of necessary precautions, such as the ‘black-out’ conditions designed to hinder enemy aircraft and submarines from sighting their targets.

Conscription had been avoided in Australia during World War 1, due to the opposition of the people (expressed through two unsuccessful War referenda on the subject) coupled with the government’s reluctance to introduce the measure without popular support. Now, with her fighting force abroad, and an enemy progressing with alarming speed southwards, conscription was introduced without public consultation. The terms of compulsory service extended to deployment anywhere within the defined ‘south-west Pacific zone’:Australia, New Guinea, the Philippines, and the Netherlands East Indies.

Non-conscripted members of the workforce were subject to labour controls to combat the shortage of man power, removing the choice which Australian workers were accustomed to exercising over their employment.

In time, both public and private property was sacrificed to the war need, and large houses came to accommodate servicemen, pleasure craft were taken to form the ‘Hollywood Fleet’ patrolling harbours and ports, and public parks and facilities fell victim to military need above public enjoyment. Authorities meanwhile exerted control through a system of rationing over the purchase and sale of necessities better used in the cause of the war effort than by individuals.

"I ask you to reconcile yourselves to a season of austerity, to make your habits of life conform to those of the fighting forces."

Hasluck, Paul. The government and the peoplep270

Whereas rationing measures concentrated on apportioning necessities, austerity measures targeted expenditure on the unnecessary - extravagances such as entertainment, alcohol, and luxury goods. Curtin’s strategy was to adjust the national frame of mind to fit the hour.

There were physical changes taking place in the local area, too which served as reminders of the new reality. Air raid shelters were added to private gardens and public places – some were pre-fabricated structures sold for installation below ground level, while other provisions were little more than trenches, but all shared the same disadvantage of filling with water after rain. A shelter dug in Robertson Park Watsons Bay by the Vaucluse Council was particularly disadvantaged in this regard, having been built over ‘a prominent spring’, according to local resident Vince Marinato.

"Some six feet deep and four feet wide it ran along half the length of Military Road alongside the pub and it was shaped like a number of large joining ‘Ws’."

Marinato, Vincent The Shop on the wharf p. 96

In his reminiscences, Marinato goes on to relate that the air raid shelter proved a hazard to locals leaving Watsons Bay pub after dark, a number of whom forgot its existence and ended up at the bottom of the trench. It was a relief to the community when it was filled in.

In preparation for explosions, shop display windows were boarded up and domestic windows criss-crossed with adhesive tape to limit the danger of flying shards of shattered glass. Sand bags were used to reinforce walls and dampen the force if struck by bombardment, and sand was also distributed for use as a fire retardant in the event of incendiary bombs. 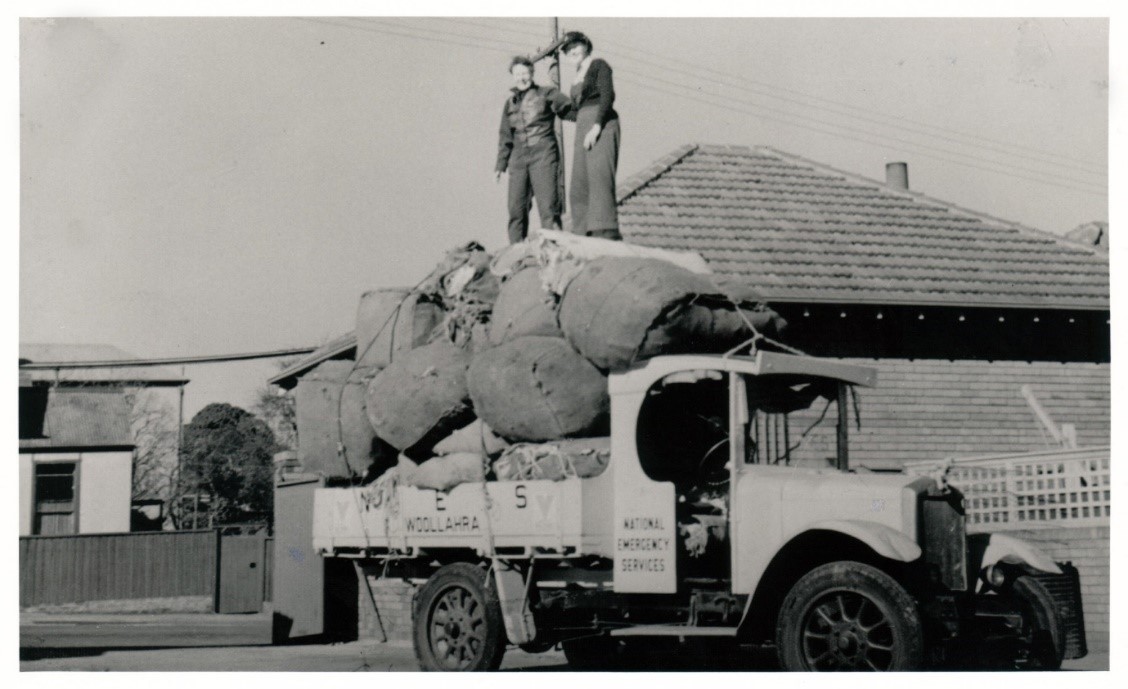 Historian Paul Hasluck observed of all these visible precautions,

Gradually too, as the realisation of danger grew, the aspect of the cities changed ... Not only in the headlines but in the highways and byways could be read the story of expectation of coming raids, and perhaps invasion.

Hasluck, Paul The government and the peoplep. 64

The entry of Japan into the war in 1942 introduced a real threat to civilian lives, homes and livelihoods, with the fear of enemy invasion and the unwelcome prospect of engagement on Australian soil. In the course of everyday civilian life, a new sense of vulnerability tempered, but did not overwhelm, the famously relaxed national attitude.

Vince Marinato, in summing up this period of his life, wrote:“

"Thinking back on those times and all that has been said and written, it was an age of pride, comradeship and a sense of a job well done. With all its sadness and laughter one feels that to have missed out on being part of it would have left a huge gap in one’s life"

As I remember : recollections of World War II by members of the Woollahra History and Heritage Society and the Eastern suburbs division of the Legacy Club of Sydney. Syd., WHHS, 1995

Hasluck, Paul The government and the people Canb., AWM, 1970

Marinato, Vincent The Shop on the wharf : recollections of people and happenings in Watsons Bay during the first seven decades of the twentieth century. Syd., Wild & Woolley, 1996

i In terms of Australian war-time losses, deaths of servicemen in World War I stands at 60,000 from the AIF alone, while in WWII deaths across all services stands at 35,000. ABS - War Casualties . For Japan, Germany the Soviet Union and the Jewish people the losses in WWII were, however, tragically high.

v Curtin had assumed the position of Prime Minister on 7 October 1941 and remained in the role until his death in 1945.