World War 2 brought conflict closer to home, and residents of the Woollahra municipality had many reminders that the country was officially at war.

Starting with the following articles, this section will be updated regularly with new topics relating to World War 2 as it was experienced in Woollahra, including the operation of the Flying Boat Base at Rose Bay, requisitioning of  grand homes of the municipality for military use, fund raising efforts, repatriation, and the impact the war had on our longest border - Sydney Harbour. 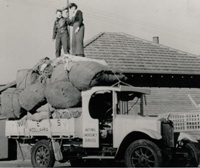 Australia, by declaration, entered the conflict now known as World War 2 on 3 September 1939 – on the same day, and in unity with, Great Britain.

The shelling of the Eastern Suburbs

"I feel it is my duty to report that history was made last night when Woollahra was shelled from the sea. The defence authorities report that the shelling was carried out by submarine" (Mayor of Woollahra, Mayoral Minute, 8 June 1942). 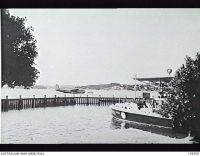 In 1942, the airport at Lyne Park, Rose Bay, became an operational RAAF base for the maintenance and repair of flying boats for the Allies. Image: Crash Launch RAAF 08-97 at its mooring, Rose Bay. AWM C255381