With a century separating us from the Great War, today's Australians know its stories second-hand at best. Snippets of remembered family lore, and hoarded documents, now pass as substitutes for the conversations I failed to hold with an ex-AIF grandfather.

Service records also help to fill the vacuum. Documenting a man's wartime years in bald, unrestricted detail, the military archive authenticates or debunks family legend - and sometimes, uncovers surprises. Who'd have thought my great-uncle's fatal nephritis was less a consequence of his wounds than the mercury treatment used against his recurrent syphilis?

If my grandfather's war included guilty secrets, they haven't surfaced. His furlough pleasure was sight-seeing, and picture-postcards his indulgence, neatly pasted in albums recording surely every place he visited. "I am enjoying a few days in London – such grand sights" he wrote to his mother, Christmas 1916. "Though we are thousands of miles apart today, the time may not be long before we see each other again, and I will do my part like a man whatever happens."

Four months later he advised his younger brother impassively, "I will be in the trenches perhaps by the next letter you receive". Mentioning his return, he added cautiously, "if I'm spared".

My grandfather was part of the AIF's 33rd battalion, a famous unit mentioned several times by Bean. Alas, he could boast no part in its heroics. Ordered to deliver supplies down the lines, he dismissed the safe route for a short-cut across open ground. It was his first and last day in action.

Shot in the back, he would endure years of good-natured ribbing from brothers-in-law (fellow AIF) for bearing the deserter's stigma. Apart from this humour, the sniper's bullet was no laughing matter, its complicated trajectory doing enormous damage to thorax and abdomen. For decades he battled the physical consequences of his recklessness before the problems were gradually brought under control.

"Sewn up to die", was his Australian GP's assessment, based on the untidy stitching which had followed hasty field-hospital repairs. The official description, recorded at discharge by army medical personnel, refers to sutures three-inches long. The same examination deemed him incapable of earning a livelihood.

Despite this prognosis, my grandfather accepted a soldier's settlement property and actively worked the land until almost 70, spending his final years almost as energetically in the 1 hectare garden he nurtured in retirement. His wounds finally caught up with him at 80, when he died of a related cause. Until then, he never lost the will to "make the best of things" that he'd shown as a 24 year-old "incidental tourist" in the Europe of 1916-17. 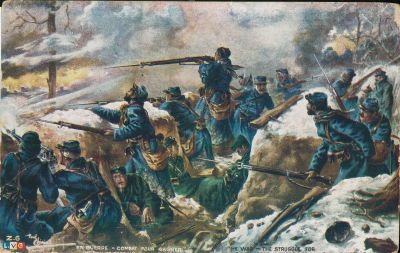 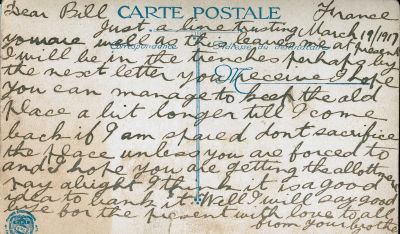