Feminist and social reformer, Rose Scott was instrumental in securing women's right to vote in Australia, as well as engineering many other social reforms for women and children.

Rose Scott was born on 8 October 1847 at Glendon, near Singleton, NSW. Rose was one of eight children born to parents Helenus, pastoralist and police magistrate, and Sarah Ann (nee Rusden), linguist and scholar, Scott. While their brothers attended boarding school, Rose and her sister Augusta were educated at home by their mother. Rose, a celebrated beauty, made regular visits to Sydney and despite family expectations she never married.

Rose's father died in 1879 leaving Rose to care for her mother who was in poor health. When Augusta died the following year Rose adopted Augusta's son, Hope Helenus, and moved the family to Sydney.

Rose settled in Paddington becoming a popular figure in social and intellectual circles and entertaining many influential and noteworthy people at her home Lynton, at 294 Jersey Road (then Point Piper Road). These gatherings would continue throughout her life, with Rose establishing a tradition of Friday night ‘at homes' and Saturday afternoon visits in her garden. Various members of Rose's family also stayed (sometimes for extended periods) with her at Lynton. The house backed onto Trumper Park and the garden was one of Rose's great loves. 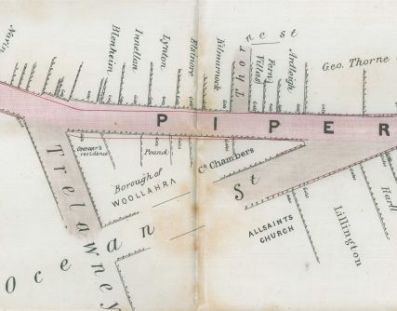 Lynton was part of the Edgecliff Glebe, land administered by the Church of England and offered as 99 year leases. With the expiration of the leases in 1964 the administrator of the land, the Glebe Administration Board, made various development proposals for the Glebe. Rose's house became one of those demolished to make way for an aged care development, which opened as the Goodwin Village in 1970.

Rose Scott was dedicated to working for the advancement of women and was one of the key figures in the movement committed to universal suffrage. In 1889 she was a founding member of the Women's Literary Society and it was from this society that the Womanhood Suffrage League was formed in 1891. Rose was foundation secretary of the League and used her social network and skills as a lobbyist to work for franchise. She survived internal conflicts and disagreements over policies within the League, her tenacity over policy sometimes causing friction with other members. As described by Maybanke Anderson after Rose's death "very few who knew Rose Scott could forget her. Perfectly feminine as she was, with an attractive charm of manner and sweetness of expression, she yet often saw to the bottom of a question with masculine directness, and held on to her opinion with childlike tenacity. She believed implicitly in the power of persuasion--her persuasion--but she was a different person to persuade, and to divert her from her purpose was almost impossible" (Sydney Morning Herald, 2 May 1925, p.9).

After Rose's mother died in 1896 she concentrated her efforts on securing women's suffrage as well as working for other social reforms such as the early closing movement for shops and factories (the 1899 Act was reportedly drafted on her dining table). She was foundation member of the National Council of Women of NSW in 1896 and was international secretary and convenor of its legal committee from 1904. Rose was also president of a women's committee of the Prisoner's Aid Association in 1898 and advocated the establishment of a separate prison for women and other reforms. In 1901 she organised, with Harry Holland, the Tailoresses' Union of NSW.

With the granting of women's right to vote in 1902, Rose became the first president of the Women's Political Educational League founded with the purpose of organising the education of women in the use of the vote.

Rose continued working on feminist issues after franchise was achieved. Her campaigns involved setting up committees, holding public meetings, giving presentations, writing numerous papers and letters to newspapers, and corresponding with and lobbying politicians and other influential members of society. She fought for fairer laws governing women and children including raising the age of consent for girls from 14 to 16 (achieved in 1910), securing child maintenance and the establishment of a children's court. Her support of the Women's Legal Status Act (1918) and First Offenders' (Women) Act (1919) ensured that women could practice law, stand for local and state government, and become magistrates and justices of the peace (though not jurors).

The range of Rose's interests and causes was immense. She was an advocate of cremation and a founder of the NSW Crematorium Society, president of the NSW Ladies' Amateur Swimming Association, involved in the establishment of the Women's College at Sydney University and was a founding member of the Women's Club.

A pacifist, Rose opposed Australia's involvement in the Boer War and supported international arbitration. She became president of the Sydney branch of the Peace Society in 1908 and was against any involvement in the First World War.

Increasing ill health led to a reduction in Rose's work load and her eventual retirement from public life in 1922. At a luncheon given in her honour by the Feminist Club in 1921 Rose gave the following advice to those carrying on her work and which was an indication of her own approach: "Avoid distinctions of class and creed, party politics, and squabbles with men. Such things limit one's outlook and dim one's vision. Learn to distinguish between the good and the evil in every reform, and remember woman's cause is man's. Never descend to personal abuse. Be sure of your facts, and remember that every cause demands patience and self sacrifice. And, above all, be loyal to your sex" (SMH 22 April, 1925, p.14).

Rose died at her home on 20 April 1925 and her body was cremated at the Rookwood crematorium on 26 August.

In 1921 Rose established a prize for women law students at Sydney University. Her portrait, painted by John Longstaff, was organised in 1922 by friends of Rose to commemorate her services to the women's movement. The portrait was then donated to the Art Gallery of NSW (SMH 23 Sept 1922, p.12).

Rose Scott devoted her life to the cause of the advancement of women in society, working tirelessly to achieve improvements in the rights and conditions of women in Australia. Scott was a central figure in the history of feminist thought, she played a pivotal role in the achievement of franchise and was a pioneer of the women's movement. She was a charming and determined personality and resolute in her commitment to her many causes and social reforms.

The Australian Women's Register describe Rose as "one of the most important figures of her time". Maybanke Anderson summed up her legacy in 1925: "A young woman, active, intelligent, and not on the whole ignorant, said a little while ago with some surprise, "'Who was Rose Scott? What did she do?" One might have answered, "Look around." For the woman of today owes what she possesses of the status of a citizen to the pioneer women, and Rose Scott was a notable pioneer" (SMH, 2 May 1925, p.9).