Timeline of significant events in the South Head region

The South Head area, including Watsons Bay and Camp Cove, once the traditional land of the Birrabirragal, has close ties also to the earliest days of European settlement. The locality has long been recognised as a place of outstanding natural beauty at the gateway to Sydney Harbour. The historical significance of this area was acknowledged by Woollahra Council in 1995 and gazetted as a Heritage Conservation Area.

In 2008 a commemorative plaque was installed at Cliff Street, Camp Cove, featuring a timeline of significant events in the history of the Camp Cove locality. Further information on the history of the South Head area has been complied below from the collection at the Local History Centre.

220 million years ago, Hawkesbury River sandstone forms from accumulated layers of sediment, bedded at the delta of a wide, swiftly flowing river. The cliffs of the South Head consist of horizontal bedding layers of this sandstone, made up of quartz material carried from mountains of an earlier geological age located to the south-west of present-day Sydney. The quartz, bound together with clay and other ‘cementing’ materials, forms a resistant mass. Good examples of this ‘bedding’ formation can be seen in the cliff face at Cliff Street, Watsons Bay, opposite the Short Street intersection.[1]

160 million years ago, volcanic activity subjects the sandstone coastline to explosive pressures, the ultimate results of which may be seen today in various ‘Chines’ or chasms - such as the spectacular 2 metre-wide cleft in the South Head cliff-line known as Jacobs Ladder. Immense heat and pressure is generated, the force of which parts the sandstone strata along its natural joint lines, creating a fissure which is then filled by molten igneous material – largely basalt. Subsequently, this volcanic ‘infill’ (dyke) has eroded at a faster rate than its sandstone surrounds, leaving dramatic clefts in the cliff face.[2] 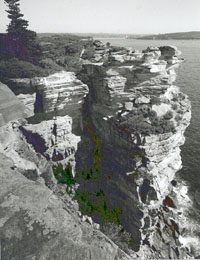 1 million years ago, an ice-age river, flowing 60 - 85 metres below the present sea-level, cuts through the uplifted coastal sandstone to bedrock.[3] Watercourses feeding the river cut deep valleys, subsequently filled by sand and mud, forming in their wake the beginnings of beaches and lagoons.[4]

130,000 years ago, inter-glacial warming causes the sea-level to rise some 6 metres above present levels. The South Head region becomes an island, separated by water from higher land to the west. Rock platforms are created around the harbour shoreline and ocean cliff-frontage from wave action during this period.[5]

20,000 years ago, during the last ice-age period, Port Jackson, now inhabited by early indigenous peoples, is an arid and rocky valley incised by freshwater streams.

8,000 years ago, the sea rises to its present level, and beaches and lagoons take on their present natural forms prior to European engineering intervention such as the piping of natural watercourses through storm-water systems. The land encompassed by the South Head region supports communities of Eora-speaking peoples of the Dharug language group. At the time of European settlement the Birrabirragal were based along the harbour shoreline of Vaucluse and Watsons Bay. Evidence of this early occupation remains today in the form of rock carvings and shell middens.[6]

Captain Arthur Phillip, first governor of New South Wales, in a letter to Lord Sydney, May 1788.[1]

The importance of the South Head district in the earliest years of European settlement is defined by its position at the gateway to the harbour and its role as a navigational landmark. 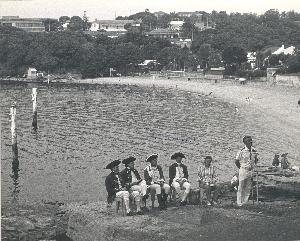 The origins of a settlement are laid down in the South Head, Watsons Bay and Camp Cove area during this decade, and the first grant of land issued.

A maritime community begins to form, based at first on the embryonic pilot service.

The construction of Australia’s first lighthouse creates a symbol with which the South Head is associated still, and the introduction of a rudimentary road creates an important new means of access from the main settlement at Sydney.

The strategic importance of the district is acknowledged in a new plan – not implemented for fifty years – to create a first line of defence for the colony at the entrance to the harbour.

As recognition of the military importance of the district increases, the first substantial houses are built, and the first attempt made to sell land for suburban development.

During the latter stages of the ensuing decade, Azorean seamen, mainly whalers, gravitate to Watsons Bay. Their settlement in the area adds a new cultural element - a Portuguese-speaking community which was to enrich the maritime and social history of the Bay.

During this decade the focus of the broader Sydney establishment is drawn towards the district. Overseas events make the defence of Sydney Harbour an urgent issue; the entrepreneurial interests and initiatives of Ralph Meyer Robey and Elias Carpenter Weekes are turned towards the tourist potential and land-development possibilities of Watsons Bay, and the focus of the colony is drawn upon South Head by the Dunbar disaster and the need disclosed by the tragedy for better navigational aids and procedures. Another substantial house, Zenleith, joins Zandvliet on the Watsons Bay waterfront, built by George Bainbridge and later the home of harbour pilot Robert Cork. 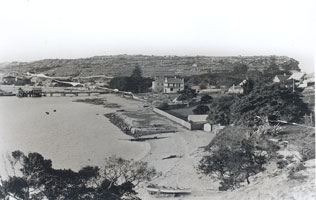 The Greenwich Pier Hotel, formerly the house 'Zandoliet (centre) with the house 'Zenleith' behind c.1905 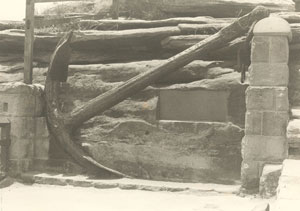 An anchor from the 'Dunbar', retrieved in 1910 and later made the centrepiece of the memorial at the Gap
Photograph Eric Russell 1979 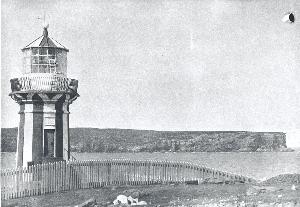 Changes to local maritime practice are introduced in the aftermath of the disasters of 1857. The newly established official lifeboat service carries out a number of rescues during this decade, and pilotage is brought under government control – an arrangement which eventually lapses. The community of the region continues to develop along maritime, tourist and military lines. Carvings visible in the sandstone rock face at Cliff Street are believed to date from this period, the work of the ‘butcher boat’ crews as they waited near the Camp Cove wharf to row out to meet incoming vessels. The butcher boats, which took orders on behalf of the local provedores, were yet another facet of the maritime history of Watsons Bay.

Tourist facilities are increased – both through private and government initiatives to make the area more attractive. The evolving fortifications become an added interest for sightseers. 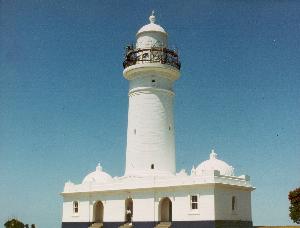 The establishment of a new local government area, with an administration based at Watsons Bay, is one demonstration of a number during this decade of the increased population and growing economy of the district. 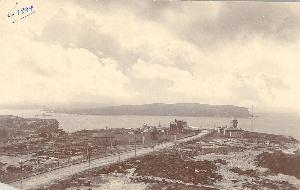 The turn of the century heralds vast improvements to the public transport serving the district, an essential precursor to the suburban development of the adjoining suburb of Vaucluse, and to the viability of the new borough supporting the South Head district. 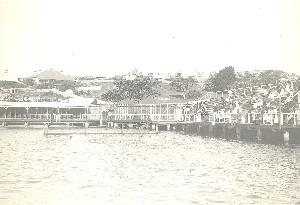 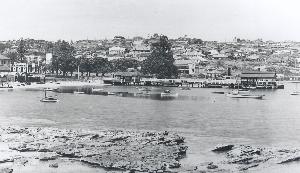 Postcard view of the Watsons Bay foreshores showing the Ozone Cafe (left), the Marinato's shop on the wharf (centre) and the ferry waiting room (right), date unknown
The Rose Series 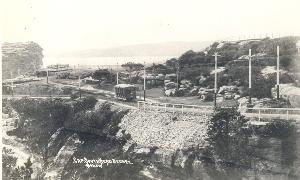 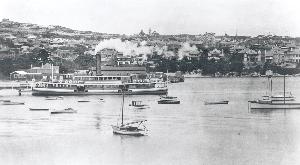 A number of locally important capital works are undertaken during the ensuing decade, in an atmosphere of post-war confidence.

The effects of the Great Depression of the early 1930s are felt in the local community. Businesses are forced to adapt.

The military character of the area is intensified during the war years. The wharf at Watsons Bay is extended to accommodate warships in increasing number. On Green (Laings) Point, an anti-motor torpedo boat section is built midway through the war, comprised of a reinforced concrete tower and having a gun-floor with 6-pounder twin quick-firer gun having a magazine below and observation post and searchlight-directing levels above. The building stood to the north-west side of Green Point, almost at water-level and was demolished after the war. This replaced the two 3-pounder quick-firer guns previously in situ. 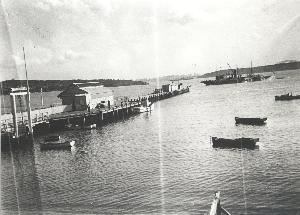 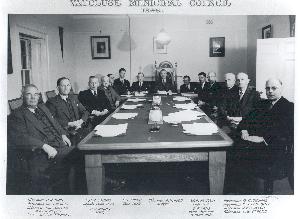 Meeting of the final council of the Municipality of Vaucluse, 1948

The postwar era brings change to the Watsons Bay waterfront. 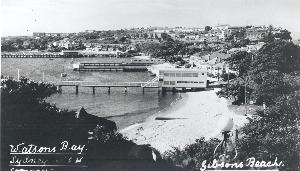 The social changes of this decade and its successor are manifested locally, with the use of Lady Jane Beach as a nudist swimming and sunbathing area gaining popularity among Sydneysiders.

This decade increases the district’s credentials as a tourist destination and place of leisure while the links to its earliest reasons for existence – strategic, navigational, military and maritime are weakened.

The character of the Watsons Bay area continues to evolve. Operational changes to long-standing government facilities, such as the Lighthouses and Signal Station, are part of the shifting focus. A community struggle to preserve within the public domain the open space associated with the now unmanned Macquarie Lighthouse is ignited by government ‘sell-off’ plans. The protest is carried across a number of years of this decade, with sale plans resurfacing at intervals. The former head lighthouse keeper's cottage and the assistant lighthouse keepers’ quarters on the site are offered on long-term (125 year) leases.

Gentrification of the housing stock sees the replacement of some 19th century timber cottages with larger residences. The Watsons Bay Heritage Conservation area is established in response to official recognition of the need to preserve the heritage of the area.

'A large fire for the information of the stranger was made at the South Head' (Captain David Collins). Youthful descendents of those who arrived aboard 'the stranger' - the transport Bellona - attend a bicentennial re-enactment on January 15, 1993. 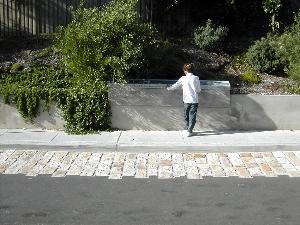