Thomas Wheaton Bowden was born in 1806 in England.  His parents Thomas Bowden (1778-1834) and Jane Wheaton (1778-1846) were married in c1805.  Thomas senior was a school teacher and master of the Great Queen Street Charity School, London, and upon recommendations was appointed the Master of the Public Charity School (also known as the Free School) in Sydney.

Thomas arrived in Sydney with his parents, sailing from England on the General Graham, on 28 January 1812.  The Bowden’s first home was in Princes Street, The Rocks. Thomas senior was appointed master of the Male Orphan School which he helped establish in 1819.

Thomas set up a business as an ironmonger, operating from a shop in George Street during the 1830s-1840s.  In 1847 Bowden advertised his opening of a ‘sugar works’ in Liverpool Street, offering purchasers ‘every description of refined sugar’.  Papers held at the Mitchell Library indicate that in 1850 he sailed to California with stores for sale.

By the early 1850s Bowden had changed direction with his career, being granted his auctioneer’s licence in 1852.  At this time Bowden was in partnership with Lancelot Threlkeld and the two took over George A Lloyd’s auctioneer’s business in George Street in 1853, trading as Bowden & Threlkeld.  By the end of the decade the partnership appears to have dissolved with Bowden running his own land sales rooms in George Street and later Pitt Street.

Bowden was described in his obituary as one of the leading auctioneers in Sydney running a successful business and acquiring ‘an ample competency’.  While he was not very active in political life he was ‘identified with many movements having for their object the social well being of the community’

By the 1850s Thomas Bowden was looking towards Woollahra as a suitable place to move his family and to invest in land.  By 1857 the Bowdens were living at Kenilworth Lodge, a semi-detached stone house at 88 Wallis Street, Woollahra.  Kenilworth Lodge was built between 1855 and 1858 on allotments of land that ran between Wallis and John Streets. These allotments were part of an area of the Point Piper Estate referred to as Upper Paddington (today the suburb of West Woollahra) which had been subdivided and offered for sale in April 1853.  The builder William Wallis and the ironmonger Charles Scott purchased 25 acres at Upper Paddington and then subdivided the land into 346 allotments ‘suited for first-class Villa Residences’ which they offered for sale by auction on 19 December 1854 (incidentally the auctioneers handling the sale were Bowden & Threlkeld). 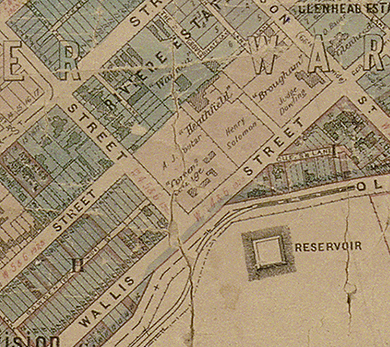 The advertisement for the ‘monster land sale’ lauded the ‘desirableness of its situation, and ‘healthfulness of position’ that commanded ‘magnificent panoramic views of Sydney Harbour, Botany Bay and surrounding country, constantly fanned by sea breezes, with an abundant supply of pure water, and of easy drainage, with building stone at hand, and communication with the city every half-hour by omnibus.’

In 1856 Bowden had also taken up 5 acres of land at the corner of Ocean, Queen and Nelson Street in Woollahra, part of an offer of 99-year leases in the district by the trustees of the Point Piper Estate.

Bowden had moved from his house in Woollahra to Parramatta by 1866 and in May of that year he advertised the sale of the Kenilworth property by auction at his land sale rooms in Pitt Street.  The advertisements in the Sydney Morning Herald described the property in detail.  Each house had 8 rooms and was ‘substantially built of stone and slated’, designed in the ‘Swiss Style’ by the architect John Goold ‘for his own especial use’.  Each property had brick stables and coach houses and the grounds were planted with ornamental and fruit trees.

The house was demolished in 1961 for development as a motel.

Thomas Bowden was officially nominated as a candidate for election to the first Council of Woollahra on 21 May by W Thomas and seconded by Mr Dunk.  He was declared elected to Council on 30 May after receiving 74 votes – the second highest number of votes received by the candidates.

Bowden served only briefly on Council, resigning from his position in August 1860 citing his reason for doing so that he was about to leave the district.  He was replaced by Gerard Phillips in October.  Some years later Bowden did indeed leave the district, moving to Parramatta by 1866.

Once established in Parramatta he was elected alderman on Parramatta Council in 1866, becoming mayor in 1868.

Thomas Bowden died at Newtown on 24 April 1878 aged 72.  His obituary in the Sydney Morning Herald noted that he was admired for his ‘unostentatious benevolence and liberal hospitality’.  His wife Susannah died in Sydney 1881.  Thomas Bowden is commemorated in Bowden Street (which ran as far as Kenilworth Lodge) and Bowden Lane in the suburb of Woollahra.