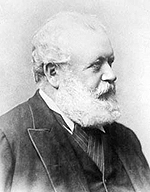 Richard Holdsworth, born in England in 1826, came to the colony of New South Wales as a young child, accompanying his parents John and Elizabeth and his several siblings – William, John and Elizabeth. A third brother, Harry, was born after the family settled in Sydney.

In Sydney, Holdsworth attended the Normal Institute, a school founded by the Reverend Henry Carmichael, earlier an associate of John Dunmore Lang in the establishment of Lang’s Australian College. The young Richard Holdsworth was the recipient of academic prizes for his performance at Carmichael’s Institute.

Following his schooling, Richard Holdsworth was articled as a clerk in the offices of Messrs Carr and Owen, solicitors, before his admission to practise in 1849.

As his career progressed, Richard Holdsworth proved a mentor to younger lawyers, including William Joseph Trickett, the son of Holdsworth’s fellow 1860 councillor Joseph Trickett –later himself an alderman of Woollahra for some 33 years. Holdsworth was appointed in 1872 to examine articled clerks seeking admission to practice as attorneys.

Alfred Tertius Holdsworth, Richard Holdsworth’s only son, followed his father into a career in the law, resulting in the creation of the firm Holdsworth and Son. Alfred Holdsworth was admitted as a solicitor in November 1887 having served under articles of clerkship to Robert Smith, and then, by assignment, to his father.

On 5 August 1856 at St James King Street, Richard Holdsworth had married Emma Rowley, the second daughter of city-based agent John Rowley, and sister of Holdsworth’s first partner, George Rowley. The Holdsworth family initially lived on the eastern fringe of the city in Woolloomooloo, at Craigend Cottage, where their eldest child, Edith Sarah, was born. A further six children were born to Emma and Richard after the family’s move to Aston, Bellevue Hill in 1859. Five of his offspring survived Richard at his death in 1892 – his four daughters, Edith (Mrs Henry Moore), Ida Elizabeth, Amy Beatrice and Florence, and his son Alfred.

On 1 September 1857, Richard Holdsworth purchased the leasehold to 5 acres 2 roods and 5 perches of land, being Lot 46 of the Point Piper estate. The property, on the eastern edge of Bellevue Hill overlooking Rose Bay, had a frontage to what is now known as Victoria Road (then Bellevue Road) and was bound to the south by the landholding of Judge Josephson, now part of the Scots College.

Holdsworth built Aston, described in early Woollahra council rate records as a building of stone and slate. The Holdsworth family was clearly in residence by January 1859, when a notice placed in the Sydney Morning Herald announced the birth of Ida Elizabeth Holdsworth at their residence Ayton [sic] in Rose Bay.

Richard and Emma Holdsworth remained in residence at Aston until 1872, when the family moved to Woodbourne, Elizabeth Bay. For some years Holdsworth’s former house became home to a succession of notable tenants, including Sir Terence Aubrey Murray and William Bede Dalley, before the leasehold was transferred in two portions to Frederick Humphery in November 1875 and July 1876.

The last private householder of Holdsworth’s Aston was Frederick Robert White of Booloominbah, Armidale (now the University of New England) to whom the lease was assigned 30 June 1891, and who secured the freehold conversion ten years later. Frederick  died in 1903, and his beneficiaries took steps in 1926 to develop the former Holdsworth property. In 1927, Aston was demolished and the grounds subdivided into 16 allotments centred on the small roadway Aston Gardens. From 1930 forwards, residential flat buildings were erected on allotments 1 – 14, and the landmark Gilling house Alcooringa built on lots 15 and 16 on the Victoria Road frontage. A building named Aston containing four residential flats was the sole remainder of Holdsworth’s mid-nineteenth century residence.

Richard Ho1dsworth served a total of 8 years 9 months on Woollahra council, his service divided into two periods separated by an absence of seven years. Holdsworth’s presence on the 1860 council confirmed his earlier support for the incorporation of the district, signalled when he had signed the petition of October 1859.

Nominated by Thomas Bowden and seconded by William Thomas on the first Nomination Day, held 21 May 1860, Holdsworth secured 42 votes at the ballot demanded for 28 May1860. This was the second lowest result, and Holdsworth would not have been elected on the results of the initial open voting, held a week earlier on 21 May 1860. However, he survived the re-election process in February 1861, and a year later had the sufficient confidence of his fellow councillors to be elected to the Chair, on 11 February 1862.  Earlier he had been appointed to the committee established to investigate council’s options regarding building the first chambers.

As the only lawyer elected to the first council of Woollahra, Richard Holdsworth brought with him critical knowledge to smooth the progress of the administration in its formative years. Once he was no longer an elected representative, following the February election of 1864, the firm of Rowley and Holdsworth was to handle various of the council’s legal affairs.

Holdsworth stood again for Council in February 1871 and remained an elected member until February 1876. At the council meeting held 11 January 1876, the Council Clerk had reported that Alderman Holdsworth was, 'by reason of non-attendance at three successive monthly meetings of Council', ineligible for re-election at the coming February polls.

Richard and Emma Holdsworth ended their years at Elizabeth Bay, at Woodbourne, which became the setting and focus of family events. These included the untimely death of Emma Holdsworth at only 49 years of age, on 2 September 1877. Richard’s eldest daughter, Edith, was married from Woodbourne on 21 November 1878, marrying Henry Moore MLC at St James Kings Street. His youngest daughter also married from Woodbourne, but in 1899, after Richard’s death.

Richard Holdsworth died at Woodbourne on 7 June 1892, aged 66. An obituary published in the Sydney Morning Herald, 9 June 1892 remarked, ‘a well-known and respected figure has been removed from the ranks of solicitors practising in Sydney.’ Richard Holdsworth was interred at Waverley cemetery, his estate valued at £52,840.

Holdsworth is remembered locally by a street in the suburb of Woollahra, re-named for the early councilor in 1913.