John Gorman arrived in Sydney with his parents Lieutenant Owen Gorman, of the 80th Regiment and Margaret Gorman on 26 Feb 1839.  The family sailed from Mauritius on the Henry. Owen Gorman was appointed as the last Commandant of the penal settlement at Moreton Bay on 21 July 1839.

John Gorman married Isabella Johnston at St Mary's Church, Sydney, on 2 July 1841. Isabella, born in Sydney on 30 July 1830, was one of 12 children of William Johnston and Isabella (nee Cunningham) Johnston, who came to Sydney from Scotland in 1817.

Soon after his arrival in Sydney, John Gorman was appointed an assistant surveyor in the Department of the Surveyor General on 26 March 1839. The position required him to travel throughout the state surveying new towns. He was given the task of planning the new village of Wingham in 1843 and he carried out a survey of the town of Armidale in 1849.

By the mid 1850s Gorman had given up his position as surveyor and was practicing as an auctioneer and estate agent. In 1855 he was employed by Thomas Sutcliffe Mort, auctioneer of wool and other property who built Greenoaks at Darling Point, as an auction salesman of 'landed estates and house properties' in his company.  On 1 January 1856 Mort formed a partnership with his brother, Henry Mort and John Gorman.  The partnership, known as Mort & Company, ran the sales of wool, tallow, land and other property.  Gorman was appointed the auctioneer and salesman managing the 'sales of landed and other properties and all auction sales excepting those of colonial produce'.

After some friction between the partners Mort dissolved the partnership at the end of 1866.  John Gorman then set up his own business as an auctioneer and broker operating from sale rooms in Pitt Street adjacent to Mort's buildings.  Gorman advertised that he would sell by public competition and privately 'land and house property, stock, stations, wool and other colonial produce, ships, government and other debentures and shares in public companies'.

By September 1867 Gorman had set up a business with John H. Miller trading as J.V. Gorman & Miller, Auctioneers, Land, Estate, Stock, Station and Pastoral Produce Agents, the land offices located in Pitt Street and the produce stores at Circular Quay.

John Gorman was active in public life; he was made a fellow of St Johns Catholic College in 1858 and a member of the board of the Dublin International Exhibition in 1865 with the aim of aiding 'with information and advice intending exhibitors'.  He was a witness and foreman of the jury at the inquest held on the loss of the Dunbar at South Head in 1857.

From 1854 parts of the Point Piper Estate in the Woollahra district were offered for lease, and John Gorman acquired a 99-year lease of over 4 acres in Ocean Street on 12 March 1857.  These 99-year leases required that the owners erect first class building or buildings and complete drainage within seven years, and John Gorman wasted no time in erecting a large house on his newly acquired land.  The house, known as Tara, was built during 1857 from stone quarried locally and was situated at what was later known as 62 Ocean Street.

After John's death in 1867, Isabella Gorman retained the leasehold to Tara but moved to a new home in Liverpool Street.  Advertising Tara for lease in February 1868, the property was described as 'a first-class family residence, in thorough order and replete with every convenience, containing twelve rooms, two kitchens, pantry, storeroom, bathrooms, patent closets, laundry, stable, coach-house, harness and man's room, with never-failing supply of water'.

Alfred Stanger Leathes took over occupancy of Tara, eventually acquiring the leasehold before transferring it to Andrew Drysdale in about 1879.  It was then transferred to Augustus Hill in about 1884 and it was under Hill's occupation that the name of the house changed to Rancliffe. 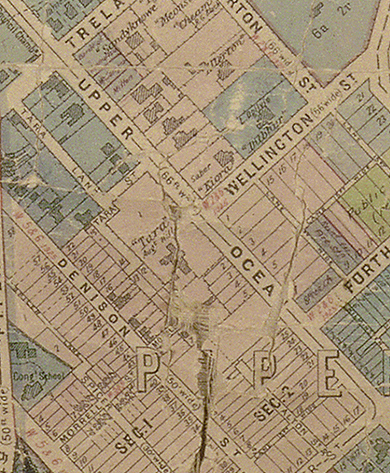 From the close of World War II to its demolition in 1963 the house was operated as a reception centre, hosting numerous society weddings.  Once demolished, Tara was replaced by a block of home units known as Rancliff Gardens.

John Gorman was officially nominated as a candidate for election to the first Council of Woollahra on 21 May 1860 by Charles Gedye and seconded by George Kilminster.  After votes were cast on 28 May he was declared elected to Council on 30 May after receiving 67 of the votes cast.

At the second meeting of the new council held on 26 June 1860, John Gorman was one of two committee members charged with the task of securing the Iron House (which stood at the corner of Edgecliff Road and Ocean Street) for use as council's first chambers.  John Gorman and Samuel Thompson reported at the next council meeting that they had entered into an arrangement for leasing the Iron House as council chambers and clerk and surveyors residence, for two years at a yearly rental of £52.

Gorman's experience as a surveyor was put to good use for the new council.  He, along with Joseph Trickett, was appointed by Council in April 1862 to draw up specifications for the first general survey of the municipality intended to 'describe the streets and show the levels'.
As the first chairman of the Improvement Committee he recommended the carrying out of repairs to Piper (later Queen) Street between Ocean Street and South Head Road - the first road works carried out by Woollahra Council.

John Gorman was elected chairman of Woollahra Council in 1863.  He remained a councillor up to his death; the last meeting he attended was on 8 October 1867.  While on council he had served on the finance, improvement, building, water and by-law committees.