I am reading The Course of Love by Alain de Botton, and find a lot of parallels between de Botton’s description of a married life and my experience of 16 years of marriage.
Staff Pick by Olga

Big Little Lies by Liane Moriarty gave me flashbacks of when the kids were in Infants school and I had to mix on occasions with the other infant school parents – not necessarily a positive experience but it was interesting to read that Liane Moriarty understood my feelings (although about 20 years too late). Reading the book has now made me try a different hairstyle (and hairdresser) as one of the negative descriptions about a parent was a little too close to what I my current hairstyle looked like.
Staff Pick by Joan

The Light Between Oceans by M.L. Stedman. Very Australian, sentimental, well written and easy to read.
Staff Pick by Vicki

The Natural Way of Things by Charlotte Wood is an uncomfortable book to read but I found it well worth spending time on this nightmarish tale of misogyny.

Everywhere I Look by Helen Garner. A marvellous collection of Helen Garner’s diary entries, essays and observations of everyday life which are bound together by her beautiful writing skills.
Staff Pick by Elo

The best book I enjoyed reading this year and learned from it about Australia's historical, social and economic context in the forties and beyond was One Life: My Mother's Story by Kate Grenville.
Staff Pick by Abir

I really liked Six Bedrooms, short stories by Tegan Bennett Daylight, an Australian author whose fiction writing reminded me of Helen Garner’s in many ways. I had never heard of her before but after finishing this, tracked down copies of all of her previous novels and loved all of those as well.
Staff Pick by Kate

The Gene: an Intimate History by Siddhartha Mukherjee. A potent blend of history, philosophy, science and memoir.
Staff Pick by Patra

And I Darken by Kiersten White. How far would you go to save your country? Would you reject family? Start a war? Lada Dragwlya does this and much more to save her homeland.
Staff Pick by Sarah

The Girl on the Train by Paula Hawkins is a psychological thriller told mainly through the eyes of an endearing, yet unreliable narrator. A great read for lovers of novels such as Gone Girl by Gillian Flynn and The Good Girl by Maria Kubica.
Staff Pick by Lexi

In the Shadow of Gallipoli by Robert Bollard 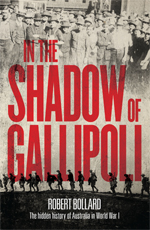 In the Shadow of Gallipoli is a profoundly challenging piece of Australian history. While most books about the First World War concentrate on the doings of soldiers and generals on the battlefield, Robert Bollard’s book looks at a subject that, strangely, has barely been examined: what was happening in Australia as conflict raged overseas.

As Anzacs fought in the trenches and became national heroes, the war at home tore Australia apart. Living standards declined significantly, enormous strikes rocked the country, and opponents of the war were jailed. Even Woollahra was caught up. In October 1916 a near-riot took place as thousands of locals protested a pro-conscription meeting taking place on Oxford Street. As Bollard shows, the First World War left Australia bitterly divided.

In the Shadow of Gallipoli is beautifully written and highly accessible, and reveals a side of our history that is largely forgotten amidst official celebrations of Anzac heroism. 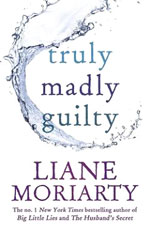 The latest novel from Sydney author Liane Moriarty delivers a now familiar opening to her fans: the end. Her most recent novels, The Husband Secret and Big Little Lies have set upon a trend of teasing readers by revealing the end of the novel right from the beginning, or a very least, half of it.

Truly Madly Guilty is true to Moriarty's form: something awful happens on an ordinary day, in an ordinary Sydney backyard, to three ordinary families. The reader eagerly embarks upon the journey towards a half known end. This is the simple genius of Moriarty's narrative, we have to know and pages are turned at an increasing rate to get to where we know we will be, where we think we will be, before plunging the reader through the depths of human emotion as the true ending is revealed. Just plain ordinary, awful, human emotion.

What becomes increasing clear, as the narrative switches between before and after 'the barbeque' is what appears to be ordinary, is very rarely the case. The tag line of 'ordinary day, ordinary backyard, ordinary people' is far removed from the truth. There is no such thing as an ordinary person, an ordinary friendship, an ordinary marriage.

Truly Madly Guilty serves as a reminder that the lives of Moriarty's readers are full of momentous, amazing, exhilarating, awful, wonderful moments each and every day and that not one of those moments is ever the end of the story. 'Everything will be alright in the end, and if it's not alright, it's not yet the end'. 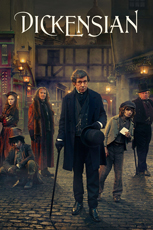 Imagine a world where all of Charles Dickens characters interacted with each other in the one show. This premise is brought to life in Dickensian, a series written by Tony Jordan for the BBC. Part police procedural combined with period drama, the characters are brought together in an investigation of the murder of Jacob Marley.

Leading the investigation is Inspector Bucket from Bleak House and we follow him as he questions the many suspects including Ebenezer Scrooge, Bob Cratchit from A Christmas Carol and Bill Sykes, Fagin and the Artful Dodger from Oliver. There are also intriguing subplots involving supporting characters such as Mrs Gamp, Mr and Mrs Bumble and Mr Wegg. One of the most compelling plotlines is seeing a young Miss Havishman’s eventual ruin by Meriwether Compeyson and her own brother Arthur Havisham for her fortune.

With 20 episodes running at 30 minutes each, Tony Jordan’s previous work for soaps like EastEnders is evident as the intertwining plotlines and cliff hangers pull the viewer in - this is definitely a show made for binge watching!

You don’t have to have an extensive knowledge of Dickens to enjoy this series as the costume and production design are excellent and the performances are fantastic, especially Stephen Rea as Inspector Bucket, Tuppence Middleton as Miss Havisham and Anton Lesser and Fagin.

How I Met Your Father by Aminah Hart 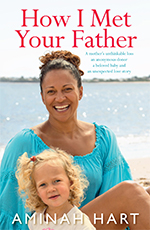 How I Met Your Father is a must read for all those who enjoyed the ABC’s Australian Story on this unlikely romance. It proves that fact is stranger than fiction, when Advertising Executive and IVF single mother in her early forties and a divorced Farmer and father of 4 sperm donor, are united through the love of their child.

How I Met Your Father is more than just an account of this amazing true romance, Aminah guides you through the significant events of her life, takes you on an emotional roller-coaster of highs and lows that makes it impossible to put down.

Aminah Hart recounts her family history dating back to the 1890s with her conservative Presbyterian maternal grandparents. She describes the relationship between her bohemian dancer Australian mother and West Indian aspiring actor father whom met in London during the swinging sixties.  Aminah uncovers what it was like growing up in Melbourne as a half caste child from a single parent family during the seventies and eighties and living the party lifestyle in London as a young single woman. 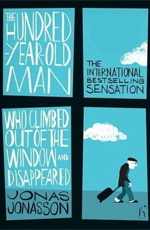 This delightful first book, The Hundred Year Old Man Who Climbed Out the Window and Disappeared by Jonas Jonasson follows Allan Karlsson, a centenarian who escapes from his retirement home through a window just before his own birthday party weaves through twentieth century world events and personalities with humour, cleverness and intrigue.

Having acquired a suitcase full of cash, Allan embarks on an adventure trying to stay ahead of criminals in the present whilst offering and gaining a different perspective on “How things might have transpired”.

If you are interested in an easy light hearted read don’t look any further than this book.

A Brief History of Seven Killings by Marlon James 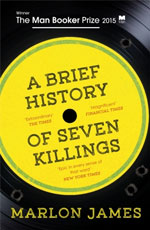 It's certainly not brief, a factual history, or about only seven killings. Jamaican novelist Marlon James’s monumental tale centres around the attempted assassination of reggae star Bob Marley in 1976, a few days before 'The Singer' was to play the 'Smile Jamaica Concert' in Kingston.

The lead up to the event and its aftermath are explored through the voices of many different characters – a very handy 'cast list' is provided in the book – creating an engrossing, complex account of the violence, tensions and power struggles of the era. The telling is epic in the strongest sense of the word, with a wide canvas covering several decades, encompassing Jamaican politics and poverty, extending to relations between the Caribbean and United States, and including issues of race and class. Raw and almost overwhelming at times, this turbulent story is more humane and heartening through James’s insights, dark humour and eye for detail.

In 2015 James was awarded the Man Booker Prize, Britain’s most prestigious literary award, for this multi-layered novel. Not for the faint-hearted, it’s a gripping and challenging read for all 688 pages.

The Whites by Richard Price writing as Harry Brandt 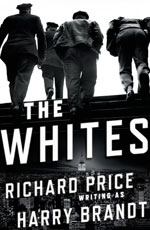 Hailed as one of the best crime novels of 2015, Richard Price, the acclaimed author of Clockers has written The Whites under the pen name of Harry Brandt.

Billy Graves is a sergeant who runs the Manhattan Night Watch - a dead end posting after he was involved in the accidental shooting of a ten year old child. Before the shooting he was a member of the Wild Geese, an elite anti-crime unit. When Billy is called to a crime scene where the victim has connections to a case involving his old comrades in the Wild Geese, friendships are tested and regrets and ghosts from the past come back to haunt Billy, his old crew and even his family.

The term “Whites” refers to cases that the Wild Geese failed to solve and the suspects that got away. Many of the characters in The Whites are haunted by failure and choices that they have made in the past that will have dire consequences in the present. There is a pervading sense of obsession and regret in this novel but the combination of Price’s great dialogue and plot makes for an engaging and thrilling read.

This is recommended for those who likes crime novels with strong characterisation and depth and for anyone who enjoyed the TV series The Wire (Price wrote some episodes of the series) and David Simon’s book Homicide.

My Brilliant Friend by Elena Ferrante 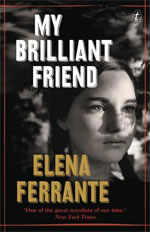 This is the first book of the Neapolitan series, and it follows the friendship between the studious, quiet and determined Elena, who narrates; and the strong-minded and clever Lila.

This is the tale of two girls’ path into womanhood in a poor but vibrant neighbourhood on the outskirts of Naples around 1950, but also an account of a neighbourhood and its social conditions. It is narrated so beautifully that eventually it felt as if I had been living with these families. Highly recommended.