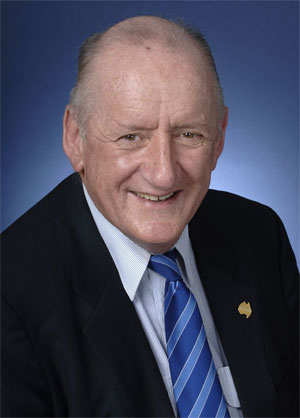 Tim Fischer has succeeded in more careers than most have attempted; from farmer to army officer, from State politician to Australian Deputy Prime Minister. He retired from Federal Parliament in 2001; since then he has hosted three seasons of ABC Radio's The Great Train Show, and from 2009—2012 he became the first Australian Ambassador to the Holy See in Rome.

Mark Twain, but in the one-off category, John Monash of Jerilderie!

Family holidays at the beach at Narrabeen in Sydney years ago, otherwise the Himalayan Kingdom of Bhutan.

Apply scheduled discipline, eg. four hours from 7:30 every Saturday morning to get it done. Morning writing is always a better outcome than late in the day.

What was the best thing about writing Holy See, Unholy Me ?

The chance to research and revisit exciting aspects of recent world history, in and around the Balkans; and of course, in the eternal city of Rome.

Want to know more about Holy See, Unholy Me? 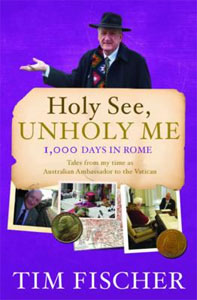 As the first Australian Ambassador to the Holy See, Tim Fischer is the unique position of being able to tell what it's really like in the seat of power in Rome. Here he reflects on his time in the Vatican, the details which made up his life, the protocols, the people and also on the role that religion still has to play in the lives of future generations.

Appointed by Kevin Rudd in 2009, Tim found himself in the singular world of Vatican diplomacy, where, even more than most diplomatic circles, the right word in the right ear is an essential art form, and where the person sitting next to you at dinner could be Colonel Gaddafi or the Pope. Armed with the skills he learned as an activist politician - and with his trusty black Akubra - Tim learned to navigate this strange new world and has lived to tell the tale!