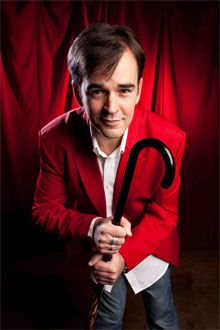 Woollahra Library of course! Great book enthusiasts! And my grandfather frequented it.

"I thought it was a comedy, then discovered it's an autobiography. Such a funny life!" [Shelley Klein, UK Books]

"You can reinvent yourself as yourself."

People needed answers to some big questions about my behaviour.

Want to know more about Carry A Big Stick? 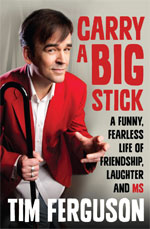 An inspiring memoir that shows we can laugh at adversity or beat it with a great big whacking stick. Tim Ferguson had it all. He was part of the edgy, provocative comedy trio the Doug Anthony Allstars. The three mates began busking on the streets of Canberra and went on to become rock stars of comedy conquering pubs, clubs, theatres and televisions all around the world.

Then, one morning, Tim woke and his whole left side wouldn t work. He'd suspected something was wrong before that day but had done his best to ignore it. If only it was so simple. An eventual diagnosis of multiple sclerosis (MS) meant an end to the frenetic, high-energy life Tim was living. He had to start again He kept his diagnosis to himself, but secrets are a burden. Eventually, he told the world. MS might have changed a lot of things, but Tim's quick wit is still as sharp as ever.

Carry A Big Stick is published by Hachette and available now