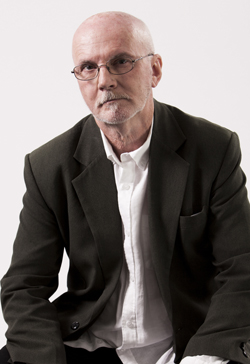 Terry Smyth is an award-winning journalist, playwright, scriptwriter and songwriter. The youngest son of Irish immigrants, he was born and raised in the Hunter Valley, and is now based in Sydney. He has, in his time, worked as a builder’s labourer, steel worker, cotton mill hand, psychiatric nurse, professional musician and advertising copywriter.

Terry has written and produced drama, music and comedy for ABC radio, television and the stage, and continues to write and record original music.

In a 25-year career as a feature writer and columnist with Fairfax Media (on The Newcastle Herald, The Sun-Herald and The Sydney Morning Herald), he wrote extensively on historical, social and cultural subjects, and was more recently the co-founder and editor of the popular Australian history online magazine The Forgotten Times.

Terry has a longstanding interest in colonial Australian history, British and Irish history, and in American history, particularly the American Civil War.

That depends on your definition of ‘good’. I seldom read fiction, and certainly never ‘literary fiction’, whatever that means. Non-fiction, and in particular historical nonfiction, has long been my preference.  For me, a good book is one that has entertained, intrigued or inspired me – preferably all of the above.

The last book to tick all the boxes was In the Kingdom of Ice, by Hampton Sides – the true story of an ill-fated 1880s expedition to the North Pole, and a desperate struggle for survival.  I recently borrowed the book from a friend, and, as is my habit, will probably never return it.

When I was a boy, my favourite library had wheels. It was a van called the Bookmobile, and on the infrequent occasions when the van pulled up outside my school I scrambled to be first out the gate and first on board.  It seemed to me that driving around in a van filled with books was the best job in the world, and I daydreamed about life as a stowaway on a Bookmobile.

That said, my all-time favourite library is the Old Library at Trinity College, Dublin. The library is home to the famous Book of Kells, a magnificent 9th-century illuminated gospel, and, upstairs, the Long Room with its 200,000 old books on towering oak shelves. You can almost smell the collective knowledge in those leather-bound tomes, like education by osmosis.

I was surprised to read on social media that when I’m not writing books I can usually be found on the fairway at Exeter Golf and Country Club, in Devon, England, practising my swing. Not only do I boast a handicap of nine, but I recently scored a hole in one at the ripe old age of 96, setting a new British record.  That’s an impressive feat for someone who has never played golf in his life, has never set foot in Exeter, and is still mercifully short of 96. It seems someone, somewhere, Googled the wrong Terry Smyth.

Many years ago, my late father and I were enjoying a drink at a local pub. On ordering a couple of beers I left the change on the counter.

Lowering his voice so the barman wouldn’t hear, Dad said, ‘If you were 20 cents short of the price of a beer he wouldn’t serve you.’

I’ve since tested that advice and sadly it’s true.

What inspired you to write Napoleon's Australia?

I was about to remove the stump of a dead tree in our garden when my wife Kate noticed tiny green shoots struggling out from cracks in what was left of the bark, and suggested we grant the revenant a reprieve.  A little research confirmed that yes, acacia pycnantha, golden wattle, often regrows from damaged trees, but my research also revealed that golden wattle – Australia’s floral emblem, and native to the east coast of Australia, also grows wild on Saint Helena, a remote island in the South Atlantic.

I learnt that Napoleon Bonaparte, on being exiled to Saint Helena after his defeat at Waterloo, brought golden wattle with him from Empress Josephine’s garden. Josephine, who was enamoured of all things Australian, filled her garden at Malmaison with Australian animals and plants, and Napoleon planted golden wattle on St Helena to remind him of the love of his life. I learnt, too, that there was a time when he could have given her the Great Southern Land itself.

But then, when I told Kate of my serendipitous discovery, she asked, ‘Are you talking about the grevillea?

‘The stump that’s flowering again is a grevillea.’

‘Of course I’m sure.

Anyone can tell a grevillea from a wattle.’    Anyone but me, apparently.  Still, had it not been for my appalling ignorance of native flora, Napoleon’s Australia would not have been written. 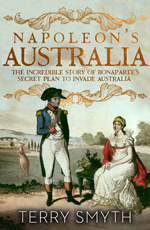 In the northern winter of 1814, a French armada set sail for New South Wales. The armada’s mission was the invasion of Sydney, and its inspiration and its fate were interwoven with one of history’s greatest love stories – that of Napoleon and Josephine.

The Empress Josephine was fascinated by all things Australian. In the gardens of her grand estate, Malmaison, she kept kangaroos, emus, black swans and other Australian animals, along with hundreds of native plants brought back by French explorers in peacetime. And even when war raged between France and Britain, ships known to be carrying Australian flora and fauna for ‘Josephine’s Ark’ were given safe passage.

Napoleon, too, had an abiding interest in Australia, but for quite different reasons. What Britain and its Australian colonies did not know was that French explorers visiting these shores, purporting to be naturalists on scientific expeditions, were in fact spies, gathering vital information on the colony’s defences. It was ripe for the picking.

The conquest of Australia was on Bonaparte’s agenda for world domination, and detailed plans had been made for the invasion, and for how French Australia would be governed. How it all came together and how it fell apart is a remarkable tale – history with an element of the ‘What if?’ No less remarkable is how the tempestuous relationship between Napoleon and his empress affected the fate of the Great Southern Land.