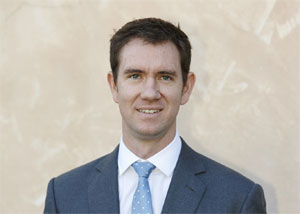 Sam Crosby is executive director of the McKell Institute. He previously served as corporate and government affairs manager for Johnson & Johnson, senior advisor and chief of staff to a number of cabinet ministers in the NSW state government and advisor to former Prime Minister Kevin Rudd.

Killing Fairfax by Pamela Williams. That said, Fairfax run my opinion pieces... So I'll say something less controversial like What the Dog Saw by Malcolm Gladwell.

I love the State Library's main reading room. That said, it's too easy to lose yourself in the ambiance of the room and get distracted with the vaulted ceilings and book lined walls. If I actually need to work I'll go to Sydney Uni's law school library. As soon as I'm there the years of drudgery kick back in from my undergrad days studying economics and I cram like its the night before an exam.

Anything on Twitter. There's something about the relative anonymity and the requirement for brevity that produces real bile in people. It's hateful and vindictive and straight up bizarre. For the record, I'm not a communist Nazi fascist who hates Australia, murders refugees and small puppies.

My grandmother was a librarian who prized reading above all else. She was a voracious reader but I had dyslexia and a reading age well below where it should be so I really struggled. My Nanna told me not to worry and I should "Read fun books or read comics, read the back of a cereal box" she said "It doesn't matter - just read anything!".

That's great advice at the best of times but for a kid really struggling with the basics, that permission to read fun or silly things meant the everything. As I developed my reading and got on top of my dyslexia I was left with a deep love of books and stories they hold - its stayed with me ever since.

What inspired you to write The Trust Deficit?

This issue would keep arising every six months and I kept reading all this commentary that I just thought was wrong. Journalists and media commentators kept conflating all these different qualities or problems and labelling them amorphously 'trust'.

The more I read and researched the more I realised that there were models of recent examples for how trust can be rebuilt but someone needed to tell those stories. These stories tapped into academic models and biological occurrences that seemed to fit together. At some stage I just thought, 'why not'. Ten months later I had a book!

Want to know more about The Trust Deficit? 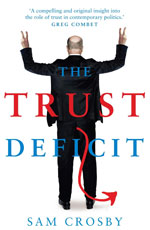 Trust is the most powerful weapon in the political arsenal. It can pierce an opponent's armour or deflect the most ferocious attack. It can explain difficult policies, and become a well of goodwill that politicians can draw from in their darkest hours. Yet despite its great value we are resigned to the idea that trust in politics will continue to decline.

Drawing on contemporary political stories and examples, The Trust Deficit shows us how faith in our politicians has been eroded but how it can be rebuilt.

Julia Gillard's pledge that there wouldn't be a carbon tax and Tony Abbott's promise of no cuts to health or education saw a collapse in their governments' levels of support.

By breaking trust down to its elements - reliability and competence, openness and honesty - we see how recent leaders established trust and used it to their political advantage.