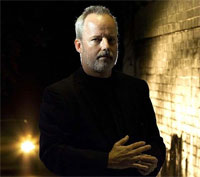 Before writing full-time Michael Robotham was an investigative journalist in Britain, Australia and the US. He is the pseudonymous author of ten best-selling non-fiction titles, involving prominent figures in the military, the arts, sport and science. He lives in Sydney with his wife and three daughters.

That's an unfair question. It's like asking me to choose my favourite daughter (I have three of them). Growing up, I was a huge Ray Bradbury fan and then graduated to F. Scott Fitzgerald, Hemingway and Steinbeck.

Then I graduated on to John Irving, particularly his early novels like The World According To Garp and A Prayer For Owen Meany .

Since I'm a crime writers, I should mention that genre. Peter Temple is a genius and James Lee Burke a legend. It's a broad church, but the true quality can be found.

When I was 27 I travelled overland from London to Kathmandu in the back of a truck with twenty hardy souls. We entered Iran on the day the US shot down an Iranian passenger jet. We entered Pakistan in the midst of riots. We were arrested in India for setting off fireworks. And we survived an earthquake in Nepal. The holiday was nothing if not memorable.

Write, write and when you're sick of writing, write some more. It's the only way you get better. And should you by some chance find minutes when you aren't writing, make sure you're reading.

It's not the truly great books that inspire me to write. Some are so wonderful I get depressed because I realise that I'll never be that good. It's the lesser books - the ones that I read and think, hey, this could have been so much better if only the author had this or that.

Ones I've replayed the moment I met my wife and I watched three daughters being born. I'd like to relive the night that my first novel The Suspect was the subject of a bidding war at the London Book Fair in 2002. We were lying in bed at 3.00 a.m. getting phone calls from my London agent, telling us about the deals being done. It was like winning the lottery. Every dream I ever had of being a novelist came true that night.

What was the best thing about writing Say You're Sorry?

The best thing about writing Say You're Sorry was creating the voice of Piper Hadley, a remarkable teenage girl who, despite being kidnapped and imprisoned, never loses her sense of humour or humanity. I felt as though I lived in Piper's head for a year while writing the novel. I grew to love her and I knew I had to save her.

Want to know more about Say You're Sorry?

When Piper and her friend Tash disappeared, there was a huge police search, but they were never found. Now Tash, reaching breaking point at the abuse their captor has inflicted on them, has escaped, promising to come back for Piper.

Clinical psychologist Joe O'Loughlin and his stalwart companion, ex-cop Vincent Ruiz, force the police to re-open the case after Joe is called in to assess the possible killer of a couple in their own home and finds a connection to the missing girls. But they are racing against time to save Piper from someone with an evil, calculating and twisted mind...