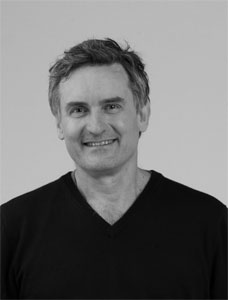 Richard Glover is the author of three stage shows and many books, including Desperate Husbands and George Clooney’s Haircut and Other Cries For Help. His weekly column has appeared in the Sydney Morning Herald since 1985. He presents the hugely popular Drive show on ABC 702 in Sydney.

I’ve just finished Geraldine Brook’s The Secret Chord. It’s the Bible meets Wolf Hall meets Game of Thrones. Just reading it brings a charge of adrenalin, as well as making you feel part as if you spent time in the Bronze Age middle east.

I did history honours at the University of Sydney and spent the best part of a year in the Mitchell Reading Room at the State Library of NSW. The glorious surroundings helped me feel like a scholar even during those moments when my temperament and intelligence looked like failing me.

I’ve failed so far to have my books published in the UK – even though the latest is partly set there – and yet I’m a relatively big hit in Poland – a country with which I have no connection. Still, I’ve always thought the Poles were great judges of writing...

The best piece of advice about writing is that it should feel difficult; it should feel like a stretch to capture things accurately. Thomas Mann put it most elegantly: 'A writer is someone for whom writing is more difficult than it is for other people.'

What inspired you to write Flesh Wounds?

The book is very fierce on the idea that you can be a good parent, even if you haven’t had good parenting yourself. We talk as if nearly everyone had a mother and father who loved them, but I think there’s a very large minority who didn’t get the love they would want to give a child of their own. And yet we are not all mad and dysfunctional. We find the love elsewhere and go on to live healthy lives. And we also go on to be good parents. It’s all part of the amazing resilience of human beings. In this book you do meet some bad people, but also some very good people. It is sometimes possible in life to allow the good people to have the loudest voice – and that’s really what I wanted to capture in the book. 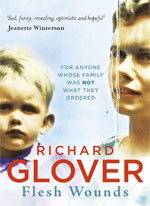 A mother who invented her past, a father who was often absent, a son who wondered if this could really be his family.

Richard Glover's favourite dinner party game is called 'Who's Got the Weirdest Parents?'. It's a game he always thinks he'll win. There was his mother, a deluded snob, who made up large swathes of her past and who ran away with Richard's English teacher, a Tolkien devotee, nudist and stuffed-toy collector. There was his father, a distant alcoholic, who ran through a gamut of wives, yachts and failed dreams. And there was Richard himself, a confused teenager, vulnerable to strange men, trying to find a family he could belong to. As he eventually accepted, the only way to make sense of the present was to go back to the past - but beware of what you might find there. Truth can leave wounds - even if they are only flesh wounds.

Part poignant family memoir, part rollicking venture into a 1970s Australia, this is a book for anyone who's wondered if their family is the oddest one on the planet. The answer: 'No'. There is always something stranger out there.

Flesh Wounds is published by HarperCollins and available now