One of Australia's best known broadcasters, Phillip Adams is also an author, a film-maker, a former advertising moghul, a highly popular columnist for The Australian's weekend magazine, and a prominent member of the Society of Sceptics. He is the nightly host of ABC Radio National’s flagship program, Late Night Live, where he chats with the best and most interesting thinkers, doers and crackpots from around the world.

Carpentier, the Cuban genius who more or less invented 'magical realism'. The Lost Steps is his masterpiece.

Two or three off-season in Venice. Over the decades they've blurred together. If there's life after death, I'm going to nominate Venice as my personal heaven.

From early childhood I wrote 'in my head' constantly. Everywhere I went I tried to observe with frenzied intensity – to put what was happening into words. Colours, textures, faces, responses. Equally important for any would-be writer is endless and constant reading. Reading and writing, chicken and egg.

The birth of Rebecca, my first daughter. It was at a time when fathers were still being refused admittance to the labour ward. I gatecrashed and rejoiced in watching a remarkable human being make her smiling and gurgling entry into the world.

What was the best thing about writing Bedtime Stories?

Simply sitting back remembering things. Many of them hilarious. Late Night Live is a series of disasters punctuated by crises and catastrophes – with me trying to pretend that everything is going smoothly.

And here's an answer to a question that I haven't been asked by the Woollahra Library. Pretty much my entire education came from the local municipal library. I was raised on a dirt poor farm by my grandparents who couldn't afford to buy books. So I became a fixture at the local library and, having read my way through all the Williams and Biggles and Mary Grant Bruces I was given my first 'grown up' book by the librarian. The Grapes of Wrath by John Steinbeck. It changed my life forever. The municipal library is one of the greatest achievements in human history – and let us pay credit to Benjamin Franklin for creating perhaps the very first. It was a much greater invention than his lightning rod. 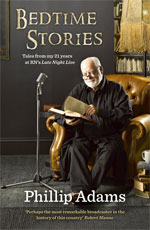 For 21 years Phillip Adams has been the witty, smooth and informed voice of Late Night Live on ABC Radio National. In the studio he bats questions to world leaders, thinkers, ideologues, crackpots and gurus. But what about the stories that don’t make it to air? The ones about the guests who don’t behave, the tricky questions that must be asked, the interviewees who don’t pause for breath or – worse – who refuse to speak?

Here, Phillip shares the secrets of his radio days from when he was looked upon as a commercial upstart to when Henry Kissinger, Christopher Hitchens, Kevin Rudd and so many others have lined up to be interviewed by him. He reflects on the sometimes comic, sometimes poignant, sometimes fraught art of putting together live radio, for a show where anything could happen and almost everything has.