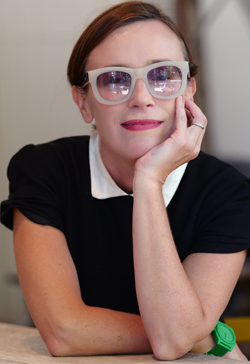 Nikki Gemmell is the author of nine novels and four works of non-fiction. Her books have been translated into 22 languages. She is a columnist for The Australian.

Women and Power, by Mary Beard. There's so much common sense in it, examining the suppression of the female voice over several thousand years. And it's short. I love short right now. Have no time for anything else - just too swamped.

My beloved and deeply eccentric London Library, where I wrote three novels while living in that glorious city. The library was set up by Dickens in the 1840s as a toolhouse for writers, and has admirably served its purpose ever since. In one of its dictionaries there's Virginia Woolf's thumb print next to the F word - the library is brimming with delicious stories like that.

When I was writing there Tom Stoppard was its president. It's run along the lines of a gentleman's club - you have to be a member. But anyone can join, and it's worth every cent/pence. I'd encourage any Aussie in London to do it.

In your neck of the woods - the Watsons Bay Library. I went to a book launch there and was blown away by the beauty of the location, right on the harbour's edge, and the cool factor of that tiny space. I'll declare it right now: Watsons Bay Library is the coolest library in the world.

That I am the female Jack Kerouac (according to a a French publication). Really? Hopefully a little more clean living.

Write as if you're dying - it's a great motivator. And try and try again. Writing is all about tenacity and persistence, as is any artistic endeavour. You've got to have grit to succeed.

I was drowning in noise. I had an agitation of the soul, living within the madness of the city, and couldn't simplify my life. While working on my book I wrote myself into quiet - it was medicine for the soul. Good medicine. Quiet rescues.

Want to read more about On Quiet? 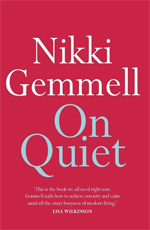 Quiet comes as a shock in these troubled times.

Quietism means 'devotional contemplation and abandonment of the will . a calm acceptance of things as they are'. Gemmell makes the case for why quiet is steadily gaining ground in this noisy age: Why we need it now more than ever. How to glean quiet, hold on to it, and work within it.

On Quiet is available now from Melbourne University Press