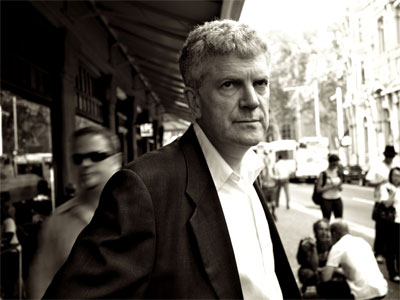 Michael Duffy has worked for the Sydney Morning Herald and the Sun Herald as a reporter of crime and other urban issues. He has written two true crime books and the novels The Tower, about crime and globalisation, and The Simple Death, about voluntary euthanasia and the law.

I’m actually very keen on those multi-authored American TV series at the moment, such as The Sopranos and The Wire and Breaking Bad . I think they have something to offer writers of crime fiction novels, particularly in the profoundly flawed nature of their characters. As for books, in recent years I’ve read every novel by Pete Dexter and enjoyed them hugely.

I guess the bad ones stick. It was a cherry-picking expedition to Young just after I’d finished school. Heat like I’d never encountered and fellow workers who wanted to hurt us city kids badly. The rats in the woolshed and the farmer who at night told us to pitch our tent on what turned out to be the road home from the pub for some of his more violent neighbours. Memories …

Just write. Write a lot. If you find this difficult you are not meant to be a writer and should be relieved.

I’ll have to get back to you on that.

What was the best thing about writing Drive By?

I had invented the idea of John Habib, member of a Lebanese crime family, but didn’t feel confident enough to write the character. This was depressing. Then purely by coincidence I was called to give evidence at Burwood local court, the epicentre of the justice system in south-west Sydney.

I had to spend seven hours in the waiting room, surrounded by Lebanese criminals and their families. (I covered trials for several years for the Sydney Morning Herald and found that for some reason, Lebanese crooks always get much more family support than anyone else. It’s not unusual to find a dozen or more family and friends at a trial. Most crims are lucky to have a couple of supporters in court.) The accused and their families spoke fairly openly to each other about their various offences, time in jail, friends and family who were caught up with police and courts and prison. By the end of that day I had a sense of John’s voice, and of what his family and life were like. That felt good – it was like I’d received an unexpected gift.

Want to know more about Drive By? 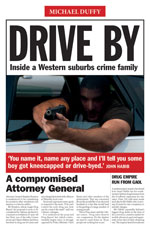 John Habib is the mechanic son of a Muslim Lebanese-Australian crime family in Sydney’s Western suburbs. His oldest brother is in a maximum security-prison, his middle brother is becoming increasingly fundamentalist, and his young brother Rafi is on trial for a murder he swears he didn’t commit. John has no reason to disbelieve Rafi but there are things going on in the family that he just doesn’t understand. Why has his brother taken control of the family away from their father? Are the police really trying to set up Rafi? John sets out to prove Rafi’s innocence in the face of his predatory older brothers and some Lebanese-hating cops.

Bec Ralston is a good detective who doesn’t know why she’s been ordered to attend Rafi’s trial. She was previously thrown off the investigation for voicing the opinion that Rafi might be innocent. As the court case goes pear shaped, she finds herself torn between her loyalty to the senior police she respects, and the truth.