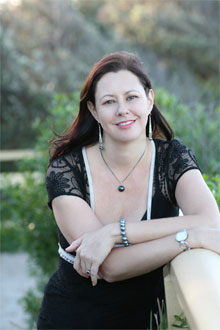 Kate Forsyth is the internationally bestselling author of more than thirty books, including The Witches of Eileanan and Rhiannon's Ride fantasy series for adults. She completed a doctorate in fairytale retellings and the novels that have come out of this fascination include the winner of the 2015 American Libraries Association Prize for Historical Fiction, Bitter Greens and The Wild Girl. Her books have been published in seventeen different countries, including Japan, Poland, Spain, Russia and Turkey. Kate has also written series for children of all ages and the contemporary novel Dancing on Knives.

Gordon Library on the North Shore of Sydney was an enormous part of my childhood, and so it will always be my favourite. I did a talk there recently and it was incredible to be back. I expected to see the ghost of myself, a little girl with crooked plaits, sitting on the floor with her nose in her book…

Nobody's ever written anything strange about me! I can tell you the nicest thing. "Kate Forsyth is one of the finest writers of this generation." I liked that!

I've just finished writing a retelling of the Grimms' Beauty and the Beast, set in Nazi Germany. Called The Beasts’s Garden, it will be released in August. I've been fascinated by the Second World War since I first read Anne Frank's diary when I was twelve, and have always wanted to set a novel in this time period.

I'd been working away on my novel The Wild Girl, which tells the story of the forbidden romance between Wilhelm Grimm and Dortchen Wild, the young woman who told him many of the Grimms' most famous fairy tales. I was particularly taken with her version of Beauty and the Beast, and was thinking that one day I'd like to retell it.

One morning, as I lay in the shadowlands between sleeping and waking, the idea just came to me, like a flash - retell the tale, but set it in the underground resistance to Hitler in Germany during the Second World War. I was absolutely electrified and started planning the book that very day.

Want to know more about The Beast's Garden? 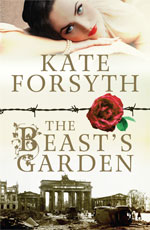 It's August 1939 in Germany, and Ava's world is in turmoil. To save her father, she must marry a young Nazi officer, Leo von Löwenstein, who works for Hitler's spy chief in Berlin. However, she hates and fears the brutal Nazi regime, and finds herself compelled to stand against it.

Ava joins an underground resistance movement that seeks to help victims survive the horrors of the German war machine. But she must live a double life, hiding her true feelings from her husband, even as she falls in love with him.

Gradually she comes to realise that Leo is part of a dangerous conspiracy to assassinate Hitler. As Berlin is bombed into ruins, the Gestapo ruthlessly hunt down all resistance and Ava finds herself living hand-to-mouth in the rubble of the shell-shocked city. Both her life and Leo's hang in the balance.

Filled with danger, intrigue and romance, The Beast's Garden, a retelling of the Grimm brothers' ‘Beauty and The Beast', is a beautiful, compelling love story set in a time when the world seemed on the brink of collapse.

The Beast's Garden is published by Random House and available now