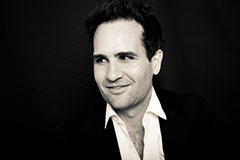 Josh Wakely is the Australian creator, director and producer of the children's animated series "Beat Bugs", a Netflix original program that premiered worldwide on August 3, 2016. Inspired by music made famous by the Beatles, the series tells uplifting and life-affirming stories filled with hope and melody.

Wakely was raised in Newcastle and grew up in a household that was filled with music and was motivated by the belief that storytelling is the core of both script writing and song-writing, and this belief has guided him in his career. Josh, a principal partner at GRACE: A Storytelling Company, a film and television production company splits his time between Los Angeles and Sydney with his wife and son.

I’m a massive fan of Dave Eggers. I recently got his new book Your Fathers, Where Are They? And Your Prophets, Do They Live Forever? and The Circle as well. I tend to consume them pretty quickly. I read a lot of non-fiction. I’ve also optioned the rights to Darren Strauss’s Half a Life, and reread that recently. It’s such an exquisitely written book.

I once rehearsed a play in the Bondi Pavilion and have fond memories of going there and seeing a pop up library at the beach. The Newcastle Library where I grew up is also where I read many a great book and would lay there for hours learning about film and TV. It was there that I read my very first screenplays, which helped set me on the path that I’m on today.

Myself and Daniels Johns are both from Newcastle and met professionally in our late 20s and worked together a lot. But nearly every article talks about our long childhood friendship, which I’ve never mentioned. It seems to now have been printed enough times that’s it’s moved from fiction to fact. But I actually didn’t know him until much later in my life.

I often repeat the mantra that you only get one life, so push through fear and nerves because there is no dress rehearsal in life. Recently I was at a Pearl Jam concert, and someone suffering from a neurological disease said “Life is always how you choose to feel about it” and essentially though we can’t control everything, we can control, to the best of our abilities, our response to it. That really affected me as a piece of information.

What inspired you to create and write films and TV shows?

I find music, people, and the world endlessly inspiring. There are so many great stories and so little time to tell them.

Want to hear more of Josh's story and Beat Bugs?

Beat Bugs is an animated children’s comedy television series, revolving around the adventures of five friendly child-like bugs who live in an overgrown backyard. They go on magical mystery tours, help a fallen blackbird, and much more, all to the tune of our favourite Beatles’ songs performed by artists such as Pink, Eddie Veder, Sia, and many more.

Beat Bugs is airing on Seven2 and Netflix worldwide and is available now. Take a look!