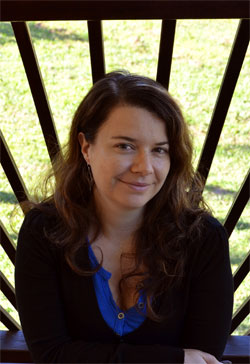 Jessie Cole grew up in an isolated valley in Northern NSW, and lived a bush childhood of creek swimming and barefoot free-range adventuring. As a child she travelled widely with her family, backpacking throughout Asia and Italy.

In 2009 she was awarded a HarperCollins Varuna Award for Manuscript Development, leading to the publication of her first novel Darkness on the Edge of Town, which has been shortlisted for the 2013 ALS Gold Medal and longlisted for the Dobbie Literary Award. Her work has also appeared in Meanjin, Kill Your Darlings, Island Magazine, Big Issue, Daily Life and the Guardian.

She lives in her family home with her two sons, her mother, her soulful dog, two cats, and various carpet snakes.

I’m an eclectic reader so this is a hard one to narrow down. I’m thinking perhaps Anne Michaels. Her last book The Winter Vault was such a delicate mix of historical detail and emotion. She’s a mesmerising, poetic writer but her literariness doesn’t at all take away from the complexity and depth of the feeling portrayed. Creating a balance between aesthetically pleasing language and depth of feeling can often be a bit difficult, but Michaels does it well. You don’t know whether to cry because the language is impossibly beautiful or because the story itself is so moving. Also, reading her books open up whole new areas of knowledge. It’s extraordinary what she fits in!

My parents were avid travellers and as a child I did a lot of backpacking. With hindsight I can see they were quite fanatical: stay off the beaten track, always carry your own pack, do as the locals do. I don’t know how they did it all with small children.

When I was eight we went to Japan for a month and travelled around the countryside staying in traditional Japanese Inns. The Japanese have a kind of reverence for children and everywhere we went we were treated very gently, so I have particularly poignant memories of that trip. I remember going to a restaurant and the staff staying late after closing time to make paper aeroplanes with us and fly them around the room. Also, if we behaved ourselves we were allowed to race down to the corner store in the afternoon to buy something from the 100 yen machine. This was at the height of the ‘transformers’ craze, so my brother and I built up quite a collection. It’s probably the first holiday I remember in any detail.

For me, it’s about delving into the hidden. Whatever it is that keeps you awake at night – that niggling conundrum you think about in your most private spaces, that you don’t know how to begin to talk about – that’s where the best stories lie. I like to imagine that I’m telling myself secrets. It’s just between me and me.

There is something incredibly freeing about that concept because there is no critic. What does it matter if it’s not any good if you’re just telling yourself? And really, the story has to be pretty compelling if you feel the need to whisper it in the dark. Whisper it just so you yourself will hear. I also like to sit on things for quite a while before I share them. So then the act of writing and the act of sharing that writing become completely separate. That’s how it works for me!

I would like to replay the moment when I first saw my children’s faces. It’s so monumental to meet that being you’ve grown inside you – and you know it at the time, and you try to memorise every nuance of their wise-eyed little faces, but somehow you can’t. And the older my children get the harder it is to envisage their newborn faces. I would like to be able to replay the first hours after their birth, to imprint the image of them again and again on my mind.

What was the best thing about writing Darkness on the Edge of Town?

Darkness on the Edge of Town was a cathartic book to write on many levels, but the best thing about the process was giving myself permission to stand in the shoes of a man. It’s easy to say to yourself – ‘How would I know what that’s like?’ But I really wanted to know. I was deeply curious. In hindsight it’s hard for me to imagine how I had the gall, but at the time being Vincent felt surprisingly natural to me – and it was a relief from being myself.

Writing a book is a kind of ‘world building’ and depending on how long it takes, you get to inhabit that other world for quite a while. Inhabiting Vincent allowed me to experience things I never would in my actual life. There is something thrilling about shedding your skin and inhabiting another.

Want to know more about Darkness on the Edge of Town?

Vincent is nearly forty years old, with little to show for his life except his precious sixteen-year-old daughter, Gemma: sensitive, insightful and wise beyond her years.

When a stranger crashes her car outside Vincent and Gemma′s bush home, their lives take a dramatic turn. In an effort to help the stranded woman, father and daughter are drawn into a world of unexpected and life-changing consequences.

Darkness on the Edge of Town is a haunting tale that beguiles the reader with its deceptively simple prose, its gripping and unrelenting tensions, and its disturbing yet tender observations.